Better training for teachers to understand ADHD and how to deal with it in the classroom is more important than targeted funding to support the student at school, ADHD experts say.

“It’s a real misunderstanding that funding will mean adjustments have been provided and the adjustments are appropriate,” said Louise Kuchel, spokeswoman for Parents for ADHD Advocacy Australia. “A teacher who understands what to do does not necessarily require any funding to be able to provide the appropriate adjustments.” 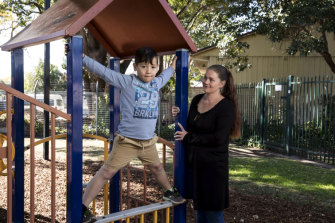 Chanel Hennessey with her son Elijah, 6, who has ADHD.Credit:Dominic Lorrimer

The Parents for ADHD Advocacy Australia survey of more than 1000 parents of children with ADHD found only 42 per cent thought classroom teachers had good or excellent knowledge of ADHD and the figures were even lower for principals at 27 per cent and school counsellors at 25 per cent.

One in three parents rated their schools’ strategies for supporting students with ADHD as poor/non-existent or inadequate, while an equal proportion rated them as good or excellent.

Only 17 per cent of respondents said their child received funding through the school, and it was most commonly used to pay a teacher’s aide. However, nearly half of parents were unsure if the aide had ADHD-specific training and only one in five were sure they did.

The report called on governments to recognise ADHD as a disability with serious risk to learning and a child's ability to self-regulate and review criteria for targeted funding to improve support and reduce requests for escalated diagnosis.

Chanel Hennessey has found her local public primary school in the inner west of Sydney very supportive of her son Elijah, 6, who was diagnosed with ADHD last year.

The school has never questioned the diagnosis nor the family’s decision not to use medication. Instead they proactively put strategies in place to help him, including initiating an occupational therapy program to help him with his handwriting, buying a “wobble chair” recommended by Elijah’s psychologist to help him concentrate, and ensuring he has enough breaks.

"What has made the most difference is that his teacher had an open mind and took the time to get to know him before he was in her classroom, and she has also had further professional training," Ms Hennessey said.

Ms Hennessey supports flexible funding for schools but having seen the difference a well-trained teacher can make, she would prioritise that over targeted funding for a teacher's aide to work with her son.

Professor Linda Graham from the Queensland University of Technology, who has studied the NSW education system, said teacher’s aides had become “the default option for most kids with disabilities” and this came at considerable expense.

“You're putting the least qualified person with the child that needs the most qualified person, you're teaching learned dependency, and you end up stigmatising the child because they're constantly being followed around,” Professor Graham said. “They're used as a band-aid solution.”

Professor Graham said it was more important to upskill teachers and release them from face-to-face time so they could plan, learn about inclusive practice and how to organise a lesson. When children with ADHD "derailed" a classroom, it was usually because teachers moved through the material too quickly, used complex language, described things in abstract ways, or gave multipart instructions without visual prompts.

He said funding should be on the basis of need rather than diagnosis. "There are some students with disabilities who are top of their class and require no additional support," he said.

“Both are required because they work synergistically to assist the young person,” Dr Kohn said.

The NSW Teachers Federation acting deputy president Henry Rajendra said funding was required support students with disabilities, whether it was used to give children more one-on-one attention or more professional learning for teachers.

"It's not an either/or – these kids deserve the full breadth of support," Mr Rajendra said.

The NSW Department of Education released its Disability Strategy in February this year, following a parliamentary inquiry into children with a disability or special needs that ran from 2016 to 2018.

A spokesman said the strategy included strengthened support for teachers and other support staff to ensure that they were well equipped to educate students with disability. Last week the department launched a scholarship program for teachers to undertake a Masters in special education, with graduates to become part of a network of leaders in inclusive education.