When Alok Narayan was training as an orthopedic surgeon, patients would fixate on his red, inflamed hands from eczema and ask, "Is it contagious?"

It wasn't. But the questions, the pain, the discomfort and the relentless itchiness –  his eczema first appeared as spots on his face nine years ago, spread to his hands and is now all over his body –  meant he'd often stay home.

"You can't work, because it is too hard to answer those questions," said Mr Narayan of Ryde.  At night, the itching was worse, meaning it was hard to sleep. If he scratched,  he risked infection and bleeding.

Now 36, he switched to occupational medicine before finishing his medical training because there was less scrubbing, and less exposure to soaps and allergens than as an orthopedic surgeon.

People with severe eczema are often shunned like lepers yet what they have can't be caught. Nor is there a cure.

Mr Narayan said he has had "a thousand tests" yet "nothing comes back positive" except to say he has an active auto immune system and needs to be careful of changes in the weather.

Maria Said, the chief executive of Allergy & Anaphylaxis Australia (A&AA), hears many stories where sufferers are shunned, isolated and feel hopeless.  About 800,000 Australians have atopic dermatitis (also known as eczema), including  27,000 Australians who have severe conditions.

On Monday, AAA released a study of 100 Australians suffering from atopic dermatitis which found it had a devastating impact on sufferers' work and family life. 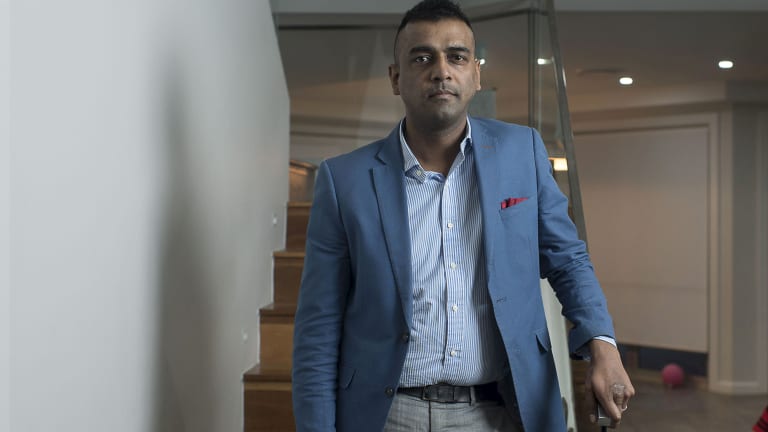 Alok Narayan has severe atopic dermatitis, or eczema. There is no cure.

"There is no cure, and a lot of allergic diseases (such as allergic rhinitis, allergic asthma, food allergy) are the same," said Ms Said. "There is nobody saying we have hope," she said.

A woman with severe eczema working in a beauty salon told Ms Said that she was "put out the back because she was not good for business".

"You look hideous, or you try to cover up, but you can't sit still, you are constantly wriggling and scratching," said Ms Said. "People are always telling you to  'stop scratching'. You feel like slapping them across the face and saying 'don't bloody well tell me to stop scratching'."

Her own eczema was "minute" compared to severe cases where people are bedridden or unable to work.

"When you are itchy and it all over you, it is in your core and it feels like you are scratching from the inside out, and you can't get to the real itch," she said.

The Peak Study by the International Centre for Community Driven Research found 40 per cent of people who have atopic dermatitis suffer depression and anxiety, 85 per cent of people with severe or very severe AD have trouble sleeping, and many find it affects their relationships.

Often starting as a rash, common symptoms include red to brown patches and small raised bumps, which may leak fluid and crust over when scratched, and thickened, dry and scaly skin.

Often people didn't understand how debilitating eczema could be, said Ms Said.  Activities are limited by the weather – if it too hot, humidity aggravates the itchiness and the saltiness of sweat "stings like hell", for example.

Caring for the inflamed and itchy skin takes hours  –  and many people withdraw from society.

"They're often told nothing more can be done. So they stop going to specialists and slowly withdraw from society," she said.

Mr Narayan would "love for new treatment to come out."

"It is disappointing to go through months of treatment and then they say, 'There is nothing I can do for you'," he said.