Although concurrent Mtb/CoV2 infection can exacerbate the symptoms of TB, the COVID 19 mortality rate among individuals with a previous Mtb infection appears to be lower. This could be due to a similarity between CoV2 antigens and proteins expressed by the Mycobacterium spp.

Thus, a prior TB infection will likely confer heterologous immunity against SARS-CoV-2. 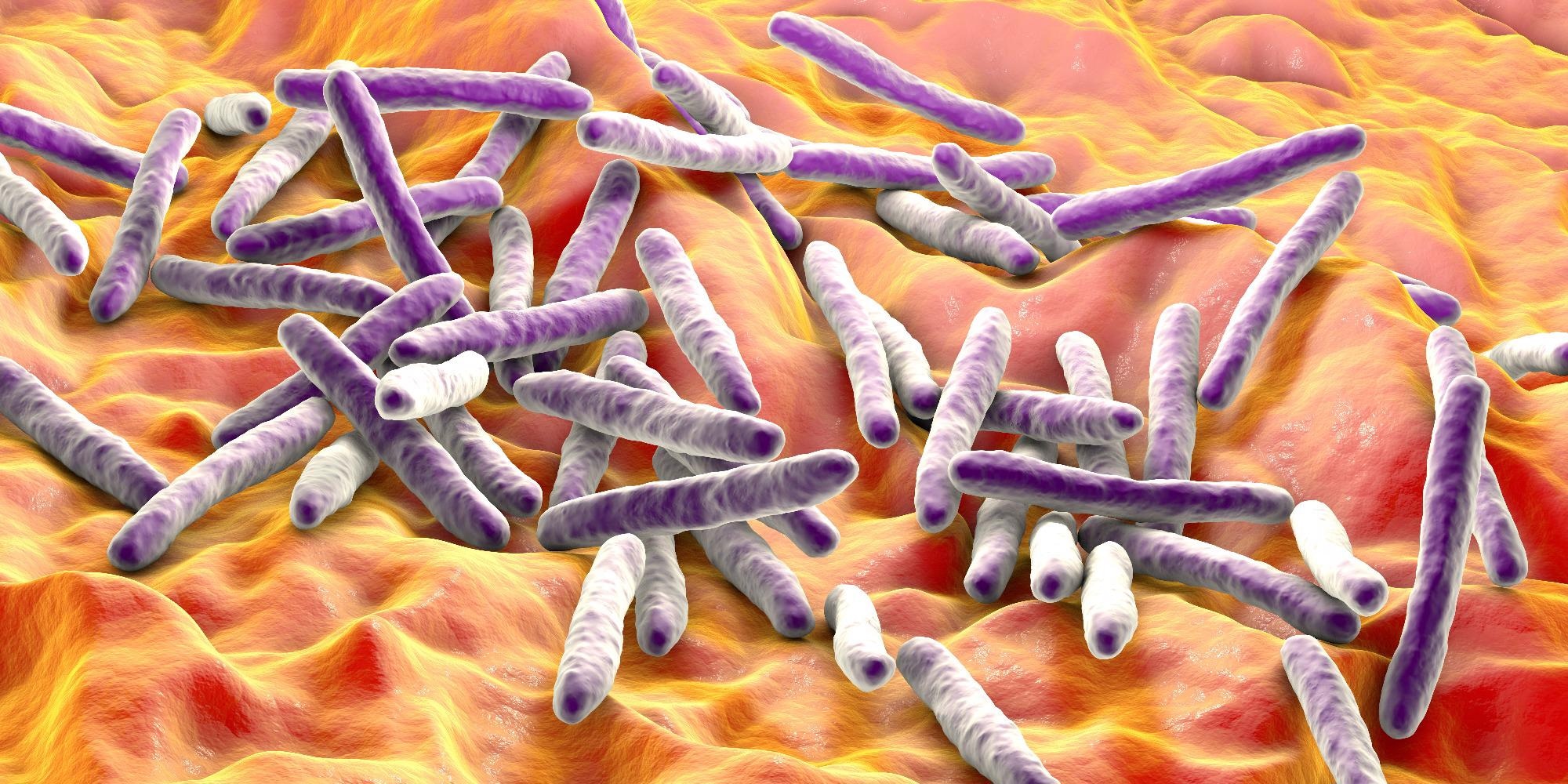 A recent study published in the journal PLOS Pathogens evaluated the impact of Mtb infection on secondary CoV2 infection.

To study if prior Mtb infection affects the response to CoV2 infection, K18-hACE2 (ACE2) and C57BL/6 (B6) mice were infected with Mtb, and post thirty days, were exposed to CoV2. 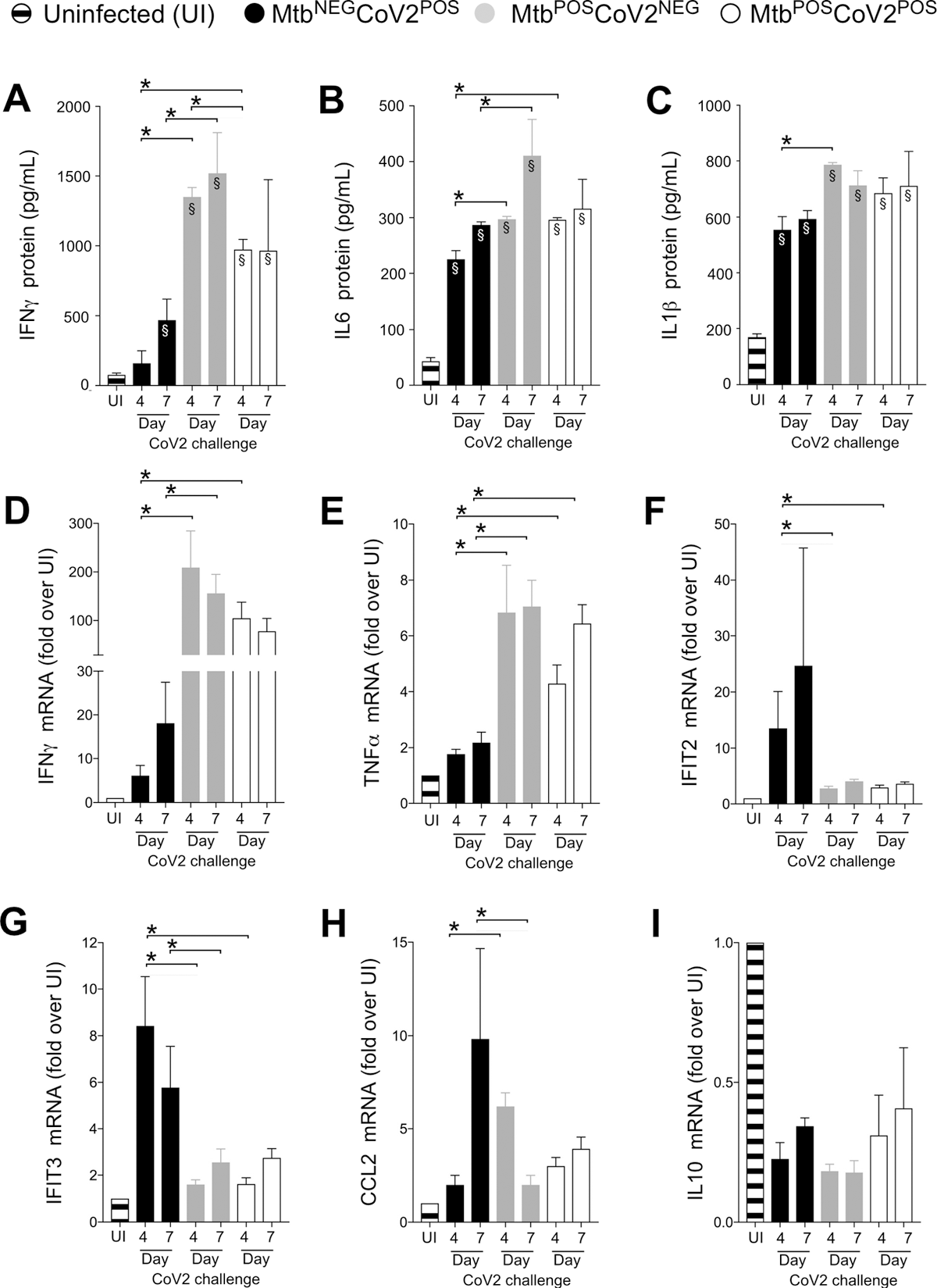 CoV2-elicted cytokine responses are muted in the presence of Mtb infection. On the indicated days, lung tissue from MtbNEGCoV2POS, MtbPOSCoV2NEG, MtbPOSCoV2POS and uninfected (UI) ACE2 mice was used to measure (A-C) protein levels of (A) IFNγ, (B) IL6 and (C) IL1β, as well as (D-I) mRNA levels of (D) IFNγ, (E) TNFα, (F) IFIT2, (G) IFIT3, (H) CCL2 and (I) IL10. This experiment was repeated twice, each with similar results (4 mice/group/timepoint). *, p ≤ 0.05 as determined by either Student’s t-test or ANOVA; §, significant relative to UI protein levels.

An assessment of CoV2 induced immune response post-Mtb infection was done. Multiple inflammatory genes were expressed in the lungs post-CoV2 infection. On days 4 and 7 post-challenge, the levels of interleukin (IL)1b, IL6, and interferon (IFN)a were elevated in the MtbNEG CoV2POS lungs compared to those in the uninfected controls; the levels were even higher for the MtbPOS CoV2NEG control.

Meanwhile, MtbPOS CoV2POS resistance could not be associated with higher levels of antiviral genes (IFIT2 and IFIT3), which were expressed in MtbNEG CoV2POS controls. Concurrent Mtb/CoV2 infection did not induce CCL2 expression.

The same experiments were performed with mouse-adapted CoV2 (MACoV2) infected B6 mice to assess whether CoV2 resistance was specifically seen with the  ACE2 transgenic model. The study groups were – MtbNEG MACoV2POS, MtbPOSMACoV2POS, and MtbPOS  MACoV2NEG.

Although the number varied between groups, it was seen that 50% of the UI lung comprised of an innate cluster—the rest being T-cells and B-cells. T-cell cluster, B-cell cluster, MPOS cluster, and DC cluster were higher in the MtbNEG MACoV2POS lungs.

Therefore, Mycobacterium tuberculosis-infected B6 mice were found to be resistant to CoV2 secondary infection. Mtb infection leads to an inflammation that makes the lungs resistant to CoV2 propagation and the resulting immunopathological responses; however, the entry of CoV2 in cells remains unaffected.

These effects may either occur due to the innate immune lineages present in the lungs after Mtb infection – which restrict CoV2; and/or the adaptive immune response elicited by Mtb that confers heterologous immunity by cross-reacting with the CoV2 antigens.

Hence, it was concluded that prior infection with Mycobacterium tuberculosis protects against secondary SARS-CoV-2 infection.

I am a medical content writer and editor. My interests lie in public health awareness and medical communication. I have worked as a clinical dentist and as a consultant research writer in an Indian medical publishing house. It is my constant endeavor is to update knowledge on newer treatment modalities relating to various medical fields. I have also aided in proofreading and publication of manuscripts in accredited medical journals. I like to sketch, read and listen to music in my leisure time.