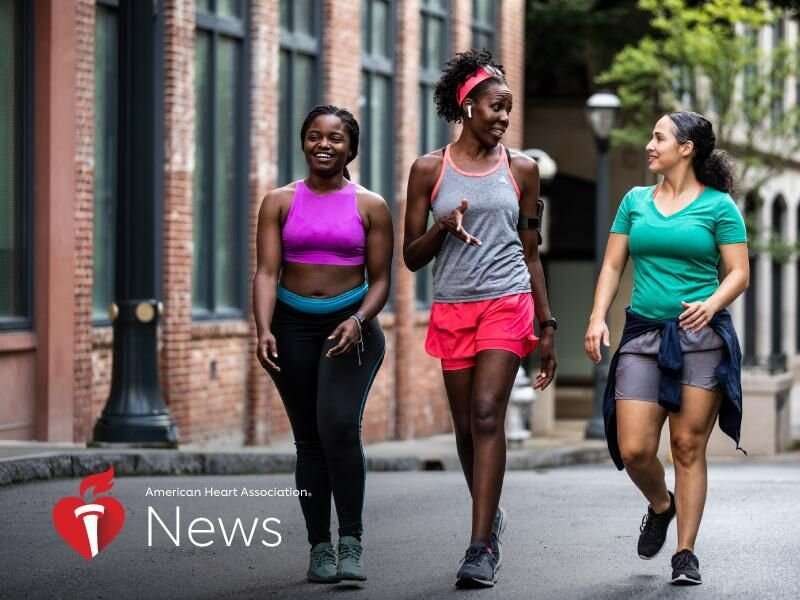 So you put on extra pounds during the pandemic. Your cholesterol’s too high. Maybe you need to do a better job managing blood pressure. It can feel like a lot to tackle.

But taking that first step toward better health can be as easy as … taking a first step. Literally. Just putting one foot in front of the other—as often as you can.

There’s a wealth of evidence showing walking improves heart and brain health and helps people live longer. And it can be done almost anywhere—even inside your home or a local shopping mall if the weather’s bad or there’s no safe place to walk in your neighborhood.

But how much walking does it take to make a difference?

“It stands for frequency, intensity and time,” he said.

Frequency and time: How often and for how long?

Federal physical activity guidelines call for 150 minutes or more of moderate intensity or 75 minutes of vigorous aerobic activity per week for adults, or a combination of the two. That can be done walking, said Lobelo, who also is an associate professor in Emory’s Rollins School of Public Health.

But you don’t need to do it all at once, and probably shouldn’t, he said. “If you don’t do much during the week, trying to walk 150 minutes on a Sunday is going to leave you achy the next morning. Ideally you should do this throughout the week.”

Walking five times a week for at least 30 minutes each time is fine, Franklin said, but so is walking for five, 10 or 15 minutes at a time as many times as it takes. “I tell patients they don’t have to put the dollar bill in the piggy bank all at one time.”

In fact, the more often you get up and move, the better. What’s bad are long periods of sedentary behavior, Lobelo said.

One study, published in The Lancet in 2011, found even 15 minutes of light exercise each day could reduce the risk of dying from any cause by 14% during an average eight years of follow-up. A study published last year in the American Heart Association journal Stroke found people with low levels of activity with eight or more hours of daily sedentary time had up to seven times higher risk of stroke than the more physically active people who reported less than four hours of sedentary time.

A popular way to measure progress is by counting steps. While the goal of 10,000 steps per day is widely promoted, a JAMA Network Open study published last year followed people for more than a decade on average and found those who took at least 7,000 steps each day were 50%-70% less likely to die than those who walked fewer.

Franklin said those steps could be taken in short spurts of exercise throughout the day. “The effects are cumulative,” he said. “It all adds up.”

Pace matters. Research published in 2018 in the British Journal of Sports Medicine found walking briskly reduced the overall risk of dying during the study by 24%. Another in the journal PLOS One found that taking too long to walk one mile, more than 24 minutes, increased deaths from cardiovascular diseases, dementia and other causes.

But that doesn’t mean you need to take off at a run to make a difference. Research shows you can reap the same benefits for lowering blood pressure, cholesterol and diabetes risk as long as you expend the same amount of energy walking vigorously.

“There’s good data to suggest the most protective walking speed is above 3 mph,” which corresponds to more than three times the energy spent at rest, Franklin said. “If you can get above that exercise intensity, the benefits are profound.”

The same benefits also can be gained by walking slower—just 2 mph—if you walk uphill, he said. Walking on a treadmill at this speed with a 3.5% incline works just as well. “It’s the same energy cost,” he said. “But build up slowly.”

Something is better than nothing

For people unaccustomed to regular physical activity, it’s important to start slowly and work your way up to hitting that 150-minute weekly goal, Franklin said.

And don’t feel bad if you’re not able to do as much as you’d like. Just keep moving—as much as you can, at whatever pace you can manage without lightheadedness or other symptoms of overdoing it, he said. “If you get pain or discomfort from the belly button on up and it comes on regularly, stop your exercise regimen and get checked out by a physician.”