Skip to content
HomeHealth NewsWhat part of the NHS do people most complain about?

‘Worst ever winter’ for NHS prompted record number of complaints as official figures also reveal the best and worst trusts for care across England (so how does yours rate?)

Thousands more patients penned written complaints to the NHS between January and March, reveal official figures that also break down the best and worst trusts for care across England.

This was at the brunt of the crisis, branded the health service’s ‘worst ever winter’ by Health and Social Care Secretary Jeremy Hunt.

NHS Digital figures released today showed 49,580 written complaints were made in quarter four – 4,000 more than in October to December.

Just 49,185 were recorded in quarter four the year before, when the winter struggles of the NHS were dubbed a ‘humanitarian crisis’.

The majority of the complaints between January and March, more than a third, were in regards to poor communication, staff behaviour and inadequate food and drink.

In terms of individual NHS organisations, some were almost 30 times more likely to have a complaint put in against them than others.

East of England Ambulance Service NHS Trust was the organisation with the most complaints – with 118 per 1,000 members of staff.

Alder Hey Children’s NHS Foundation Trust found itself at the other end of the scale. Just 4.1 complaints per 1,000 members of staff were made at the trust. 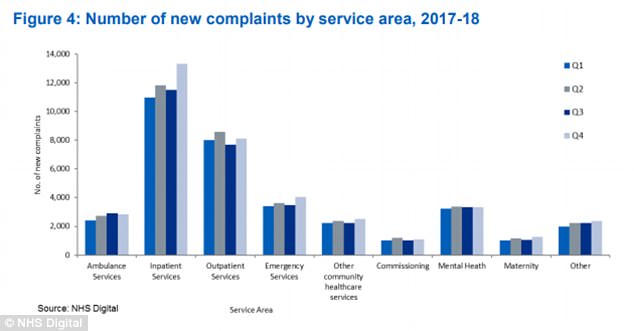 How many complaints were there in total?

However, this was the lowest amount of penned letters or emails received over the three years of data recorded by NHS Digital.

Around 70,000 of all the complaints made were in regards to poor communication, staff behaviour and inadequate food and drink.

Who received the brunt of complaints?

A further breakdown of the complaints made revealed surgeons was the specialist group that unleashed the most wrath of patients over 12 months.

More than 13,000 written letters were in relation to the ‘surgery group’, 6,900 about A&E units and 4,300 in relation to obstetricians and gynaecologists.

Waiting times in A&E have ballooned to their worst ever levels over the past winter, which could explain the complaints made about casualty units.

While hundreds of thousands of patients have been left waiting longer than 18 weeks for routine operations because of unprecedented pressure in the NHS.

Staff described patients ‘dying prematurely’ in corridors before they were seen as furious medics begged for extra funding to cope with the pressure.

Concerned medics have repeatedly warned the cash-strapped health service has ‘no more to give’ and is in the grip of an eternal winter.

In a report of the data, NHS Digital said: ‘These measures are only intended to show basic contextual comparisons and should be treated with caution.’

More than 13,300 letters were penned in quarter four relating to inpatient services – when patients are admitted to hospital overnight.

Outpatient services – when a patient attends hospital and leaves in the same day – were the next worst offender, with 8,113 written complaints.