Woman, 46, with severe allergy to penicillin goes into anaphylactic shock after having unprotected sex with her husband who was taking the antibiotic

A woman suffered a life-threatening allergic reaction to penicillin after having unprotected sex with her husband.

The 46-year-old, from Baltimore, Maryland, broke out in blotchy red patches, began sweating profusely and became dizzy within an hour of intercourse.

She was taken to A&E when her symptoms worsened and she started suffering diarrhoea and extreme itchiness. 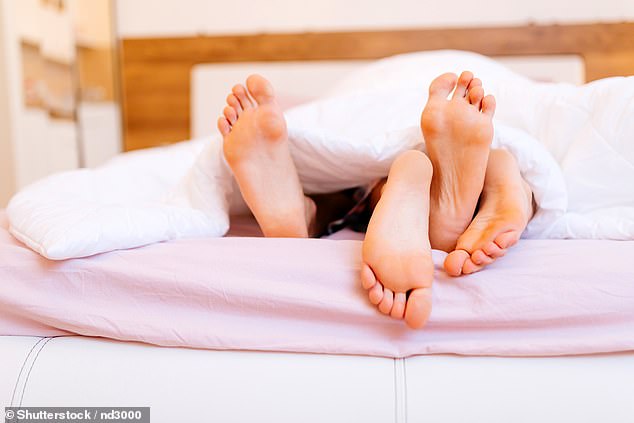 The unidentified woman revealed she had an allergy to penicillin but denied having taken the drug, or any unusual foods, before having sex.

Doctors from the Sinai Hospital of Baltimore presumed she was suffering from sepsis because her blood pressure had plunged to life-threateningly low levels.

She was hooked up to an IV and given vital fluids to help her heart continue to pump blood around her body.

The patient was also given a course of antibiotics to fight the sepsis, caused by what they presumed was a severe infection.

HOW CAN YOU SUFFER AN ALLERGIC REACTION TO SEMEN?

Allergies to a protein in semen have been recorded in medical literature, causing typical symptoms to occur during or after sexual intercourse.

But allergic reactions can also be induced ‘by the transfer of allergens (drugs or food) present at low concentrations’ in semen.

The unidentified woman revealed she had an allergy to penicillin but denied having taken the drug, or any unusual foods, before having sex.

Medics then discovered her husband had taken nafcillin – a form of penicillin – to treat a heart infection.

As a result, the doctors said her anaphylaxis was caused by ‘seminal transfer of nafcillin’.

The case, believed to be the third of its kind ever recorded, was published in The American Journal of Medicine.

But subsequent tests revealed there was no infection and she had actually been in anaphylactic shock – a deadly overreaction by the immune system to a substance it wrongly thinks is harmful.

Medics then discovered her husband had taken nafcillin – a form of penicillin – to treat a heart infection.

As a result, the doctors said her anaphylaxis was caused by ‘seminal transfer of nafcillin’.

The case, believed to be the third of its kind ever recorded, was published in The American Journal of Medicine.

It is presumed she was given an auto-injector, which shoots adrenaline into patients.

Adrenaline relaxes the muscles around the airways in the lungs, helping the airways to open up and pulls blood pressure up to normal levels.

The woman’s symptoms improved within 24 hours and she was able to leave hospital.

Doctors prescribed her with an Epipen in case she suffered a reaction in future. She was told not to have sex with her husband for at least a week after he finished his course of antibiotics.

Medics in the journal said penicillins, as well as other antibiotics, are known to concentrate in human semen and can be absorbed by the vagina.

They have now urged doctors and pharmacists to be aware of the potential risks of prescribing drugs to people if their partners have allergies.

Writing in the journal, the authors said: ‘Though anaphylactic reactions secondary to seminal transfer of allergens are exceedingly rare, the prescribing provider must take into account the hazards of allergic reactions and adverse side effects, not only for the patient but also for the patient’s family.’

In March, a 31-year-old Spanish woman went into anaphylactic shock  after performing oral sex on her partner.

The unidentified woman swallowed her lover’s semen and afterwards began to vomit, struggle to breathe and break out in hives.

The patient, from Alicante, suffered an allergic reaction to amoxicillin, another penicillin-based antibiotic.

Her boyfriend had been taking the drug to treat an ear infection.

WHAT IS AN ANAPHYLACTIC SHOCK?

Anaphylaxis, also known as anaphylactic shock, can kill within minutes.

It is a severe and potentially life-threatening reaction to a trigger, such as an allergy.

The reaction can often be triggered by certain foods, including peanuts and shellfish.

However, some medicines, bee stings, and even latex used in condoms can also cause the life-threatening reaction.

According to the NHS, it occurs when the immune system overreacts to a trigger.

It is considered a medical emergency and requires immediate treatment.

Insect stings are not dangerous for most victims but a person does not necessarily have to have a pre-existing condition to be in danger.

An incremental build-up of stings can cause a person to develop an allergy, with a subsequent sting triggering the anaphylactic reaction.