The newest antiviral drugs could take advantage of a compound made not by humans, but inside them. A team of researchers has identified the mode of action of viperin, a naturally occurring enzyme in humans and other mammals that is known to have antiviral effects on a wide variety of viruses, including West Nile, hepatitis C, rabies, and HIV.

The enzyme facilitates a reaction that produces the molecule ddhCTP, which prevents viruses from copying their genetic material and thus from multiplying. This discovery could allow researchers to develop a drug that induces the human body to produce this molecule and could act as a broad-spectrum therapy for a range of viruses. A paper describing the study appears online on June 20th in the journal Nature.

“We knew viperin had broad antiviral effects through some sort of enzymatic activity, but other antivirals use a different method to stop viruses,” said Craig Cameron, professor and holder of the Eberly Chair in Biochemistry and Molecular Biology at Penn State and an author of the study. “Our collaborators at the Albert Einstein College of Medicine, led by senior authors Tyler Grove and Steven Almo, revealed that viperin catalyzes an important reaction that results in the creation of a molecule called ddhCTP. Our team at Penn State then showed the effects of ddhCTP on a virus’s ability to replicate its genetic material. Surprisingly, the molecule acts in a similar manner to drugs that were developed to treat viruses like HIV and hepatitis C. With a better understanding of how viperin prevents viruses from replicating, we hope to be able to design better antivirals.”

A virus typically co-opts the host’s genetic building blocks to copy its own genetic material, incorporating molecules called nucleotides into new strands of RNA. The molecule ddhCTP mimics these nucleotide building blocks and becomes incorporated into the virus’s genome. Once incorporated into a new strand of the virus’s RNA, these “nucleotide analogs” prevent an enzyme called RNA polymerase from adding more nucleotides to the strand, thus preventing the virus from making new copies of its genetic material. 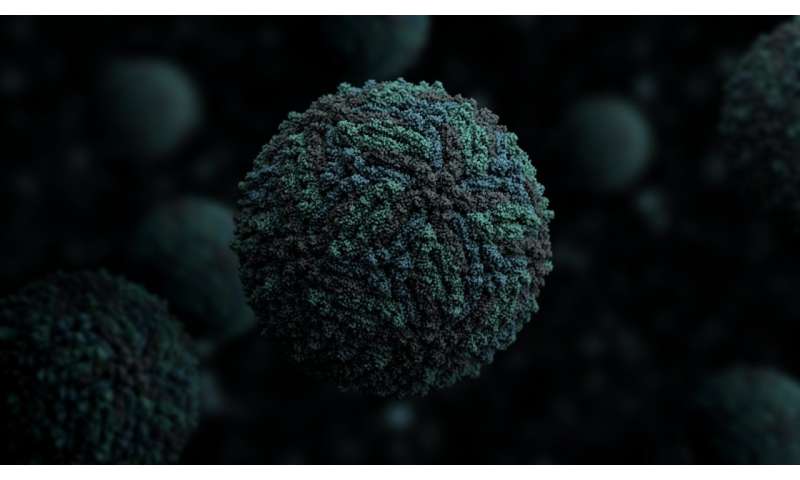 “Long ago, the paradigm was that in order to kill a virus, you had to kill the infected cell,” said Cameron. “Such a paradigm is of no use when the virus infects an essential cell type with limited capacity for replenishment. The development of nucleotide analogs that function without actually killing the infected cell changed everything.”

Most nucleotide analogs on the market are manmade, but there are often complications with using these synthetic drugs. Because nucleotides are used by many proteins and enzymes of the cell, numerous opportunities exist for analogs to interfere with normal cellular function.

“The major obstacle to developing therapeutically useful antiviral nucleotides is unintended targets,” said Jamie Arnold, associate research professor of biochemistry and molecular biology at Penn State and an author of the paper. “For example, a few years ago we discovered that a nucleotide analog under development for treatment of hepatitis C could interfere with the production of RNA in mitochondria, subcellular organelles important for energy production in the patient’s own cells. That meant people with mitochondrial dysfunction are predisposed to any negative effects of this unintended interference.”

The molecule ddhCTP, however, does not appear to have any unintended targets. The research team suspects that the natural origin of the compound within the human body necessitates that it be nontoxic.

“Unlike many of our current drugs, ddhCTP is encoded by the cells of humans and other mammals,” said Cameron. “We have been synthesizing nucleotide analogs for years, but here we see that nature beat us to the punch and created a nucleotide analog that can deal with a virus in living cells and does not exhibit any toxicity to date. If there’s something out there that’s going to work, nature has probably thought of it first. We just have to find it.”

To verify the effectiveness of ddhCTP, the research team showed that the molecule inhibited the RNA polymerases of dengue virus, West Nile virus and Zika virus, which are all in a group of viruses called flaviviruses. Then they investigated whether the molecule halted replication of Zika virus in living cells.

“The molecule directly inhibited replication of three different strains of Zika virus,” said Joyce Jose, assistant professor of biochemistry and molecular biology at Penn State and an author of the paper. “It was equally effective against the original strain from 1947 as it was against two strains from the recent 2016 outbreak. This is particularly exciting because there are no known treatments for Zika. This study highlights a new avenue of research into natural compounds like ddhCTP that could be used in future treatments.”

Together, these results demonstrate promising antiviral effects of ddhCTP on a variety of flaviviruses. However, the RNA polymerases of human rhinovirus and poliovirus, which are in a group called picornaviruses, were not sensitive to the molecule. The researchers plan to investigate the polymerase structures of these viruses to better understand why flaviviruses are sensitive to ddhCTP while the picornaviruses tested in this study are not. This investigation may also offer insights into how flaviviruses might develop resistance to the molecule.