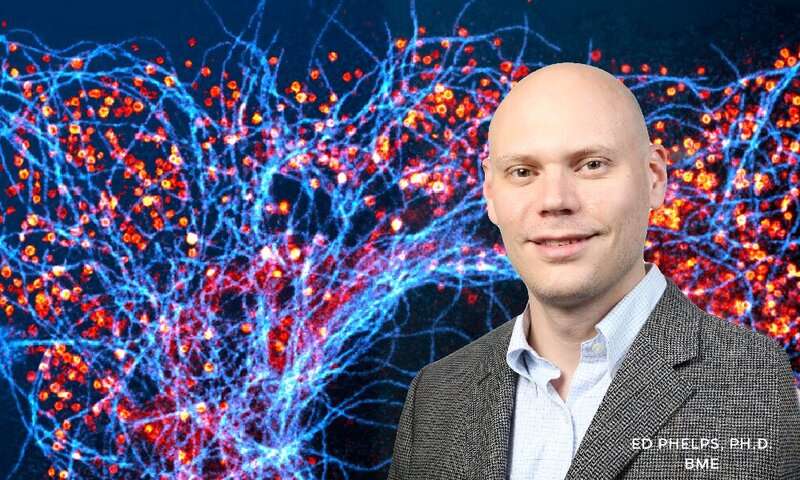 When insulin is secreted from beta cells in the pancreas to control glucose levels in the blood stream, GABA is also released from the cells to calm them so that the cells can prepare for the next pulse of insulin secretion. Having a stable insulin level is key to the functioning of a healthy pancreas. Impairment to beta cell GABA biosynthesis or release of GABA from the cell could leave islet tissue vulnerable to dysfunction or inflammation associated with type 1 and type 2 diabetes.

Edward Phelps, Ph.D., an assistant professor in the J. Crayton Pruitt Family Department of Biomedical Engineering at UF, Walker Hagan, Ph.D. student in the Phelps Lab, and an interdisciplinary research team have developed a method to measure where and how gamma amino-butyric acid (GABA) is released from beta cells in the pancreas. Dr. Phelps and his colleagues have published a paper on their findings in Nature Metabolism, 2019 Nov 15, 11(1).

GABA appears in beta cells from the pancreas at nearly the same concentrations as in nerve cells of the brain. For the last 30 years, scientists thought that GABA was released from the beta cells in the same manner as in the nerve cells. In the brain, GABA is stored in small sacs (vesicles) at the end of the nerve cell. When a nerve impulse stimulates the vesicles in the axon of the cell to transmit the impulse to the next nerve cell, GABA is also secreted from the vesicles. GABA acts to calm the nerve so that it is ready for the next impulse. However, scientists were unable to locate a vesicular GABA transporter in 99% of beta cells, thus limiting the traditional explanation for GABA release from beta cells in the pancreas.

During his early research in this field, Dr. Phelps observed that GABA is not packed into vesicles within pancreatic beta cells; rather, it is spread evenly throughout the beta cell. Finding that GABA was not secreted from vesicles in the beta cell, Dr. Phelps and his colleagues sought another pathway for the release of GABA from the beta cell.

“There is a channel between the interior of the beta cell and the extracellular space, which we thought was worth investigating,” Phelps said. “The volume regulatory anion channel (VRAC) is known for another purpose. It is used to help cells maintain their shape by keeping the osmotic pressure inside and outside the cell in equilibrium. When this balance is disturbed and the cell shape changes, small organic chemicals known as osmolytes are expelled from the cell via the VRAC channel to help the cell regain its shape. When we artificially opened this channel in beta cells using low saline, we found that this channel also transports GABA.”

The researchers used a combination of high performance liquid chromatography (HPLC) and GABA biosensor cell assays to measure the dynamics of GABA release from human islets. In a series of experiments using hypotonic saline to open the VRAC channel, a biosensor was placed downstream from pancreatic islets containing beta cells. The biosensor fluoresced when GABA was released and was viewed via confocal microscopy. 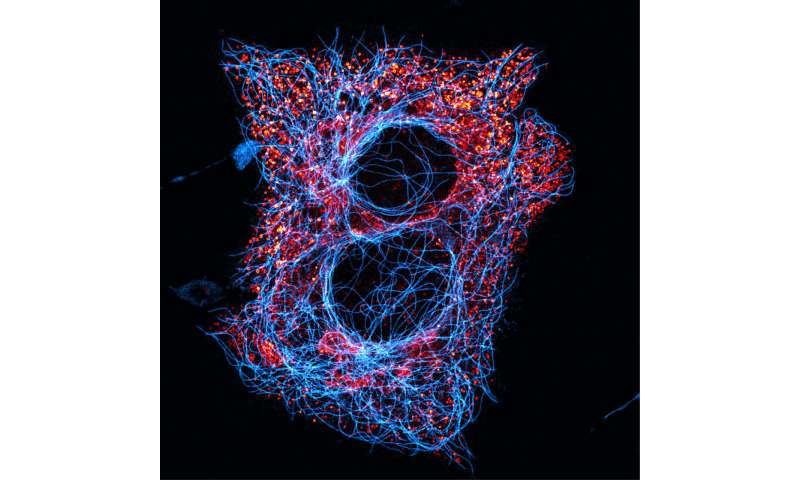 From their research, Dr. Phelps and his colleagues were able to show that, in the human pancreatic islet (beta cell):

(1) GABA is released independently of glucose concentration and in pulses that occur with a frequency in the same range as those of pulsatile in vivo insulin secretion;

(3) GABA production and release can regulate the intervals of insulin secretion.

These findings represent a previously undescribed mode of autocrine signaling in the islet that may also extend to many other cell types and tissues known to utilize GABA signaling. “As other researchers build on what we have done and show reproducible results, we will open up totally new areas of biomedical research that scientists can investigate, including possible new treatments for diabetes and potential defense against autoimmune activity,” Phelps concluded.

“Publication of these results in one of the most prestigious journals in the field, Nature Metabolism, is a major accomplishment that illustrates the importance and peer respect for the research that is being conducted by Dr. Phelps and his colleagues. Through interdisciplinary collaborations such as this, faculty in University of Florida Biomedical Engineering are pushing the boundaries of scientific and technological advances underpinning medical innovations that impact us all,” commented Christine Schmidt, Ph.D., professor, J. Crayton Pruitt family Chair and Department Chair of Biomedical Engineering.