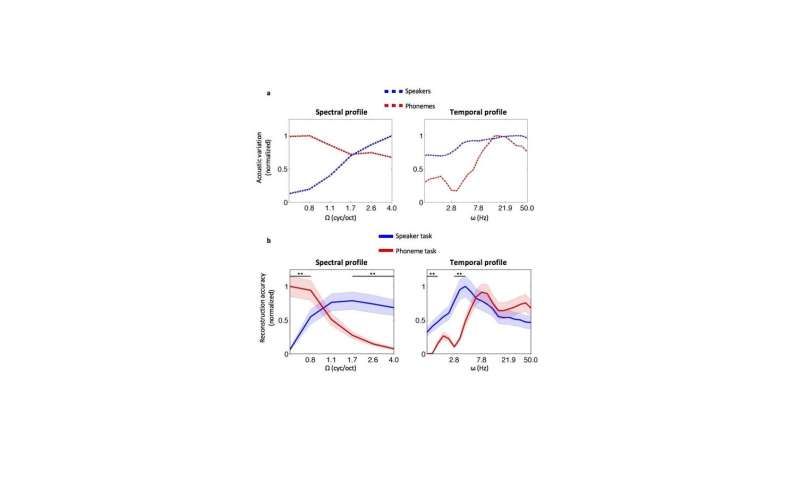 Is the brain capable of distinguishing a voice from the specific sounds it utters? In an attempt to answer this question, researchers from the University of Geneva (UNIGE), Switzerland, – in collaboration with the University of Maastricht, the Netherlands—devised pseudo-words (words without meaning) spoken by three voices with different pitches. Their aim? To observe how the brain processes this information when it focuses either on the voice or on speech sounds (i.e. phonemes). The scientists discovered that the auditory cortex amplifies different aspects of the sounds, depending on what task is being performed. Voice-specific information is prioritised for voice differentiation, while phoneme-specific information is important for the differentiation of speech sounds. The results, which are published in the journal Nature Human Behaviour, shed light on the cerebral mechanisms involved in speech processing.

Speech has two distinguishing characteristics: the voice of the speaker and the linguistic content itself, including speech sounds. Does the brain process these two types of information in the same way? “We created 120 pseudo-words that comply with the phonology of the French language but that make no sense, to make sure that semantic processing would not interfere with the pure perception of the phonemes,” explains Narly Golestani, professor in the Psychology Section at UNIGE’s Faculty of Psychology and Educational Sciences (FPSE). These pseudo-words all contained phonemes such as /p/, /t/ or /k/, as in /preperibion/, /gabratade/ and /ecalimacre/.

How the brain distinguishes different aspects of speech

The scientists scanned their participants using functional magnetic resonance imaging (fMRI) at high magnetic field (7 Tesla). This method allows to observe brain activity by measuring the blood oxygenation in the brain: the more oxygen is needed, the more that particular area of the brain is used. While being scanned, the participants listened to the pseudo-words: in one session they had to identify the phonemes /p/,/t/ or /k/, and in another they had to say whether the pseudo-words had been read by voice one, two or three.

The researchers subsequently used computational modeling to analyse the fMRI responses, namely the brain activation in the auditory cortex when processing the sounds during the two tasks. When the participants had to focus on the voices, the auditory cortex amplified the higher spectral modulations. For the phonemes, the cortex responded more to the fast temporal modulations and to the low spectral modulations. “The results show large similarities between the task information in the sounds themselves and the neural, fMRI data,” says Golestani.

Tags:and, between, brain, distinguishes, how, sound, the, voice
Related Posts