Imagine that you’re supposed to meet colleagues for dinner, only you can’t remember what their faces look like. For some, this is a reality, as people with face blindness or developmental prosopagnosia (DP) have severe difficulties recognizing faces, including those of family and friends, despite having no history of brain damage (e.g., brain trauma, head injuries). A Dartmouth study finds that developmental prosopagnosia often occurs as a result of a neurobiological problem in the brain, which affects visual recognition broadly. The findings are published in the Proceedings of the National Academy of Sciences .

“Our results indicate that neural abnormalities in many people with DP are more widespread than previous studies have suggested,” says senior author Bradley Duchaine , a professor of psychological and brain sciences and the principal investigator of the Social Perception Lab at Dartmouth College. Duchaine worked closely with Guo Jiahui, a Dartmouth psychological and brain sciences graduate student and member of his lab, who served as first author of the study.

For the research, the Dartmouth team used functional MRI to measure the brain responses to video clips showing faces, objects, scrambled objects, scenes, and bodies. They then compared these responses in 22 people with developmental prosopagnosia and 25 control participants to determine which regions in the facial processing system may be abnormal and whether any regions that respond preferentially to scenes, bodies, or objects respond abnormally in the developmental prosopagnosics.

This is the first study of DP to use videos of moving faces and is more in line with how one experiences the world, rather than relying on static images of faces. It is also the first fMRI study of its kind to investigate activity in scene and body areas. 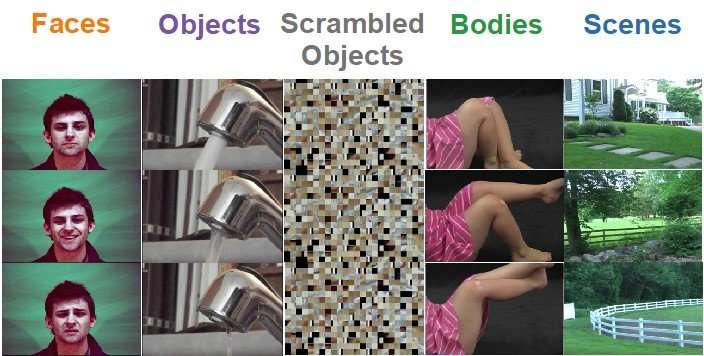 The study also looked at how DPs responded to visual categories, such as scene areas, body areas and object areas. Known as category-selective areas, the researchers assessed how strongly tuned a cortical area is to a particular category; if the cortex doesn’t develop properly, behavioral deficits ensue. In comparison to the controls, the DPs had pronounced reductions in their responses to scenes and marginal reductions in their responses to bodies. Yet, DPs’ responses to objects in object areas were normal and the same as that of the controls.

“The study participants with developmental prosopagnosia had reduced responses to not only face areas but also to scene areas and body areas. Our findings suggest that most cases of developmental prosopagnosia are not caused by a lack of experience with faces during development but instead, by a broader neurobiological cause that affects all three types of areas,” explained Duchaine. “Our results indicate that the deficits across face areas, scene areas and body areas may be due to a broad region of cortex that did not develop properly. In other words, these areas did not get wired properly during development,” he added.

Past research on visual recognition disorders has focused almost entirely on prosopagnosia; however, the results indicate that many DPs have deficits that extend beyond face areas and it seems likely that abnormalities in scene and body areas will cause difficulties with scene and body perception. Duchaine plans to conduct further research to gain insight into these other visual recognition deficits in order to better understand the types of disorders that impact the visual system.