According to a report by the World Health Organization, close to 1 in 10 people in the world are affected by anxiety and/or depression. Alarmingly, the amount has nearly doubled, from 416 million to 615 million, between 1990 and 2013. Since adequate treatments are still lacking for many patients, the scientists at the Max Planck Institute of Psychiatry hope their research will inform the development of new, more effective treatments.

In a previous study, published in Science in 2011, Jan Deussing’s group revealed for the first time that corticotropin releasing hormone (CRH) signaling in dopaminergic neurons of the ventral tegmental area (VTA) can suppress anxiety.

In their latest study, Deussing’s group has expanded on these findings, providing more mechanistic insights into the “anxiolytic” CRH circuit. Published in the prestigious journal Nature Neuroscience, the scientists describe how the circuit originates in the extended amygdala, in a population of GABAergic neurons that produce CRH. They traced these neurons and saw that they project down to a region of the midbrain called the VTA, one of the main dopamine-producing areas of the brain. The VTA is known to play a key role in reward and addiction, but here the authors explain how CRH and dopamine interact in anxiety-related behavior.

The CRH-containing projection neurons of the extended amygdala target CRH receptors on dopaminergic VTA neurons. As a result, this circuit can regulate dopaminergic transmission and in turn, emotional behavior. 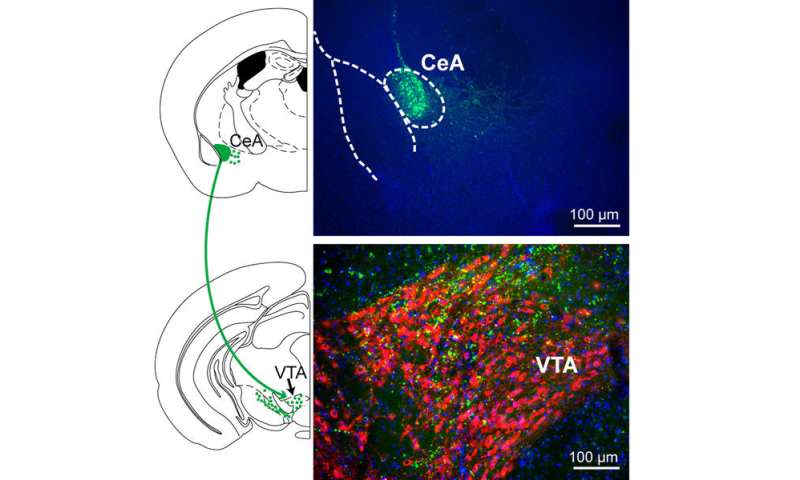 Lead author of the current study Nina Dedic explains the significance of the findings: “We know that CRH is a major driver of the stress response and that a hyperactive CRH system is implicated in neuropsychiatric pathologies such as mood and anxiety disorders. However, in this study, we could show that CRH does not always act as an aversive, stress-inducing neuropeptide. In fact, specific CRH circuits are required to maintain a positive affective state under normal, stress-free conditions.”

Deussing, research group leader and head of the study, explains: “We were surprised to find that a subset of GABAergic CRH neurons in the extended amygdala carry dendritic spines and co-express the postsynaptic density protein, Camk2a. These characteristics are more commonly seen in excitatory, glutamatergic neurons.” He continues: “Our work suggests that CRH neurons in the extended amygdala are more diverse than we had originally thought. There are locally projecting interneurons as well as spiny, GABAergic, long-range projection neurons.”