When you are lost or disoriented, your brain uses cues from your surroundings—landmarks both near and far—to sort out where you are. The information gathered by your senses is transmitted by nerve cells, or neurons, to specific brain regions where the signal is routed through circuits and sent downstream to areas that essentially translate the information into behavior and get you back on track.

At the Janelia Research Campus, postdoctoral research scientist Mark Cembrowski, who is part of Group Leader Nelson Spruston’s lab, has been leading an effort to parse the cellular, molecular, and behavioral components of this process, called spatial recognition. Their discoveries, described April 19 in the journal Cell, offer new insight into the neuroscience of memory-guided navigation.

Cembrowski’s primary research target is the subiculum, a sub-region of the mammalian brain located in the hippocampus, which plays an important role in memory and navigation. The subiculum is the primary “output” for the hippocampus—it sends signals to various brain regions via a special class of neurons called pyramidal cells.

“If you went back a few years and opened a textbook you’d see the classic hippocampal circuit that’s been diagrammed for a hundred years, and you’d look at the subiculum and you’d see it labeled as one region, with one type of cell, doing one thing,” Cembrowski explains. But, scientists are figuring out that things are not as simple as they seem.

Recently, researchers demonstrated that pyramidal cells may exhibit heterogeneity within the subiculum; in other words, subclasses of these cells may relay different signals to different areas of the brain. 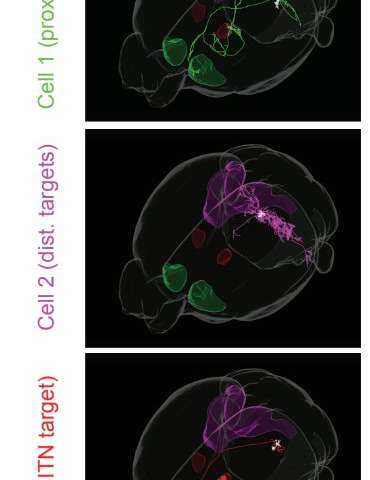 “It’s been postulated that the brain could have separate pathways for local and global [information processing], and we wanted to rigorously examine that hypothesis,” says Cembrowski.

The brain uses two kinds of cues for navigation—local (based on the immediate environment) and global cues (based on distant objects or unique identifiers of a space). Cembrowski and his colleagues wanted to understand the extent of the variation of pyramidal cells in subiculum and, if they could identify distinct subclasses, associate them with differences in information processing.

The launching point for this research was an experiment performed by Cembrowski’s former lab partner, Austin Graves. That work showed that pyramidal cells exhibit two distinct firing patterns in the subiculum—some spiked once, while others spiked in bursts.

“That was our hook,” Cembrowski recalls. “Spikes are the language of the nervous system and we wanted to know if the different ‘dialects’ conformed to different subclasses of neurons and if we could characterize those subclasses.”

The characteristics in which Cembrowski and his collaborators were interested included connectivity (downstream brain targets), gene expression, and electrophysiology (the science behind the spikes).

They investigated pyramidal cells in the dorsal region of the subiculum—an area linked to the processing of information about the animal’s environment—using a multi-pronged approach, integrating methods from cell biology, genetics, circuit analysis, and behavioral neuroscience to zero in on the neural roots of spatial recognition.

“We could have studied this concept from any one of those particular perspectives,” says Cembrowksi. “But the power of being at Janelia is you don’t need to compromise—you can do them all at once.” Cembrowski worked with three of Janelia’s support teams—Quantitative Genomics, Anatomy and Histology, and the Vivarium support team—as well as the MouseLight project team.

Their first step? To trace the paths of the pyramidal cells and see if subclasses of cells could be distinguished based on their downstream targets. Cembrowski used special retrograde beads that travel from the end of a neuron back to its point of origin. He injected two colors of beads—magenta and green—into two different target brain regions. He followed the paths the beads traveled back to the subiculum and found that the magenta and green beads landed in two distinct spatial niches in the dorsal subiculum; thus, highlighting differences in connectivity.

Once the cells were color-coded, Cembrowski could work with the Quantitative Genomics team to get sequencing data and he found that the green and magenta cells’ gene expression was strikingly different.

So, the inevitable next question was, are the connectivity and gene expression differences of the cells associated with their roles in processing local and global cues?

To get at the answer, Cembrowski set up a behavioral experiment involving a mouse navigating a controlled environment. The mouse swims in a small pool containing opaque water and a submerged platform. The animal learns that markers placed at a distance outside of the pool can be used to estimate its position relative to the platform. With each trial, the mouse navigates to the platform more quickly.

Then, working with the Janelia Vivarium team, Cembrowski temporarily silenced one type of pyramidal cell in the mouse’s subiculum. With only green pyramidal cells functioning, trained mice that previously bee-lined to the platform now swam helter-skelter. This suggested that the magenta cells, which had been silenced, were crucial to gathering and retaining information about global cues, and the green cells processed information only from local cues.

Finally, Cembrowski and his colleagues pieced together that the green cells are the single-spikers and the magenta cells fire in bursts. “We have a lot of guided hypotheses about what causes these differences in electrophysiology and how those differences are related to information processing,” Cembrowski says.

This research is transforming our understanding of brain structures at the center of memory, behavior, and cognition.

“That’s the craziest thing about our research,” he says. “We’re finding out that this brain region—the subiculum—varies in every spatial scale on which the nervous system operates—from molecules to cells to circuits. But this is just the opening of the rabbit hole,” says Cembrowski.

Cembrowski shared some clues as to what’s ahead for him and his colleagues: “We have identified suspect number one in terms of what’s responsible for the electrophysiological differences between subiculum pyramidal cells and we hope to investigate that, perhaps using gene editing.”

Cembrowski also wants to extend this work across the full extent of the subiculum to see if they can identify additional cell types. In addition, they hope to take the spatial recognition experiments to the next level using a new microscopy technology that could show simultaneous activity in both subclasses of pyramidal cells in a freely moving mouse.