Synapses, the structures that allow neurons to pass signals to one another, are essential to neuronal function. Proper formation and responses to stimulation of synapses both during development and in adulthood are fundamental to mammalian brains, but the molecular processes governing formation and modulation of compartmentalized synaptic assemblies are unclear.

The findings were published in the journal Cell on Aug 2, 2018.

Synapses, the most basic units for a neural circuit to form, do not behave in a static and linear way, as connection nodes in computer circuits do. As they are extremely dynamic both within each synapse at a short time scale and at the entire circuit level at a very long time range, understanding synapse formation and its dynamic regulation is essential to investigate how a specific neural circuit generates certain physiological functions.

“The condensed phase PSD assemblies have features that are distinct from those in homogeneous solutions and fit for synaptic functions,” said Professor Mingjie Zhang, lead researcher of the group. “In our study, we have built a molecular platform for understanding how neuronal synapses are formed and dynamically regulated.” 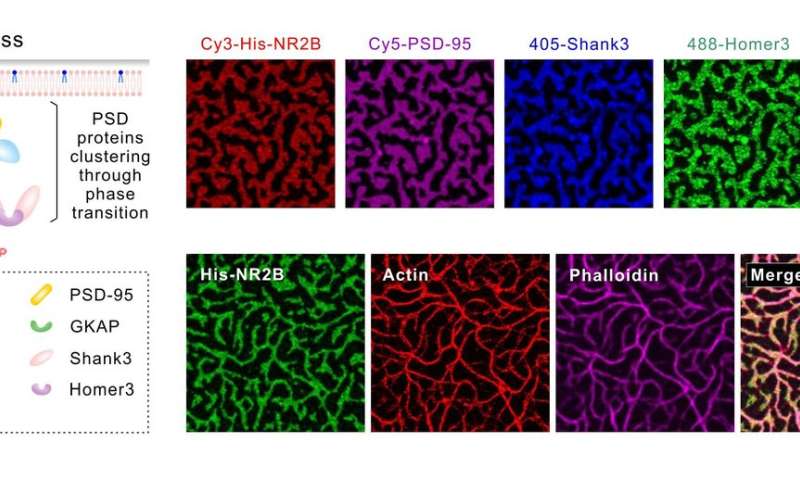 “We attempted to understand how highly condensed PSD protein assemblies not enclosed by membranes can autonomously form and stably exist,” said Dr. Menglong Zeng, a co-author of the paper. “Such assembled PSD condensates dynamically exchange their constitutes in response to synaptic stimuli.”

“In this study, via a biochemical reconstitution approach using purified proteins, we have demonstrated these four major scaffold proteins can, indeed, form PSD protein condensates at physiological concentrations,” said Professor Zhang. “Our results indicate that the highly condensed PSD assemblies in living neurons might autonomously form and stably exist via LLPS. It provides a likely answer to the mechanism of synapse-based cellular compartmentalization of neurons, a striking morphology that is critical for the functions of neurons.”

The reconstituted PSD condensates investigated in the study recapture several key functional features of the PSD in living neurons.