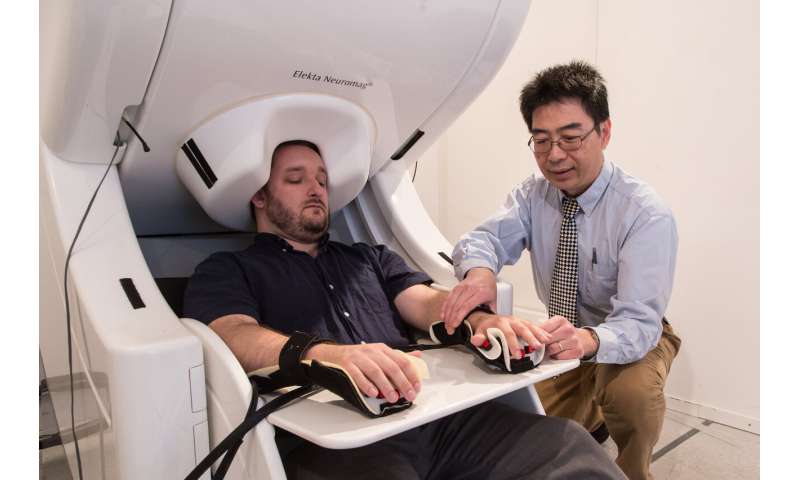 A new study funded by the Department of Veterans Affairs (VA) and the Navy finds that veterans and service members with a history of combat-related mild traumatic brain injury—compared with those in a control group—have much higher levels of abnormally fast brain waves in a region that plays a key role in consciousness.

The findings appeared in the journal Cerebral Cortex in May 2019.

Using a neuroimaging process called MEG, the researchers concluded that the fast, or high-frequency, gamma waves were “markedly elevated” in two of the four lobes of the cerebral cortex: the pre-frontal and posterior parietal lobes. Those two lobes affect reasoning, organization, planning, execution, attention, and problem-solving.

Dr. Mingxiong Huang, a physicist at the VA San Diego Healthcare System, led the study. He’s done a series of papers on brain activity in relation to mild TBI and PTSD and is one of VA’s leading investigators using MEG. The neuroimaging tool can detect abnormal waves in specific areas of the brain.

“The widespread nature and magnitude of the elevated gamma activity in the mild TBI participants was beyond our original expectations,” he says. “We expected more subtle elevation. The marked elevation suggests there is widespread and pronounced injury in neurons of the central nervous system that play a key role in brain circuitry and activity. This finding offers a new and exciting tool for directly assessing the dysfunctional neurons in people with mild TBI and may explain many of their clinical symptoms and cognitive deficits.”

Brain waves are produced by masses of neurons that communicate with each other. Gamma waves are the fastest of brain waves and relate to the simultaneous processing of information from different brain areas. Gamma waves measure between 30 and 80 hertz, with approximately 40 hertz being typical in humans. Hertz, or Hz, is the metric unit of frequency and equals one cycle per second.

Beta waves dominate one’s waking state of consciousness, when attention is directed toward cognitive tasks. Alpha waves are present during quietly flowing thoughts. Theta waves occur most often in sleep when one is dreaming. Finally, delta waves are slow brain waves that are generated in deep meditation and dreamless sleep.

Huang was also surprised that brain wave activity was lower in the participants with mild TBI in the ventromedial prefrontal cortex, which is central to the pathology of mood and anxiety disorders. That region is also critical for controlling activity in the amygdala, which processes such emotions as fear, anxiety, and aggression.

“We expected to instead see hyperactivity in the ventromedial prefrontal cortex of those with mild TBI,” says Huang, who is also a professor in the department of radiology at the University of California San Diego (UCSD). “This indicates that injury to neurons that transmit impulses between other neurons can also lead to decreases in spontaneous activity in brain waves. This suggests that there were severe injuries to the ventromedial prefrontal cortex.”

This is the first study, Huang says, to show that mild combat-related head injuries are likely to result in abnormally high levels of gamma waves in people with chronic mild TBI. The reduced brain activity in the ventromedial prefrontal cortex is also a new finding, he says.

Traumatic brain injury is the signature injury from the post-9-11 conflicts in Iraq and Afghanistan. The Department of Defense and the Defense and Veterans Brain Injury Center estimate that 22% of combat casualties from Iraq and Afghanistan involve TBIs, most of which are mild in severity. Mild TBIs are also called concussions.

In recent years, Huang and other MEG researchers have learned that the brains of people with mild TBI generate abnormal slow waves. His latest study expands the knowledge of abnormality to fast gamma waves in people with mild TBI. MEG imaging is a promising marker for detecting specific regions of the brain that are impaired by a mild TBI, with an 85% accuracy rate. More conventional imaging tools, such as a CT scan or structural MRI, have an accuracy rate of only about 5% in detecting mild TBI.

“This makes MEG a good functional imaging technique not only for assisting in the diagnosis of mild TBI, but also for assessing the efficiency of mild TBI treatments, such as drugs,” Huang says.

However, MEG-based studies are rare, most likely because only 20 to 30 MEG scanners are available in the United States. In addition to VA San Diego, VA medical centers in Minneapolis, Albuquerque, Boston, Seattle, Philadelphia, and San Francisco have performed MEG research.

Recent animal studies have showed that injury to neurons that play a key role in brain circuitry and activity led to abnormal increases in fast brain waves. Thus, Huang and his team believed that by detecting spontaneous hyperactivity in fast brain waves, they could assess the level of injury to brain circuitry. The latter may be directly related to cognitive deficits, he notes.

In the study, 25 of the participants were active-duty military or veterans who had fought in Iraq or Afghanistan. They had all sustained at least one mild TBI that resulted in persistent post-concussive symptoms for an average of 20 months. The control group included 35 people with combat experience but with no notable history of concussions.

All of the participants were in a resting state during the MEG recordings, which were conducted at UCSD. At the same time, the scientists made major efforts to ensure that the participants were alert. Being drowsy, Huang says, could reduce the high frequency gamma activity and thus lower the sensitivity of the MEG measurements.

Huang and his colleagues plan to expand this research from a group comparison to a single-subject-based approach. That will call for using resting-state MEG procedures to investigate where the abnormal gamma waves emanate from in each person with mild TBI. For a person with mild TBI, the abnormal waves may be from just one or two lobes in the cerebral cortex, not from all four, he says.

“To achieve this, we’ll need to study more people in both the mild TBI and healthy control groups,” he says.

The findings from his most recent study, he says, can be used to help with brain stimulation techniques as a therapy for mild TBI, such as transcranial electrical stimulation (TES) and transcranial magnetic stimulation (TMS). Results from the study suggest that effective targets for TES and TMS treatments are likely to be the pre-frontal cortex and posterior parietal cortex.

Huang and his team are currently working with two TES companies to gain approval of their brain stimulation instruments by the U.S. Food and Drug Administration.

Dr. David Cifu is the principal investigator at the Chronic Effects of Neurotrauma Consortium, a joint project of VA and the Department of Defense that researches the impact of combat blasts on the human brain. He believes Huang’s findings should be further explored over a long period with many participants.