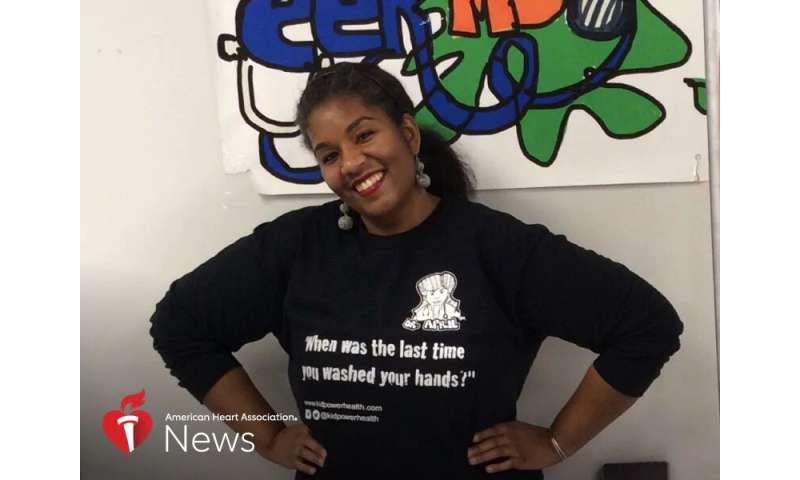 One of the most valuable lessons in pediatrician April Inniss’ medical career came from an 8-year-old boy.

Inniss was just out of medical school and was asked to draw blood from the terrified young patient at a Boston hospital. The child was diagnosed with chronic stomach issues, and had a distrust of health care providers.

“He had a reputation for kicking, screaming and biting,” she said. “I was fresh off the block and not at all sure how to deal with that.”

She turned to her artistic side, quickly sketching out quirky characters to represent white blood cells. The boy loved it, and she drew his blood easily. The impact of that encounter didn’t sink in until she saw the boy three years later.

“The first thing he said to me was that he remembered the cells I drew and that when his class learned about blood in school, he was the only one who knew what white blood cells were,” she said. “I was floored.”

With that experience as her initial inspiration, Inniss, 36, has since educated hundreds more children.

She launched the Boston-based program for elementary school students in 2017 through her educational company, eekMD. She started the company, which stands for Empowering Every Kid for Maximum Development, to raise children’s health literacy through classes and workshops.

“I’m looking to empower every elementary child, to impart the confidence, knowledge and skills they need to start advocating for their own health,” she said. “Some 30 million adults are without health literacy, which is the ability to speak out and use health services and health information efficiently and productively. I want to help change that by starting with children.”

Starting with children is a good summary of her career. She was influenced early by her mother’s work in public health that focused on vulnerable communities. And she was further inspired by an internship at Sesame Workshop’s Research and Evaluation Department, where she learned to think critically about how to use entertainment media.

“It’s already a big part of people’s lives, so how do we use that to empower kids?” she said.

She’s learned that fun and humor are exactly the tools to empower them.

One of her popular props is a brain-shaped gelatin mold, used in the concussion and brain science program. That lesson stuck with Mia McCants and her mother, Casstrena Moses.

“My daughter learned so much,” Moses said. “Especially with a mold of a brain made out of Jell-O.”

“We shook it up and Dr. April said that’s what happens when you shake your brain up a lot—you can get damage,” added Mia, who was 7 when she attended the Mini Medical School course last year. “She let us touch it and explained all the parts.”

“I’m a kindergarten teacher, and I was quite amazed at how she was engaging these young kids and maintaining their interest,” she said. “I ended up having her give a workshop for children at our church, talking about the body as a whole and how to keep it healthy and germ-free. Everyone loved it.”

Inniss’ latest project, which she hopes to launch this spring, is a health-focused podcast for youngsters. She sees it as yet another opportunity to make a bigger impact on health in her unique way.