Skip to content
HomeSkin & Body CareBubble, a New Skin-Care Brand for Teens, Is About to Take Over Your TikTok

Shai Eisenman, the CEO and Founder of Bubble, is 29 years old. A founder's age isn't typically on my list of interview questions, but Bubble, a new skin-care company created "with teens, for teens," is all about adolescence.

Eisenman treated me to an early cut of the brand's launch video, which features Jazz Jennings, Laurie Hernandez, Rudy Pankow, Jonathan Daviss, Madison Bailey, Noah Beck, Nia Soux, Colin Ford, and Chase Hudson. The ambassadors span genres — Hernandez is an Olympian, Davis is a Netflix hunk, Hudson is a TikToker — and some of them do crack age 20. "During focus groups, I was like 'What world am I living in?'" Eisenman tells me. "I just felt so old, and I had no idea who the people they were talking about were." But she knows them all now, and what they have in common is a reach into Generation Z, which is exactly where Bubble is hoping to land.

Another major draw for teens — and perhaps the reason why the brand already has 31,000 Instagram followers — is the fact that Bubble comes approved by Hyram Yarbro, the face of massively popular @skincarebyhyram and so-called "Gen Z whisperer." According to Eisenman, Yarbro brought his mantra, "ingredients don't lie, bitch," to his decision to partner with the brand. He's been testing the products since early this year, and Eisenman says he helped guide Bubble's philosophy and will spearhead their educational content (more on that later.)

The brand, which launches direct-to-consumer on November 19, was created to "balance and clear skin," says Eisenman. She's careful to clarify that the products are intended for the teen who has "the occasional breakout," and not for those with severe acne.

The seven-product lineup instead focuses on natural ingredients that attend to the causes or side effects of acne, like willow bark (a balancing agent, which salicylic acid is derived from) and rosewater (which acts as a toner).

"We knew from the beginning that we wanted it to be made for teens with sensitive skin," says Eisenman. "First, we defined the herbal extracts and active ingredients that we were interested in formulating with, and then we started working on the efficacy." After a year-and-a-half and from seven to 12 submissions for each product, the team landed on the final formulas. 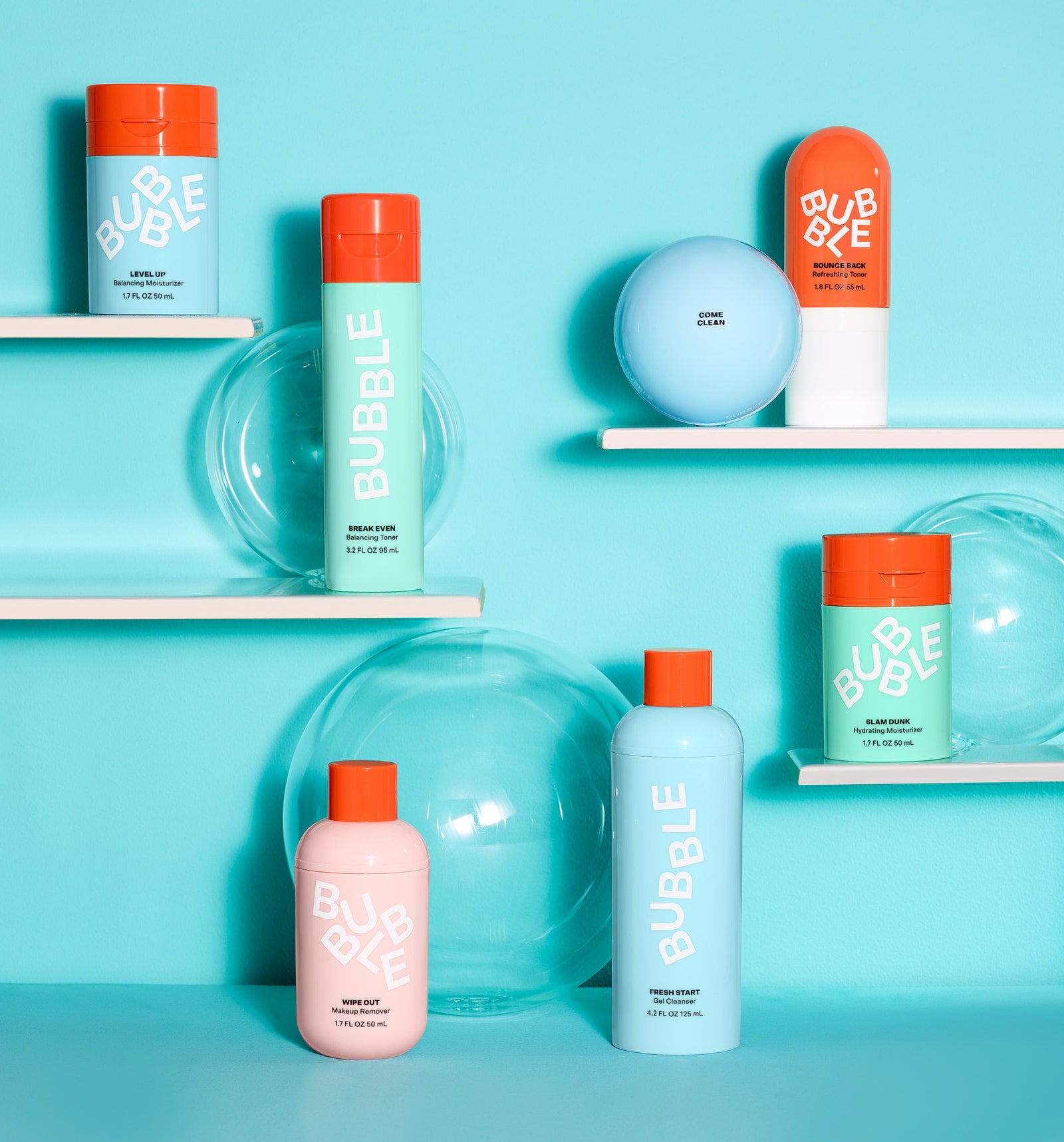 Asked to pick, Eisenman shouts out the makeup remover as her favorite, calling out the silky texture and the fact that you don't need to use a cotton pad with it to remove waterproof mascara. She also tells me that there's some dispute among Bubble's teen ambassadors — she has normal skin and prefers the thicker moisturizer, Slam Dunk, but Yarbro and Cassandra Banks opt for Level Up to balance their oily skin.

In my hands, the whole lineup of glossy, pastel-packaged items with rounded corners feels bubbly, but the bubbliest is Bounce Back, a "refreshing toner" that's meant to be spritzed on whenever you feel like it throughout the day. The formula contains water, rosewater, glycerin, and niacinamide, so it won't over-stress your skin the way a true toner might. ("It's fine [to use multiple times per day] if it's not an alcohol-based toner, which can strip the moisture barrier," confirms cosmetic chemist Ron Robinson.)

I also slathered on Come Clean, an exfoliating kaolin clay mask that contains herbal extracts like grape seed oil, lavender, and calendula. Unlike some brush-on clay masks, it didn't tighten and crack against my skin, but still left my T-zone feeling refreshed after rinsing off. (It's also packaged in a cute sphere, and has an applicator brush included.) And to weigh in on the moisturizer debate: for now, I'm team Slam Dunk, as the slightly heavier hydrating moisturizer had a nice weight on my dry winter skin. 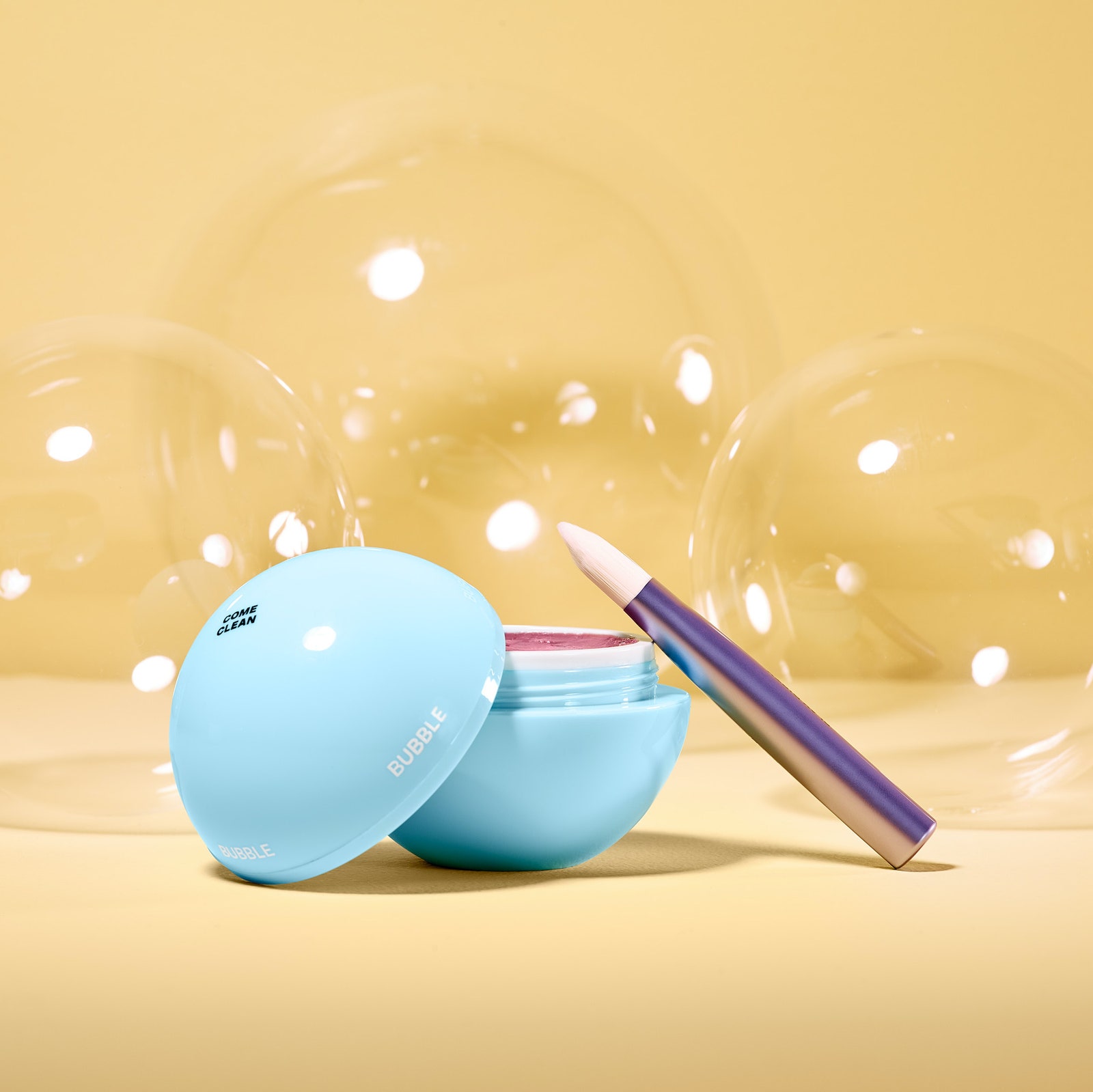 With teenage budgets in mind, all the formulas are under $19. "I feel like a lot of brands say that they're targeted towards teens, but the pricing is not anything that the average teen could afford," Eisenman says.

Since not all teens are as educated about skin care as Yarbro, he helped Bubble launch an educational portion of their site called Skin School, which aims to teach teens basic skin-care tips and ingredient information. The information is "super basic," Eisenman says, but she's right that at some point in your life, someone had to tell you to change your pillowcases and wash your makeup brushes. In 2020, why shouldn't it be the internet?