If you thought dealing with blackheads, whiteheads, and cystic acne was hard, meet hidradenitis suppurativa (HS). The chronic inflammatory condition, thought to be related to acne, is a condition that's not only difficult to pronounce but is also incredibly difficult to live with, too.

Estimated to affect about one to four percent of the global population, HS, also known as acne inversa, is a chronic inflammatory skin condition characterized by inflamed and swollen bumps and nodules that are typically painful and can drain fluid or pus. "They commonly rupture and release a foul-smelling drainage and are most commonly developed in the armpits, under the breasts, and in the groin area," explains Joshua Zeichner, the director of cosmetic and clinical research in dermatology at Mount Sinai Hospital in New York City. Additionally, pockets (called sinus tracts), can also form under the skin. HS abscesses often heal very slowly and can recur over time if left untreated.

While dermatologists don’t know exactly why HS happens, they are aware of factors that can make the skin condition worse in patients. "[HS] can interfere with your everyday activities and be a significant source of psychosocial distress and poor self-esteem," says Zeichner.

Unlike acne, which affects the sebaceous glands, HS develops in the sweat (or apocrine) glands. "The underlying mechanism [of HS] is believed to involve a dysfunction of apocrine sweat glands, and genetics play a significant role," says Hadley King, a board-certified dermatologist in New York City.

Although HS is not the acne that's found in the sebaceous glands, it’s "not uncommonly seen in the same patient who may have acne, called follicular occlusion triad or tetrad, when severe breakouts elsewhere on the body also occur," says Shari Marchbein, a board-certified dermatologist in New York City.

Because HS is a chronic condition, most folks who are diagnosed with the painful skin condition will likely experience recurring and often worsening symptoms over a long period of time. It's important to treat HS in the early stages because the condition can get worse with draining sores that can be painful, have a foul smell, and affect your quality of life. Treatment for HS can include multiple factors, including using an antibacterial cleanser daily, topical or oral medications, and cortisone injections to treat inflamed bumps. "Humira, the only FDA-approved treatment for psoriasis, is [an injection] that can be life-changing for patients," says Zeichner.

Many patients suffer for years before they get a correct diagnosis, attributing it to bad razor bumps. "The most important thing is to see a board-certified dermatologist early, before scarring and cystic sinus tracts occur (as these are permanent and can be very disfiguring)," explains Marchbein. "The pain these patients also experience, emotionally and physically, can take a real toll on their quality of life."

If you think you might have HS, it's vital that you speak with a dermatologist ASAP. If your derm suspects that you might have HS, they will first ask you where you have any lumps or nodules, drainage (if at all), and any other signs of HS. Next, they will examine all of the potential HS lesions on your body and see if those markings have any specific characteristics of HS lumps, distinguishing them from breakouts, common boils, or any other acne-like bumps. 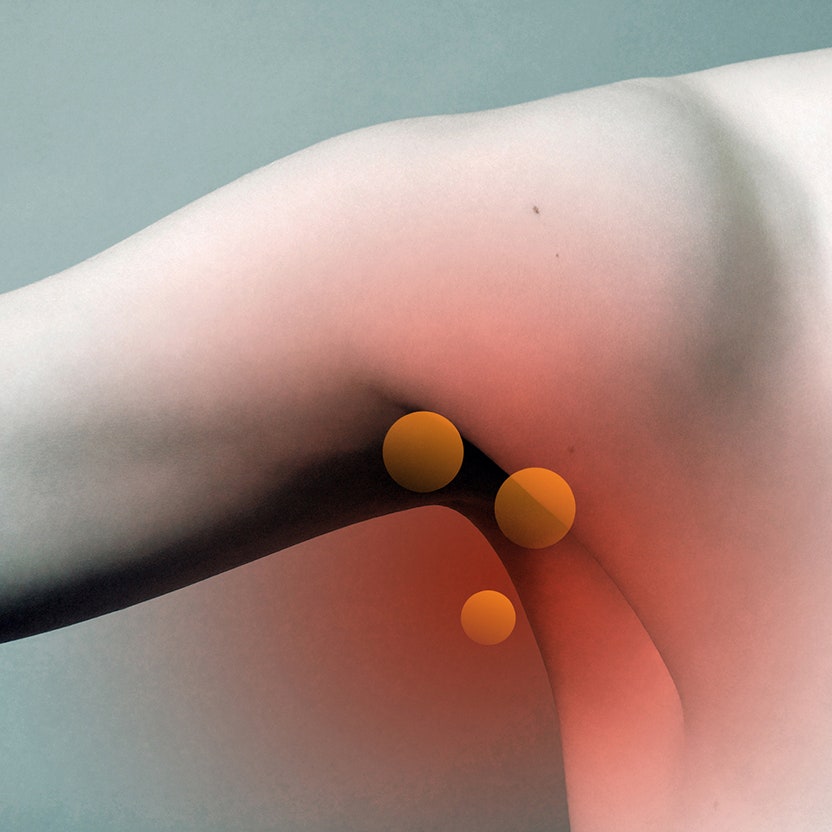 If any of the lesions are leaking, your dermatologist might swab some of the fluid onto a slide for further examination. Through this exam, they will be able to tell if you have some sort of infection.

Finally, your dermatologist will talk with you about your lesions, ask about your symptoms, ask when the bumps started to appear, and other information needed to help give an accurate diagnosis. If you do, in fact, have HS, it will be categorized into one of three stages.

The diagnosis of HS really depends on the presence of inflamed bumps and nodules and is broken down into three stages. Stage 1 is the mildest form of HS, where isolated boils can be sometimes found formed into multiples, but they are without tunnel (or sinus tract) formation. If you think you might be suffering from HS, Stage 1 is the best, most mild stage that you'll want to catch this skin condition in, as it needs to be detected and treated early on to prevent further development and issues down the line.

Stage 2 of HS might involve more moderate boils that can appear throughout the body, and there is often some degree of scarring of the skin. The abscesses that originally appeared under your skin in Stage 1 might now become further aggravated and break open, producing that foul-smelling pus. Although tract formation is possible during Stage 2 of HS, it's pretty minimal compared to Stage 3.

Stage 3 of HS is the most severe and is the stage that's the most life-impacting. In Stage 3, you might find a broader and more widespread development of the boils, including tract formations. Unfortunately, pain and scarring can be expected during this stage of HS. This stage is the most difficult to treat, and if the HS formations are starting to severely impact your quality of life, it might be time to consider surgery to remove painful boils, tracts, and scars. "In severe cases of HS, it may require operations to open up large cysts or sinuses under the skin," explains Zeichner.

HS most commonly develops after puberty, usually in your teens or 20s. The condition is more common in women and people with a family history of HS. Additionally, HS is more common in people who are overweight and those who are smokers. It's important to note that, just because you might be obese or taking multiple smoking breaks throughout the day, doesn’t mean you will develop HS.

According to Marchbein, there is no known way to prevent the development of HS because it occurs in genetically susceptible individuals for a variety of reasons which have yet to be fully elucidated. That being said, there are ways to help minimize HS flare-ups and to treat current HS lesions.

Along with common treatments such as cortisone shots, topical and oral medications, and antibacterial washes, below are a few dermatologist-approved ways to diminish HS breakouts.

Because HS is thought to be influenced in part by your hormones, your diet might actually be playing a role in those HS flare-ups. Studies have shown that dairy and sugar can raise your insulin levels, which can cause your body to overproduce androgens and potentially make your HS even worse.

Additionally, one study suggests that brewer's yeast can cause severe reactions in those with HS. Brewer's yeast can be most commonly found in foods including beer, pizza dough, and bread. No, it's certainly not easy to decrease your dairy, sugar, and brewer's yeast intake, but it might all be worth trying it if you’re really struggling with HS and looking for potential ways to prevent a flare-up.

Because it’s more commonly found in women, HS is thought to be linked to an imbalance of hormones. “Since hormones may influence HS, we can use anti-hormonal drugs, like spironolactone and birth control pills, to directly oppose the effect of testosterone on oil glands and stop you from ovulating and pumping testosterone into the blood respectively, ultimately keeping your hormones from interacting with the oil glands in the first place," explains Marchbein. “Spironolactone’s mechanism of action is to block androgens, such as testosterone, from binding to and stimulating sebaceous glands. I use this for both adult female acne as well as HS (and oral contraceptive pills are FDA-approved to treat acne in women).”

Having pride for your body, no matter what size or shape, is important when it comes to self-love, but if you're struggling with constant HS flare-ups, you might want to reconsider your diet and exercise routine. Unfortunately, studies suggest that at-risk people who have a high body mass index (BMI) have a higher chance of developing HS and might also experience more severe symptoms, such as super painful boils and scarring.

Consider talking to your primary-care physician about ways in which you can adjust your diet and exercise routine in order to help prevent and reduce HS flare-ups.

Not only can smoking negatively affect your lungs, but it can also impact your HS, too. According to a 2014 study, smoking tobacco has been associated with an increased prevalence of HS, as well as more severe HS symptoms. 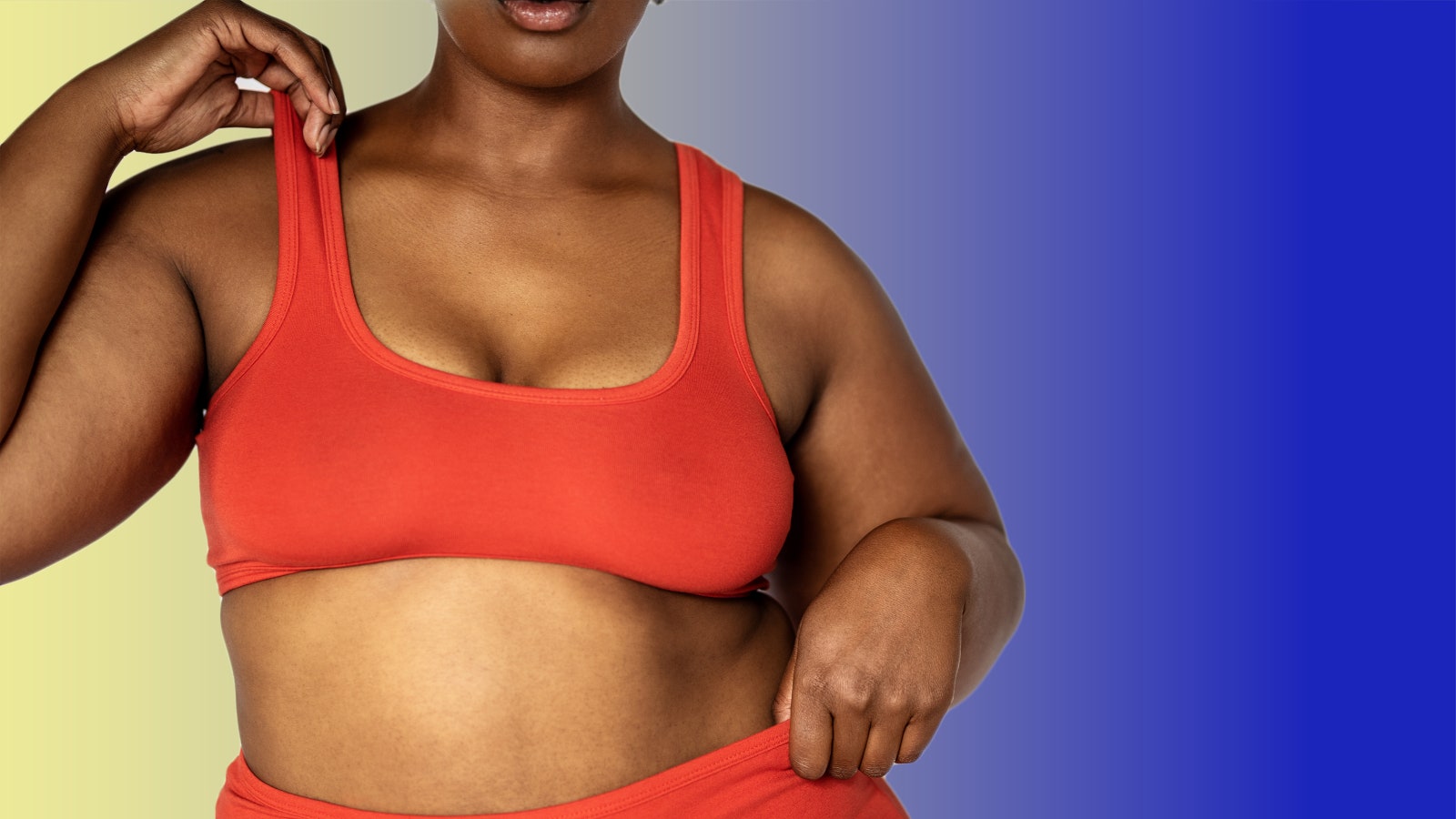 Everyone loves an athleisure moment, but these types of close-fitting clothing might be doing more harm than they’re worth. The friction caused by tight, synthetic clothing could be irritating your HS lesions further. "Stick to loose-fitting clothing to minimize friction on the skin," suggests Zeichner. This is probably a great time to pull out that matching, comfy, loose-fitting loungewear set. Also, it’s suggested to avoid bras that contain underwires and underwear made with tight elastics, if you can.

When it comes to HS, don’t overlook the power of an effective body cleanser. "Stick to antimicrobial cleansers, like Hibiclens in the groin, under breasts, and in the armpit areas to keep bacteria levels low and minimize the risk of infections or flares of the condition," says Zeichner.

Depending on what stage your HS might be in, your dermatologist may give you topical or oral medications or provide you with cortisone injections to treat inflamed bumps. “There is one FDA-approved treatment for moderate to severe cases of [HS] called Humira,” says Zeichner. “This injectable biologic medication works by lowering levels of the immune signals in the body that cause the skin inflammation.”

As if our skin doesn’t go through enough stress during the summer months (think oily skin, more acne, and painful sunburns), heat and humidity might also be making your HS worse, too. If you live in a hot or humid climate, consider controlling the temperature in your living space with an air conditioner or fan. Keeping your skin dry and sweat-free while at home may help prevent further HS lesions from popping up.

Speaking of staying sweat-free, antiperspirants have been known to irritate underarms, and if you’re prone to HS in your pits, you’ll want to avoid antiperspirants if possible. “In some cases, antiperspirants can be irritating,” says Zeichner. "Plus, antiperspirants work by forming a plug within the sweat glands, which theoretically, can make matters worse." Instead, Zeichner suggests sticking with a deodorant, rather than an antiperspirant, to neutralize body odor.

If you can tolerate shaving over HS lesions, Zeichner says to go for it, but there are other options you should consider in order to remove unwanted body or facial hair without having to deal with a sharp razor. "Shaving under the arms is OK if you can tolerate it. However, I often recommend permanent hair removal options like laser hair removal to minimize irritation or inflammation in those areas,” says Zeichner.

However, laser hair removal isn’t the best option for everyone, considering how pricey it can get, how time-consuming it can be, and the fact that it isn’t compatible for all skin tones and hair colors, unfortunately. That being said, investing in laser hair removal in the areas where you have HS could minimize discomfort significantly.

Just like with many inflammatory skin conditions (looking at you, acne), stress might be contributing to your inflamed HS condition. Practice stress-reducing techniques to help prevent HS flare-ups, such as meditation, mindfulness, journaling, or anything else that might help you relax.