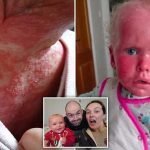 Girl, 2, has such severe psoriasis her skin is ‘lobster red’ and she is shunned by strangers over fears she is contagious Maisie Buchanan, two, has a severe skin condition called chronic infant psoriasis The condition causes her entire body to go bright red and dry and scaly Her parents, from Falkirk, say strangers in
Read More
Health Problems