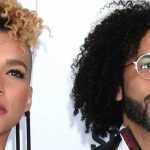 Daveed Diggs has been featured in television shows like “Black-ish,” “BoJack Horseman,” “Star Wars Resistance,” and “Snowpiercer,” but he is known best for portraying Marquis de Lafayette and Thomas Jefferson in Lin Manuel Miranda’s “Hamilton” (via IMDb). His romantic partner, Emmy Raver-Lampman, has been in series such as “American Dad!” and “Jane the Virgin,” and she
Read More
Health Problems