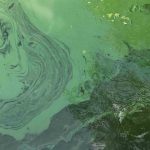 Toxic algal blooms can be devastating to natural waterways, robbing them of oxygen, creating dead zones, and sickening people and animals. However, they may also be beneficial, potentially helping combat the progression of neurodegenerative disease, a URI College of Pharmacy study is showing. Assistant Professor of Biomedical and Pharmaceutical Sciences Matthew Bertin is teaming up
Read More