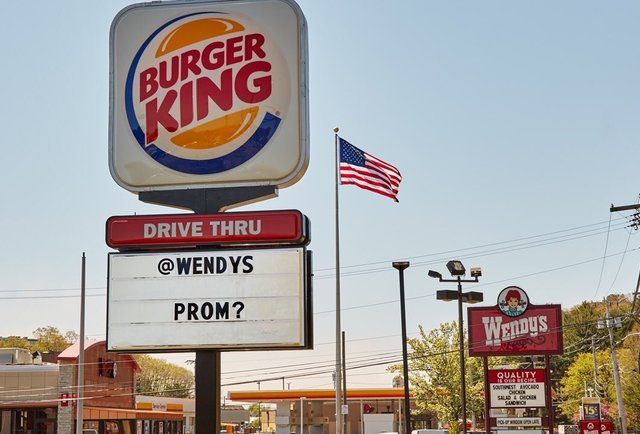 Late spring is here which means one thing: it is the thick of prom season. Before the big day comes promposals, which can be intimidating — especially when you don’t know which way it’s going to go. Fear, however, did not stop a Burger King in Lynn, Massachusetts from asking the Wendy’s next door (very publicly) to prom via a storefront sign.

Frankly, we’d be a little scared if we were Burger King waiting for a reply back from Wendy’s, who’s delivered some pretty savage burns to their competitors on Twitter. This time though, the red head spared BK and agreed to go — under a few conditions.

Ok, but don’t get handsy and we have to be home by 10. https://t.co/tQunlsqecG

Burger King then changed their sign and it’s pretty adorable.

[email protected] looking forward to it. let’s aim for king and queen of prom. ?? pic.twitter.com/KMBktLPLfl

“@wendys looking forward to it. let’s aim for king and queen of prom,” BK tweeted with a photo of the new sign that reads, “SHE SAID YES! “

Twitter users are totally loving the fast food romance, too, flooding their tweets with replies to the saga.

You’ll find that perfect someone

AND THE PROM QUEEN! BOW TO YOUR QUEEN!

Moon Pie, the snack company behind those marshmallow-filled, chocolate-covered pies made with graham crackers, is another brand who’s social media game has been crazy strong as of lately. Seizing the opportunity to get in on the viral moment, they responded with a hinge of playful jealousy for not asking Wendy’s first.

We’ll save you a dance or two for sure

The pig-tailed fast food chain may have let Burger King slide this time by saying yes to prom, but McDonald’s did not receive the same treatment. Wendy’s threw a couple quick jabs at McDonald’s via Twitter.