Skip to content
HomeHealth News6,000 daily steps is enough to cut risk of early death in half, study

Ten thousand daily steps is not the sweet spot for health, according to a study that suggests just 6,000 is enough.

American researchers have found that getting between 6,000 and 8,000 steps each day reduces the risk of an early death for people over the age of 60 by up to 54 per cent.

Any more than 8,000 steps per day has no added benefit, according to the study, despite what fitness gurus may say.

The team from the University of Massachusetts Amherst reviewed findings from 15 studies which looked at the effect of daily steps on mortality from all causes for nearly 50,000 people in four continents.

Getting in your steps – regardless of the pace at which you walked them – was the key to a lower risk of death.

Dr Amanda Paluch, lead author of the study, said: ‘What we saw was this incremental reduction in risk as steps increase, until it levels off and the levelling occurred at different step values for older versus younger adults.

‘Interestingly, the research found no definitive association with walking speed, beyond the total number of steps per day.’

People under the age of 60 should aim to get at least 8,000 steps each day for the greatest reduction in risk of a premature death, the study found. 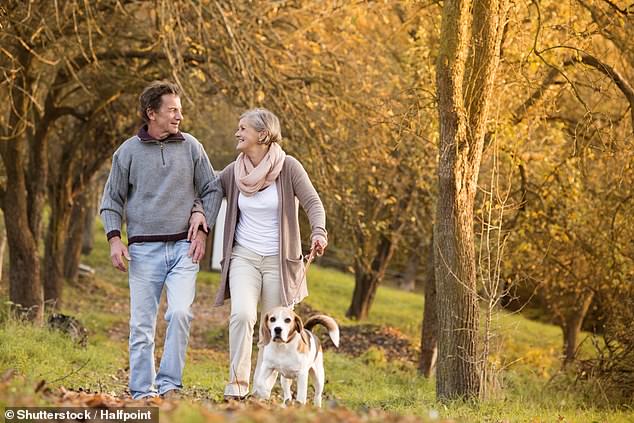 Getting between 6,000 and 8,000 steps in each day reduces the risk of an early death for people over the age of 60 — and any more than that has no added benefit

Dr Paluch said the magical 10,000 steps a day target was not based on science and came from a 1964 Japanese marketing campaign to sell pedometers.

To find the optimal step count, the team sorted 47,471 adults from the studies into four groups based on their average daily steps.

Among the three groups with the greatest number of steps, there was 40 to 53 per cent lower risk of death, compared to the lowest quartile group who walked fewer steps.

After breaking down volunteers by age, they found the risk of a premature death for over-60s flattened out at between 6,000 and 8,000 steps, with no added benefit beyond that.

The findings were published in the Lancet Public Health journal.

It comes after a study in September found that walking at least 7,000 steps a day reduced middle-aged people’s risk of premature death — by 72 per cent.

Published in JAMA Network Open, the researchers tracked 2,110 people ages 38 to 50 and followed them for an average of nearly 11 years starting in 2005.

Dr Paluch added: ‘Steps are very simple to track, and there is a rapid growth of fitness tracking devices.’

‘It’s such a clear communication tool for public health messaging.’

‘The major takeaway is there’s a lot of evidence suggesting that moving even a little more is beneficial, particularly for those who are doing very little activity.

‘More steps per day are better for your health.’

A study published in January found people who wear activity devices like Fitbits and Apple take an extra 1,200 steps each day and complete nearly 50 minutes more of exercise per week.

Researchers examined the results of over 100 randomised trials of wearable tracking gadgets, involving nearly 17,000 adults over the past decade.

Publishing their findings in the BMJ, academics from the University of Copenhagen described the daily activity increases as ‘small to moderate’.

But they said that the devices could still be useful over longer periods of time, given that most adults don’t meet recommended activity levels.

HOW MUCH EXERCISE YOU NEED, ACCORDING TO THE NHS

To stay healthy, adults aged 19 to 64 should try to be active daily and should do:

A good rule is that 1 minute of vigorous activity provides the same health benefits as 2 minutes of moderate activity.

One way to do your recommended 150 minutes of weekly physical activity is to do 30 minutes on 5 days every week.

All adults should also break up long periods of sitting with light activity.