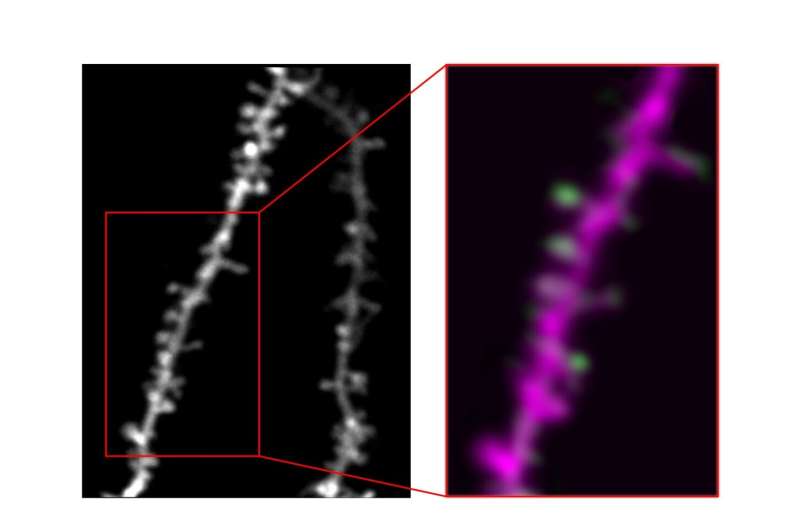 Learning is known to promote the creation of new connections in the brain, particularly excitatory synapses, synapses that increase the likelihood of action potential firing in neurons. Action potentials are changes in electrical potential that are linked to the passage of impulses on the membranes of muscle or nerve cells.

Neuroscience studies showed that learning ultimately leads to the formation of new dendritic spines, small protrusions emerging from a neuron’s dendrites (i.e., complex, branch-shaped extensions of cells). While this finding is widely documented, the functions of these newly formed, learning-related dendritic spines is still poorly understood.

Researchers at University of California, San Diego have recently carried out a study investigating how learning affects the genesis and development of dendritic spines in more depth. Their findings, published in Nature Neuroscience, suggest that the formation of new spines during learning could in fact be guided by the potentiation of some functionally divided, pre-existing spines.

“We’ve known for a long time that, when an animal learns, new connections—or synapses—form between neurons in the brain,” Nathan G. Hedrick, one of the researchers who carried out the study, told MedicalXpress. “But how do the neurons ‘know’ the appropriate connections to be made? And how do these changes happen without just ‘confusing’ a neuron, which already has thousands of such synapses?”

These observations suggest that some “active bundling” of information can occur at the single-neuron level. In their paper, the researchers investigated this hypothesis further.

“We reasoned that new synapses formed during learning might follow the clustering rules of their parent neurons, but we also knew that explaining how such organization is conducted would be a very difficult path,” Hedrick explained. “In addition to the technical challenge of finding the same individual synapses in the brain of a living, behaving animal over many days while it learns, understanding how these changes occurred would require the fusion of several cutting edge (and challenging) approaches.”

In their experiments, Hedrick set out to better understand how neurons organize the thousands of inputs they receive from the environment and how this arrangement evolves during learning. This could significantly enhance our present understanding of the human and animal brain.

To identify the function of new learning-related synapses with a good degree of confidence, the researchers had to use techniques that allowed them to visualize both individual synapses and their activity over time. In addition, they required methods to determine how the synapses’ activity relates to a specific learned behavior.

“We achieved this using longitudinal 2-photon imaging of the fluorescent glutamate biosensor, iGluSnFR, in mice as they learn,” Hedrick explained. “In short, this approach allows us to see fluorescent neurons in the brain of an awake animal (a mouse), and track synaptic activity based on the brightness of the iGluSnFR signal (reflecting increases in glutamate release when synapses are active) as an animal behaves and learns.”

To understand how neurons “search” for appropriate information during learning, Hedrick and his colleagues used a technique called correlated electron microscopy (CLEM) to gather related cellular measurements. They used this technique to the same dendrites they had previously tracked while their sample mice were learning.

Ultimately, this process allowed them to access information that they could not derive solely on the data they collected using 2-photon imaging. This includes visualizations of tiny structures, known as filopodia, which are essentially neuron “attempts” at forming new synapses.

“This approach also allowed us access to information about the inputs to synapses; in other words, what kinds of connections they make,” Hedrick said. “With the collective of these technologies, we showed that new synapses conform to the functional organization of synapses already present on a neuron through a game of cellular trial and error: when the neuron detects a synchronized cluster, it locally samples other nearby inputs until it finds one that is also in sync and gets rid of any new synapses that don’t meet these requirements.”

The findings gathered by this team of researchers could have numerous important implications. Firstly, they show that neurons are highly skilled at organizing their own connections.

In their paper, Hedrick and his colleagues outlined a new biologically feasible mechanism that could allow brain cells to search for information that complements signals they are already receiving from the environment. This mechanism may be a crucial part of the widely documented ability of neural circuits to change in a coordinated fashion while animals and humans are learning.

“Our findings are even more incredible when considering that all the events described in this paper likely happen over a very small domain of a single neuron, suggesting that neurons must have a way to differentiate events occurring in one place on their dendrites vs. another,” Hedrick said. “This is consistent with my Ph.D. work, which showed very specific and spatially patterned control of biochemical factors involved in the induction of structural changes to synapses.”

The researchers’ findings are thus consistent with previous hypotheses regarding the molecular requirements of synaptic patterning, and provide a more specific target for understanding what happens when any of the genes encoding these patterns are mutated. In their experiments, Hedrick and his colleagues were also able to identify the axons (i.e., elongated portions of a neuron resembling “cables” through which impulses travel) forming new synapses during learning.

“Our initial hypothesis was that new synapses would likely connect to the same axons as some of their neighbors, which would basically ensure the synchronized activity that they were looking for,” Hedrick said. “This was the hypothesis that was easiest to swallow, since it was a little hard to imagine the separate-but-synchronized inputs being abundant enough to always be within filopodia’s reach of a given dendrite.”

While Hedrick and his colleagues were able to find some examples of the “cable-sharing” structure that they hypothesized in their data, they rarely observed a similar organization for new synapses. Instead, they found that the axons of newly formed synapses almost never appeared to connect with anything else on the same dendrite.

“This is an amazing result, as it suggests that the locally synchronized activity that new synapses display probably corresponds to separate—but nonetheless synchronized—upstream neurons,” Hedrick said. “Essentially, we think that new synapses are truly binding separate information streams together on single dendrites.”

As the function of individual neurons is known to be related to how its synaptic information is linked together, the results gathered by this team of researchers could pave the way towards a better understanding of how neurons optimize their function-related behavior during learning. In their next works, Hedrick and his colleagues hope to identify the brain areas from which axons associated with new synapses originate. This would shed further light on their unique functions.