An incentive to switch to e-cigarettes? Smokers have more ‘bad’ and less ‘good’ bacteria than vapers putting them at greater risk of disease, finds study

Smokers have more ‘bad’ and less ‘good’ bacteria than vapers, researchers have discovered.

This puts them at a higher risk of colon cancer, colitis, Crohn’s disease and obesity, the first-of-its-kind trial suggests.

Scientists also uncovered that e-cigarette users have similar microbiomes to those without the notoriously bad habit.

Newcastle University experts today labelled the results of their study an ‘incentive’ for smokers to switch to e-cigarettes. 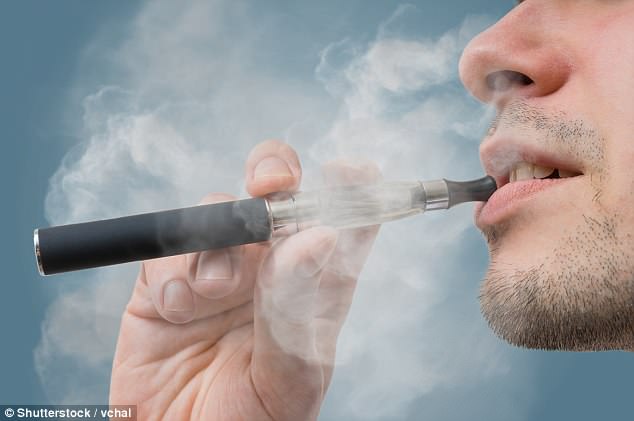 Nearly three million people in Britain use e-cigarettes, which doctors are advised to tell patients are better than smoking traditional fags.

But the gadgets have been subject to huge controversy recently, due to worrying links between heart and lung damage and vaping.

The Newcastle experiment, led by Dr Christopher Stewart, is the first to compare the microbiome between vapers and traditional smokers.

In recent years, the world of science has uncovered the gut is at the heart of just about everything, with many calling it the second brain.

The new findings add smoking to the growing list of habits that can damage the microbiome, alongside junk food and antibiotics among others.

How was the study carried out?

Faecal, mouth and saliva samples were given by 10 e-cigarette users, 10 tobacco smokers and 10 non-smokers for the study.

An analysis revealed the bacteria of the smokers was different to that of the non-smokers and e-cig users in each of the three samples.

They were found to have an increase in Prevotella bacteria, which are linked to an increased risk of colon cancer and colitis.

WHAT PARENTS NEED TO KNOW ABOUT E-CIGARETTES

E-cigarettes use a mixture of flavored liquids and nicotine to create a vapor.

This vapor is then inhaled by the user similarly to how one would smoke a regular cigarette.

Are these devices safe?

Since these devices don’t use traditional smoke, people are under the assumption that they are safe for you.

But the liquid in the e-cigarettes can contain harmful toxins and carcinogens including anti-freeze.

The nicotine in the e-cigarettes also had addictive components and can lead to other tobacco use. This can hinder brain development in teens.

Also, the devices can overheat and explode if defective.

The Food and Drug Administration does not certify e-cigarettes as a product to get over smoking regular cigarettes.

In smokers, there was also a decrease in the presence of Bacteroides, a beneficial bacteria, of which lower levels are linked to Crohn’s disease and obesity.

However, a further analysis revealed the samples of e-cigarette users and non-smokers were similar, according to study published in PeerJ.

What did the researchers say?

Dr Stewart said: ‘The bacterial cells in our body outnumber our own human cells and our microbiome weighs more than our brain.

‘Yet we are only just beginning to understand its importance on our health.’

He added: ‘To find vaping is less-damaging than smoking on our gut bacteria adds to the incentive to change to e-cigarettes and for people to use them as a tool to quit smoking completely.’

But Dr Stewart, of Newcastle’s Institute of Cellular Medicine, warned further trials are needed to examine the effects of smoking on the microbiome.

Advise patients to use e-cigs

It comes after the health watchdog declared doctors should tell patients that e-cigarettes pose less harm than smoking.

Nice released its guidance last month in an attempt to stem the spiralling confusion over the safety of the trendy gadgets.

But in the same breath, the body added evidence on the long-term health impact of vaping is not yet fully understood.

E-cigarettes do not contain the dozens of cancer-causing toxins in tobacco, but do contain dangerous chemicals such as formaldehyde, as well as nicotine.

Studies have linked these toxins to bronchitis and stillbirths in pregnant women. Other trials have shown the toxic flavourings can cause cancer.