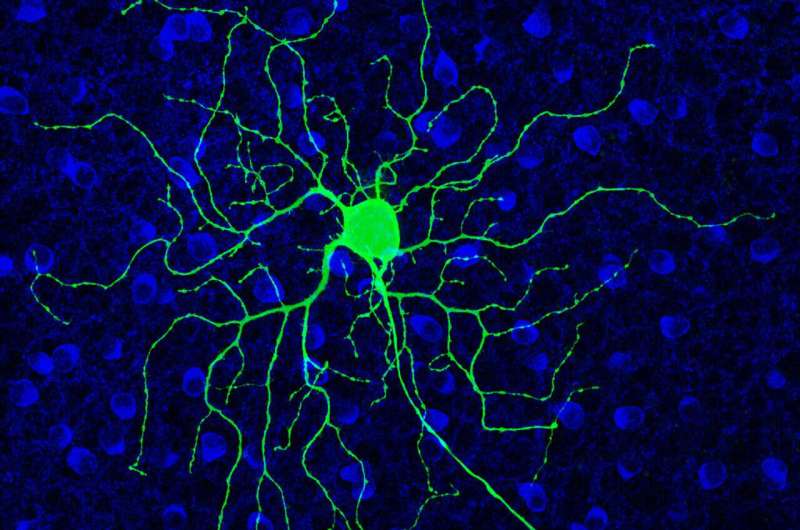 Researchers at the University of California, Berkeley, have found that a drug once widely used to wean alcoholics off of drinking helps to improve sight in mice with retinal degeneration.

The drug may revive sight in humans with the inherited disease retinitis pigmentosa (RP), and perhaps in other vision disorders, including age-related macular degeneration.

A group of scientists led by Richard Kramer, UC Berkeley professor of molecular and cell biology, had previously shown that a chemical—retinoic acid—is produced when light-sensing cells in the retina, called rods and cones, gradually die off. This chemical causes hyperactivity in retinal ganglion cells, which ordinarily send visual information to the brain. The hyperactivity interferes with their encoding and transfer of information, obscuring vision.

He realized, however, that the drug disulfiram—also called Antabuse— inhibits not only enzymes involved in the body’s ability to degrade alcohol, but also enzymes that make retinoic acid. In new experiments, Kramer and collaborator Michael Goard, who directs a lab at UC Santa Barbara (UCSB), discovered that treatment with disulfiram decreased the production of retinoic acid and made nearly-blind mice much better at detecting images displayed on a computer screen.

Kramer suspects that retinoic acid plays an identical role in people with vision loss. But experiments measuring retinoic acid in the eye have not been done on humans because they would be too invasive.

Disulfiram—which is already approved for use by the Food and Drug Administration (FDA) —could establish that link. The researchers are planning to partner with ophthalmologists to conduct a clinical trial of disulfiram on patients with RP. The trial would be carried out on a small set of people with advanced, but not yet complete, retinal degeneration.

“There may be a long window of opportunity in which suppressing retinoic acid with drugs like disulfiram could substantially improve low vision and make a real difference in people’s quality of life,” said Kramer, the CH and Annie Li Chair in Molecular Biology of Diseases at UC Berkeley and a member of the campus’s Helen Wills Neuroscience Institute. “Because the drug is already FDA-approved, the regulatory hurdles are low. It wouldn’t be a permanent cure, but right now there are no available treatments that even temporarily improve vision.”

Kramer, Goard and their colleagues—Michael Telias, a former UC Berkeley postdoctoral fellow now at the University of Rochester Medical Center, and Kevin Sit of UCSB—will publish their findings March 18 in the journal Science Advances.

Kramer acknowledged that disulfiram may not be for everyone. When combined with alcohol consumption, the drug can have severe side effects, including headache, nausea, muscle cramps and flushing.

“If you’re on the drug, and you backslide and take a drink, you will immediately get the worst hangover of your life,” he said, “and that is what makes it a strong deterrent for drinking alcohol.”

But if disulfiram can improve vision, more targeted therapies could be sought that don’t interfere with alcohol breakdown or other metabolic functions. The researchers have already tested an experimental drug named BMS 493 that inhibits the receptor for retinoic acid, and they have also used an RNA interference technique—a type of gene therapy—to knock down the receptor. Both of these procedures also dramatically improved vision in mice with RP.

Three years ago, Kramer and his colleagues reported that retinoic acid generated sensory noise that interfered with remaining vision in mice with RP in the same way that ringing in the ears, known as tinnitus, can interfere with hearing in people who are losing vibration-sensitive cells in the inner ear. They showed that inhibiting the retinoic acid receptor reduced the noise and increased simple light avoidance behaviors in those mice.

But do mice treated with the drugs actually see better?

The new study provides evidence that they do. First, when the mice were young and had healthy retinas, they were trained to recognize and respond to a simple image of black and white stripes displayed on a computer screen. A month later, after most of the rods and cones had degenerated, the image was shown once again. The investigators found that mice treated with disulfiram or BMS 493 responded quite well, even if the image was blurry. By contrast, mice receiving a placebo failed to respond, even if the image was crisp and clear.

In a second type of study, the scientists used a special microscope and a fluorescent protein indicator to light up and examine the responses of thousands of cells in the brain to much more complex visual scenes—a Hollywood movie clip, replayed many times. Individual cells in the brains of vision-impaired mice with RP responded preferentially to particular frames in the movie, and their responses were much stronger and more reliable than those of mice that had been treated with disulfiram or BMS 493.

The responses were so reliable, Kramer said, that the investigators could deduce which specific scene had triggered the cell’s response, but only in the mice that had been treated with one of the drugs.

Both the behavioral results and the brain imaging results suggest that the drugs improve vision and not just light detection.

“Treated mice really see better than mice without the drugs. These particular mice could barely detect images at all at this late stage of degeneration. I think that that’s quite dramatic,” Kramer said.

In 2019, Kramer and his team laid out the mechanism behind hyperactivity caused by degeneration. They found that retinoic acid, which is well-known as a signal for growth and development in embryos, floods the retina when photoreceptors—the rods, sensitive to dim light, and the cones, needed for color vision—die. That’s because photoreceptors are packed with light-sensitive proteins called rhodopsin, which contain retinaldehyde. When the retinaldehyde can no longer be absorbed by rods and cones, it is converted to retinoic acid by an enzyme called retinaldehyde dehydrogenase.