It’s not just fat people who lie about how much they eat! Everyone consumes 900 more calories than they admit every day – the equivalent of THREE McDonald’s cheeseburgers

Everyone eats the equivalent of three extra McDonald’s cheeseburgers a day than they admit, a study claimed today.

And both thin and fat people fib about the amount of food they consume.

Researchers at the University of Essex analysed food diaries filled out by over 200 Britons. They then tracked how much energy they actually burned, in order to find any disparity.

Results revealed everyone, regardless of their weight, misreported the amount they ate — omitting an average of 900 calories worth of food per day.

This is also the equivalent of five pints of lager or seven packs of ready salted crisps.

While obese people technically omitted more calories each day than thinner people, they made up for it by burning more energy from moving their heavier bodies while doing day-to-day tasks.

The authors of the study say their findings cast doubt on the merits of public health measures that rely on calorie counting. 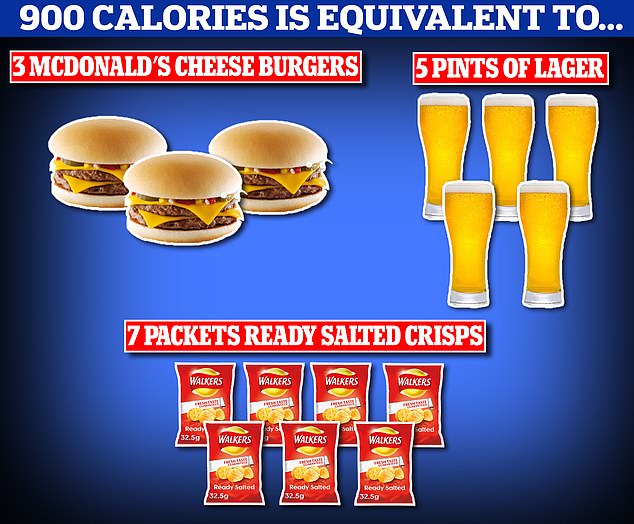 A study claims everybody fibs about how much they eat. Researchers found Britons scoffed 900 more calories, equivalent to three McDonald’s cheeseburgers, or five pints of lager, or seven packets of ready salted crisps than accounted for in food diaries

More than 42million adults in the UK will be overweight by 2040, according to ‘wake-up call’ projections.

Cancer Research UK analysis suggests 71 per cent of the country will be fat by then.

This includes 36 per cent who are likely to be obese — meaning they will outnumber people in the less severe category for the first time.

Latest date for 2019 shows that 64 per cent of adults are overweight or obese, with figures rising year on year.

The data comes amid a storm around the Government’s anti-obesity drive, after Boris Johnson U-turned on a ban on buy-one-get-one free deals for junk food.

CRUK has now called for No10 to reverse course again and ‘take bold action on obesity’.

Being overweight or obese increases the risk of at least 13 different types of cancer and also causes other dangerous conditions such as high blood pressure and type 2 diabetes.

The study — published in the American Journal of Human Biology — examined 221 Britons between 2013 and 2015.

Volunteers had an average age of 54, were split almost evenly by gender, and about a third had an obese BMI.

After researchers measured the participant’s BMIs they were then asked to fill out a food diary for four days to record what they ate and drank to calculate their average energy intake per day.

This allowed the scientists to see how much energy the participants actually used a day, as the radioactive elements in the water disappear the more calories are used.

By comparing the reported food intake and the actual calories burnt, the researchers were able to guess just how much people were eating. Participants claimed to eat 1,800 calories a day, on average.

But researchers found they actually burnt 2,700 calories on average.

This left them with a gap of 900, which the experts concluded was the extra calories they were consuming each day.

Obese people were found to consume an extra 1,200 calories every 24 hours than reported, while slimmer people underreported 800 calories.

However, fatter people were found to burn more energy per day — equivalent to an extra 400 calories.

Professor Gavin Sandercock, lead author, said this was due to obese people having to heft around more weight as they went about their day.

‘Bigger bodies need more energy every hour of the day and particularly during physical activity because moving your weight is hard work,’ he said.

He also claimed the findings dispelled a myth that fat people lie more about how much they ate as all body sizes in the study misreported their calories intake.

More than 42million adults in the UK will be overweight or obese by 2040, according to new projections by Cancer Research UK 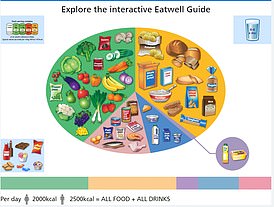 Meals should be based on potatoes, bread, rice, pasta or other starchy carbohydrates, ideally wholegrain, according to the NHS

• Base meals on potatoes, bread, rice, pasta or other starchy carbohydrates, ideally wholegrain

• 30 grams of fibre a day: This is the same as eating all of the following: 5 portions of fruit and vegetables, 2 whole-wheat cereal biscuits, 2 thick slices of wholemeal bread and large baked potato with the skin on

• Eat some beans, pulses, fish, eggs, meat and other proteins (including 2 portions of fish every week, one of which should be oily)

• Choose unsaturated oils and spreads and consuming in small amounts

Professor Sandercock called for an overhaul of Government’s advice on obesity which have relied on so-called calorie counting.

‘Recognising that the measures of energy intake are incorrect might result in the setting of more realistic targets.’

He added that ‘changing the narrative around obese people fibbing about their energy intake’ could also lead to a focus on risk factors for obesity such as junk food and sugary beverages.

The average recommended calorie consumption levels remain at 2,500 calories for men and 2,000 for women, according to those behind the campaign.

The Government recently introduced a calorie labeling initiative forcing cafes, restaurants and takeaway with more than 250 employees to display the calorie on on-prepacked food and soft drinks.

This came despite opposition from industry and eating disorder charities.

However, other measures put forward by No10 to tackle high fat and sugar foods that were scheduled to be brought in at the start of next year have since been delayed.

Prime Minister Boris Johnson decided to scrap a ban on ‘buy one get one free’ junk food deals and a 9pm watershed for sugary snacks in a bid to help poorer families with the cost of living crisis.

The measures were scheduled to come in on January 2023 but proved deeply unpopular with Tory backbenchers.

The Essex study comes on the back of other research this month that warned that eating a bag of crisps every day could lead to a stone of weight gain in a year because Britons drastically underestimate the number of calories in their snacks.

A report by Nesta, a charity that works for social change, warned Britons drastically underestimate the number of calories in crisps and other snacks.

An extra 240 calories per day, equivalent to a large ‘grab bag’ of Walkers, would result in weight gain of around a stone (6.4kg) over the course of a year, the charity calculated.

Obesity is considered one of Britain’s biggest health issues with the latest data showing 64 per cent of adults were either overweight or obese in 2019.

However, a new analysis by Cancer Research UK more than 42million adults in the UK will be overweight by 2040, according to ‘wake-up call’ projections.

The charity’s study suggests 71 per cent of the country will be fat by then.

This includes 36 per cent who are likely to be obese — meaning they will outnumber people in the less severe category for the first time.

In the US an estimated 73.6 per cent of adults are considered either overweight or obese.

Being overweight or obese is known to increase the risk of at least 13 different types of cancer and also causes other dangerous conditions such as high blood pressure and type 2 diabetes.

Treating obesity-related illness is estimated to cost the NHS £6 billion a year.

The Essex study has a number of limitations, first of which being its small sample size might not be representative of the wider population with most participants being from affluent areas.

Another limitation is that participants were aware they were being studied which could have influenced both their eating and exercising behaviours.