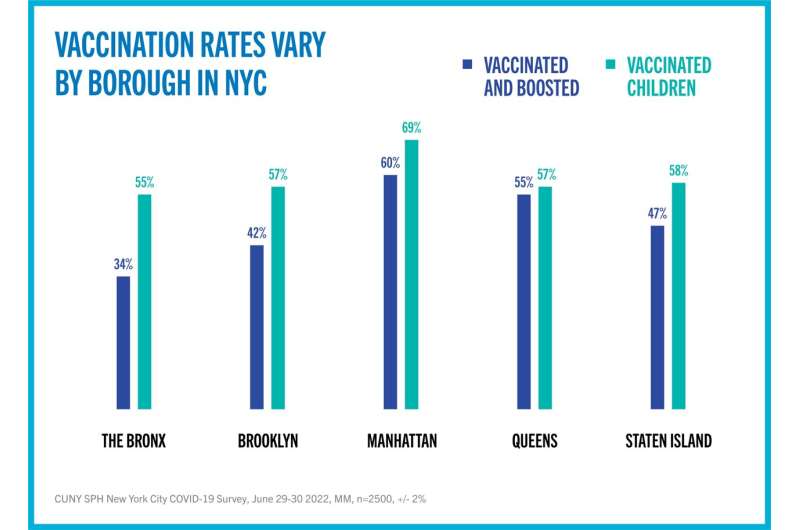 As the nation follows new CDC recommendations to relax COVID-19 restrictions, a new survey of 2,500 New Yorkers conducted by the CUNY Graduate School of Public Health and Health Policy (CUNY SPH) revealed clear differences among the boroughs in vaccine and booster uptake, childhood vaccination, treatment when sick and general trust in the safety and effectiveness of the vaccine. The range of full vaccine and booster coverage across the five boroughs was 60% in Manhattan to 34% in the Bronx, with Queens at 55%, Staten Island at 47%, and Brooklyn at 42%.

“These survey findings help us to examine the blind spots within our communities regarding the continued risks of COVID-19 exposure and need for vigilance in protection,” says Dr. Ayman El-Mohandes, Dean of CUNY SPH. “With recent guidelines of the CDC loosening requirements for COVID-19 quarantining and isolation, more responsibility has been placed on the shoulders of individuals to make better choices for themselves and their families. We as public health advocates must double down on education about testing, prevention and treatment for those at high risk.”

The survey showed adherence to protective measures among most New Yorkers, even amidst general COVID-19 fatigue. The majority of respondents (86%) have received at least one dose of the vaccine, and 60% have had their children vaccinated. Respondents also supported public health initiatives such as vaccine mandates among employers (66%), schools (62%), indoor activities (63%) and international travel (71%). Three-quarters (74%) of New Yorkers stated they would prefer to rely on the vaccine alone or combine it with treatment if they become ill.

Yet when asking about their beliefs, the survey showed pockets of resistance. Only 66% of Staten Islanders agreed that the risks of COVID-19 are greater than the risks of the vaccine. This compared to 76% of respondents in Manhattan, followed by Queens at 75%, Brooklyn at 72% and the Bronx at 70%.

When asked if they trust the science behind COVID-19 vaccines, respondents from Manhattan led the affirmation at 78%, in stark contrast with those from Staten Island at 61%. Falling in between were Queens at 73%, the Bronx at 68% and Brooklyn at 66%.

Furthermore, there remains a gap over the safety of the vaccine: 82% of Manhattanites believe in it, compared with only 72% in Staten Island and 71% in Brooklyn.

When it comes to taking action through vaccine uptake or future treatment plans, the survey also showed a significant difference among boroughs:

“These data suggest it will be vital to ramp up communication efforts with targeted and tailored messages to address the needs of each community and advance health equity,” says Dr. Scott Ratzan, Distinguished Lecturer at CUNY SPH.

Crucially, the poll may suggest uneven availability and access to treatment across the boroughs. Responses from those who reported having been sick with COVID-19 (63%) revealed a wide disparity between those who received one of the approved new treatments and those that did not. These ranged from 30% in Manhattan to only 6% in Staten Island. Others were Brooklyn at 19%, and Queens and the Bronx at 12%. Among those who reported use of approved available treatments, 5% said they had more than one treatment, 4.5% monoclonal antibody, 4.5% Molnupiravir, 4% Paxlovid and 1.4% steroids.