Dogs can SMELL epileptic seizures: Scientists discover man’s best friend sniff out odours on a patient’s breath or sweat and warn them of an impending episode

Dogs may be able to sniff out an impending epileptic seizure, research suggests.

A new study suggests man’s best friend can sense an odour associated with seizures in humans.

When exposed to scents collected during an epilepsy episode, the trained pooches correctly identified those of a patient up to 100 per cent of the time.

Researchers hope this will lead to tests that enable patients to anticipate when a seizure is coming and seek a ‘safe environment’. 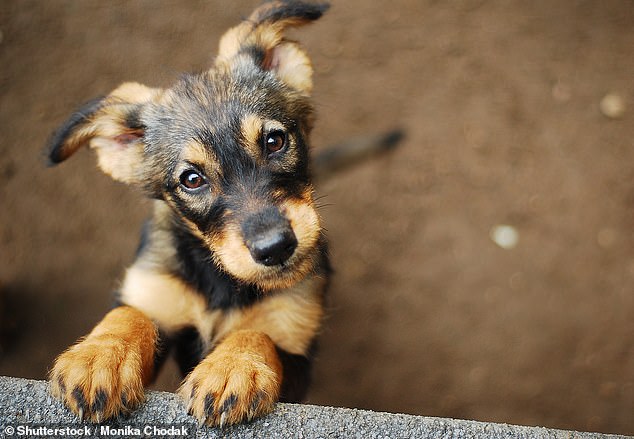 Dogs may be able to sniff out an impending epileptic seizure, research suggests (stock)

The research was carried out by The University of Rennes, in Brittany, northwest France, and led by Dr Amélie Catala, from the laboratory of animal and human ethology.

And the condition affects around 3.4million Americans, according to the Center for Disease Control and Prevention.

Epilepsy is a condition that affects the brain and leaves patients at risk of seizures.

Around one in 100 people in the UK have epilepsy, Epilepsy Society statistics reveal.

And in the US, 1.2 per cent of the population have the condition, according to the Centers for Disease Control and Prevention.

Anyone can have a seizure, which does not automatically mean they have epilepsy.

Usually more than one episode is required before a diagnosis.

Seizures occur when there is a sudden burst of electrical activity in the brain, which causes a disruption to the way it works.

Some seizures cause people to remain alert and aware of their surroundings, while others make people lose consciousness.

Some also make patients experience unusual sensations, feelings or movement, or go stiff and fall to the floor where they jerk.

Epilepsy can be brought on at any age by a stroke, brain infection, head injury or problems at birth that lead to lack of oxygen.

But in more than half of cases, a cause is never found.

Anti-epileptic drugs do not cure the condition but help to stop or reduce seizures.

If these do not work, brain surgery can be effective.

Doctors have relied on smell to diagnose diseases as far back as Hippocrates in ancient Greece.

And recent studies have shown patients with lung cancer, liver disease and diabetes experience a change in the scent of their breaths.

But no study had looked at epilepsy.

The scientists therefore collected odours from five epileptic patients during a seizure, a ‘calm activity’ – such as drawing – and following exercise.

Breath samples were collected by having the patients exhale into a bag.

They also had sweat wiped off their hands, foreheads and the back of their necks with cotton pads.

These odours were then ‘canned’ and exposed to five dogs that have previously sniffed out cancer or diabetes.

Each dog smelt seven cans, with only one containing the ‘seizure odour’.

The experiment was then repeated nine times for each pooch.

Results – published in the journal Scientific Reports – reveal the animals correctly identified the ‘seizure cans’ between 67 and 100 per cent of the time.

And they could tell the control samples with 95-to-100 per cent accuracy.

The dogs also responded to the ‘right’ odour for longer than any of the control scents.

This demonstrates that despite seizures varying widely in their severity – and each of us having different body odours – epilepsy episodes are associated with a specific scent, according to the researchers.

They hope this will lead to tests that anticipate an impending seizure, either via ‘e-noses’ or trained dogs.

The scientists add, however, future studies are required to determine the exact chemical make-up of seizure odours, as well as if the scent is present before an incident occurs.

A spokesperson for Epilepsy Action said: ‘We know dogs can predict seizures, which is why Support Dogs train them.

‘We still don’t know whether they do that by smell or some other sense.

‘So this research is interesting and could be a next step in understanding how dogs can further support people living with uncontrolled epilepsy.’