The family treated as outcasts: FOUR siblings have the same rare skin condition which has destroyed one’s nose and blinded another

Four siblings all suffer from an extremely rare skin disorder that has eaten away one of their noses and blinded another.

Javid, 26, Maria, 19, Sobia, 17 and Aaliza, 9, all have xeroderma pigmentosum (XP), which makes them extremely sensitive to the sun’s UV rays.

The siblings, from a small village in Pakistan’s Sindh Province, live as outcasts because locals fear their condition is contagious.

After being promised government help that never came through, their parents have spent all their savings desperately trying to find a cure for their children, but no treatment has had any effect.

Their father Hussain Bux Sindhi, 48, who earns at most just £57 a month as a taxi driver, said: ‘I have even had to sell my house. The government only provided a few bags of rice.’ 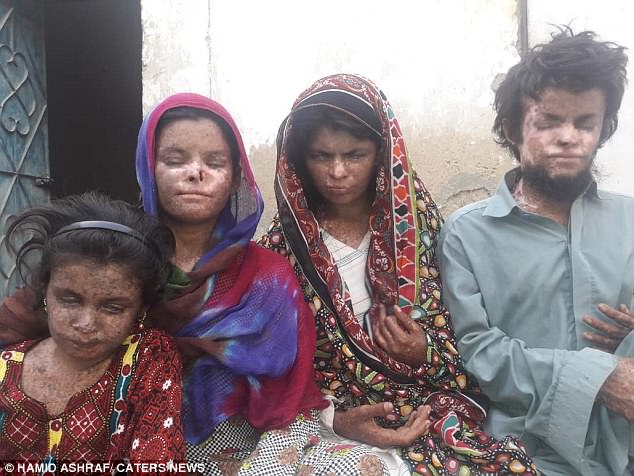 The Hussain family children, who all have xeroderma pigmentosum, live as outcasts in their village in Pakistan because local people fear the condition is contagious

Mr Hussain is speaking out to help raise money towards his children’s treatment.

XP has been described as a ‘one-in-a-million’ condition.

‘Blood is oozing out of her eyes’

Hussain, who lives with his wife Maheen Naseem, 40, claims local villagers force his children to live as recluses, saying: ‘They maintain their distance from them.

‘Some villagers often pass comments which hurt my children.’

The disease, which began when the children were just two years old, has eaten away Sobia’s nose and caused serious problems in the youngest sibling Aaliza’s eyes. 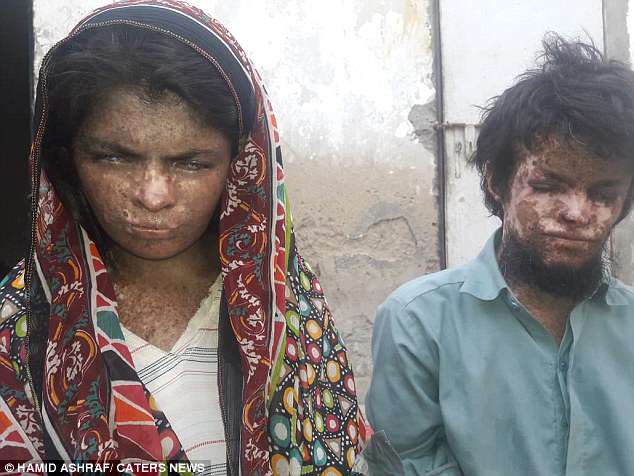 Maria and Javid are the oldest two siblings affected by the incurable condition, which causes their skin to have extreme reactions to sunlight 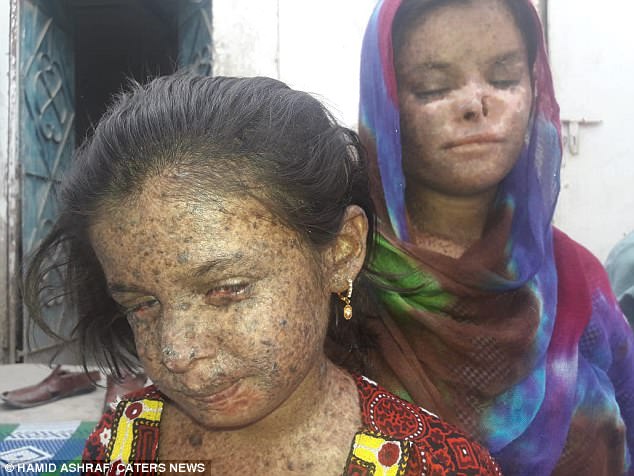 Aaliza, 9, (left) has been nearly blinded by the condition and blood oozes out of her eyes, while the condition has eaten away part of the nose of her sister Sobia, 17

Hussain said: ‘Blood is oozing out of her eyes affecting her eyesight.

‘She is in a terrible pain and often stays indoors.’

WHAT IS XERODERMA PIGMENTOSUM?

Xeroderma pigmentosum (XP) is an inherited condition that causes extreme sensitivity to UV rays from the sun.

It has been described as a ‘one-in-a-million’ condition.

XP is brought on by a genetic mutation.

Due to sufferers being at high risk of sunburn, skin cancer is extremely common among patients.

There is no cure for XP.

Management of the condition includes protection from UV light, frequent skin examinations and prompt removal of any cancerous tissue.

‘I have even had to sell my house’

Hussain said: ‘I have taken them to different hospitals in Pakistan for 26 years but doctors say there is no cure for this disease.

‘I have even had to sell my house. I live in a rented accommodation now.

‘They just said to keep my children away from sunlight.’

After being promised government help seven months ago with no follow up, Hussain has taken to social media to ask the public to help fund his children’s treatment.

He said: ‘The government only provided me some eatables and a few bags of rice.’

People have donated nearly £1,000 to help the family

By Tuesday afternoon, people had donated nearly 150,000 Pakistani rupees (£960) towards their treatment.

Hussain said: ‘There has been a tremendous response.

‘I have received dozens of messages and calls from people across the country expressing their solidarity.

‘I hope the money will help getting treatment for my daughter’s eyes.’ 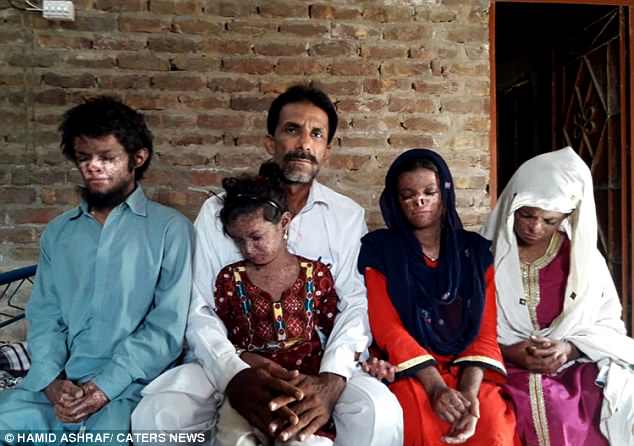 Father Hussain Bux is trying desperately to find a treatment for his children’s debilitating condition – he has spent all his savings and sold his house, and has raised nearly £1,000 on social media 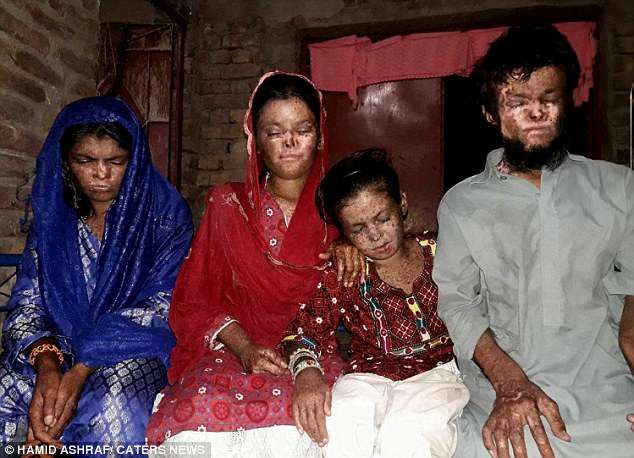 Because the skin of people with XP is so sensitive to UV rays, doctors told the family to keep the children out of the sun

Sufferers should cover their skin at all times

Xeroderma pigmentosum is a rare genetic disorder which causes the skin to become extremely sensitive to UV rays from sunlight.

People with the condition are more vulnerable than normal to sunburn, so need to keep their bodies covered at all times.

It also makes sufferers more susceptible to skin cancer, and can cause joint pain and cognitive problems. 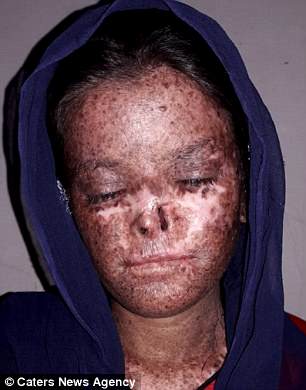 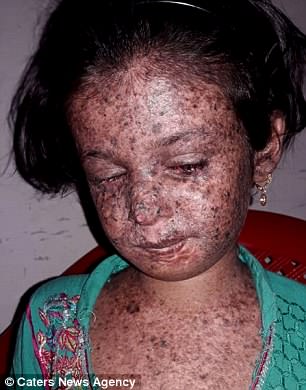 Sobia, 17, left, has lost part of her nose because of XP and her sister Aaliza, 9, right, has serious problems with her eyesight

Because the condition is rare it cannot always be diagnosed quickly – one woman in the US found out she had XP when she had already developed skin cancer by the age of 12.

Lizzie Tenney, 22, develops severe sunburn after the slightest sun exposure and has had to undergo skin-cancer surgery 43 times.

Despite suffering extreme symptoms since she was a baby, the rarity of XP meant doctors only identified Ms Tenney’s condition when she was 12 years old and went to a dermatologist with ‘sores’ that turned out to be skin cancer.

Ms Tenney, from Highland, Utah, is forced to wear a bee-keeper style hat every time she steps outside, has coated her house and car in special ‘sun cream’, and relies on a meter that measures the sun’s UV rays.