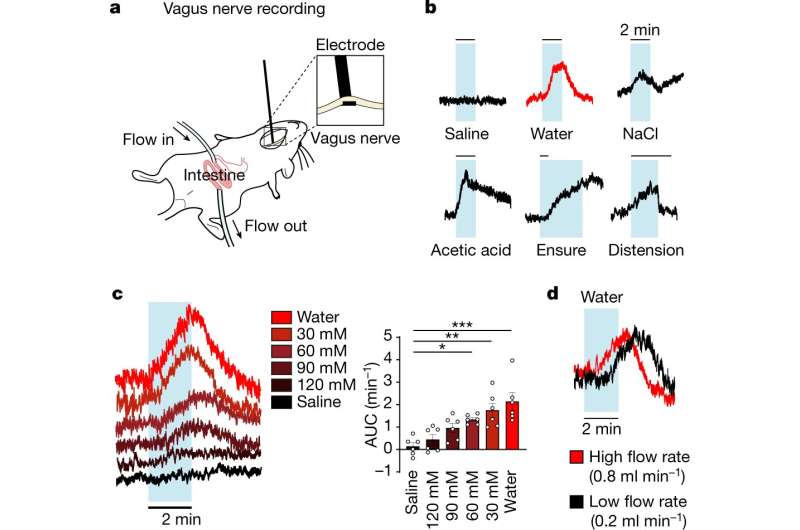 Drinking a glass of water is often sufficient to quench thirst after exercising. But while the sensation of thirst may be satiated after just a few minutes of drinking, the process of rehydration actually takes around half an hour. The delay occurs because the brain receives signals that you drank water before the body is fully rehydrated based on the detection and measurement of osmolality levels in the gut. Osmolality represents the concentration of dissolved materials including sodium and glucose.

The laboratory of Caltech biologist Yuki Oka has worked to learn more about the gut-to-brain osmolality signaling that regulates thirst, and now his team has discovered the major sensory pathway that mediates this process.

Blood has high osmolality when our bodies are dehydrated, which triggers the feeling of thirst. But because of the time delay between when we feel quenched and when the body is fully rehydrated, the gut must sense osmolality changes before they happen in the bloodstream, and it must send this information to the brain.

Once we ingest food and water, nutrients are absorbed from the intestine to the liver through the specialized blood vessel called the portal vein. During this absorption event, osmolality signals are also detected by sensory neurons in the gut. In the research, led by postdoctoral scholar Takako Ichiki and graduate student Tongtong Wang, the team examined how the gut communicates this information to the brain to indicate thirst or satiation.

There are two major sensory pathways from the gut to the brain: the spinal (dorsal root ganglia, or DRG) and vagal pathways. In this study, Ichiki used genetically engineered mice to visualize neural activation patterns in these two pathways. She then systematically monitored DRG and vagal neurons in response to infusions of water, salt, or sugar into the mouse intestine that mimic normal nutrient ingestion. The team found that the vagal neurons, but not spinal neurons, are strongly activated upon osmolality changes in the gut. In fact, distinct subsets of neurons were active in response to the different liquids.

The next question was: What part of the gut sends the osmolality information to the brain? The team examined the hepatic portal area (HPA), a major blood vessel running through the gut responsible for absorbing the vast majority of nutrients from the intestine and carrying them to the liver. They found that vagal nerves innervating the HPA indeed carry osmolality signals. Severing a specific vagal nerve branch to the HPA eliminated the ability of vagal neurons to respond to changes in osmolality.

“We have discovered the beginning of a pathway, the HPA-to-brain axis,” says Oka, who is also a New York Stem Cell Foundation Investigator. “The details of all of the connections and molecular mechanisms are still to be determined.”

Additional future research will examine the connections between the vagal neurons in the body and the regions of the brain known to control thirst. In previous work, Oka lab researchers identified so-called thirst neurons within the brain’s subfornical organ (SFO) region. When animals are thirsty, these neurons are highly active; drinking water rapidly calms them down. But the SFO thirst neurons are not directly connected to any gut neurons, so the team aims to figure out how changes in osmolality are communicated to the SFO thirst neurons.

“There is still so much that we don’t know about how the nervous system controls basic functions, like thirst and satiety,” says Karen David, Ph.D., program director at the National Institute of Neurological Disorders and Stroke. “This study shows how approaches supported by the BRAIN Initiative are being used to uncover how brain circuits handle this important sensory information.”