In a recent study posted to the medRxiv* preprint server, researchers reported coronavirus disease 2019 (COVID-19) prognosis worsened by the presence of cardiovascular diseases (CVDs) in pregnant and postpartum women.

The maternal mortality rate has multiple social and economic implications as the most sensitive healthcare marker. It is 59.1 per 100,000 live births in Brazil, higher than the World Health Organization’s (WHO) acceptable values. CVDs are among the major indirect causes of maternal mortality across the world. Moreover, maternal mortality rates have significantly increased during the COVID-19 pandemic. According to reports, CVDs are independent risk factors for severe COVID-19 in the general public, and studies regarding pregnant and postpartum women are lacking.

According to Brazilian regulations, all severe acute respiratory syndrome (SARS) cases must be notified to the influenza epidemiological surveillance information system (SIVEP-Gripe). SIVEP-Gripe is an open-access database established since the 2009 pandemic of Influenza A virus (H1N1) and contains patient-related data in an anonymized form. 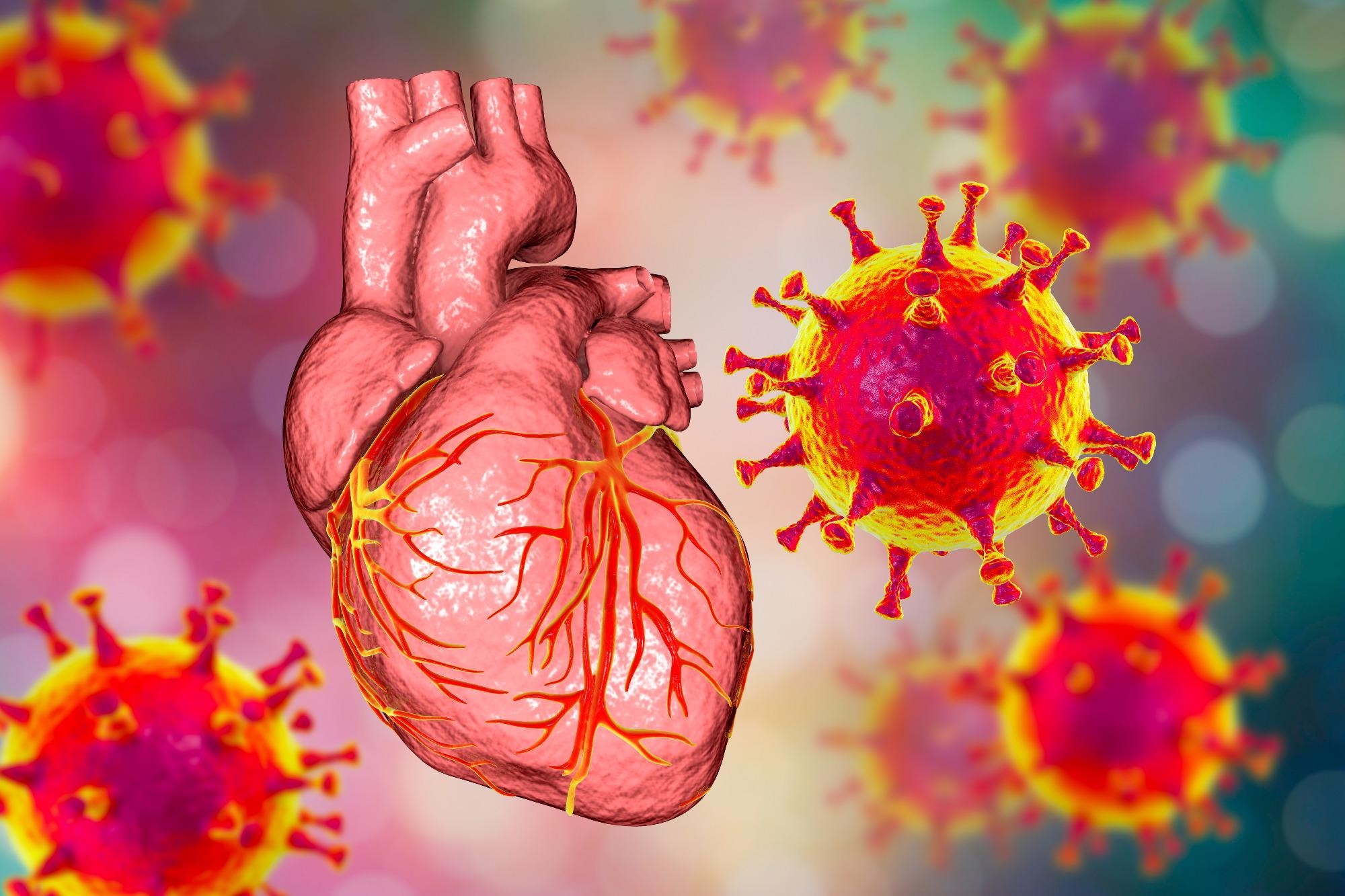 In the present study, researchers evaluated the CVD-associated characteristics in pregnant and postpartum patients hospitalized with COVID-19.

The SIVEP-Gripe data was explored to identify COVID-19 cases reported from week 8 of the epidemiological week of the year 2020 (corresponding to the onset of the COVID-19 pandemic in Brazil) to week 15 of 2021. Hospitalized SARS cases with confirmed COVID-19 diagnosis were identified, and pregnant or postpartum women having CVD-related data were selected for further analysis.

Based on the selection criteria, two types of patients were evaluated – those with or without CVDs. Categorical variables were compared between the two groups through the X2 test, and Yates and Fischer’s test were used to perform corrections whenever necessary. The odds ratio (OR) was calculated with a 95% confidence interval (CI). Propensity score matching (PSM) was performed to estimate and assess the observations’ balancing weights creating two balanced groups. Propensity score weights were made through the logistic regression method.

The authors found more than 1.8 million SARS-related cases in the initial period, and screening for pregnant and postpartum women identified 3,562 cases. Of these, nearly 17% (602) cases reported CVDs. In addition, patients in the CVD group were older than those in the non-CVD group, mostly (49.8%) over 35 years. 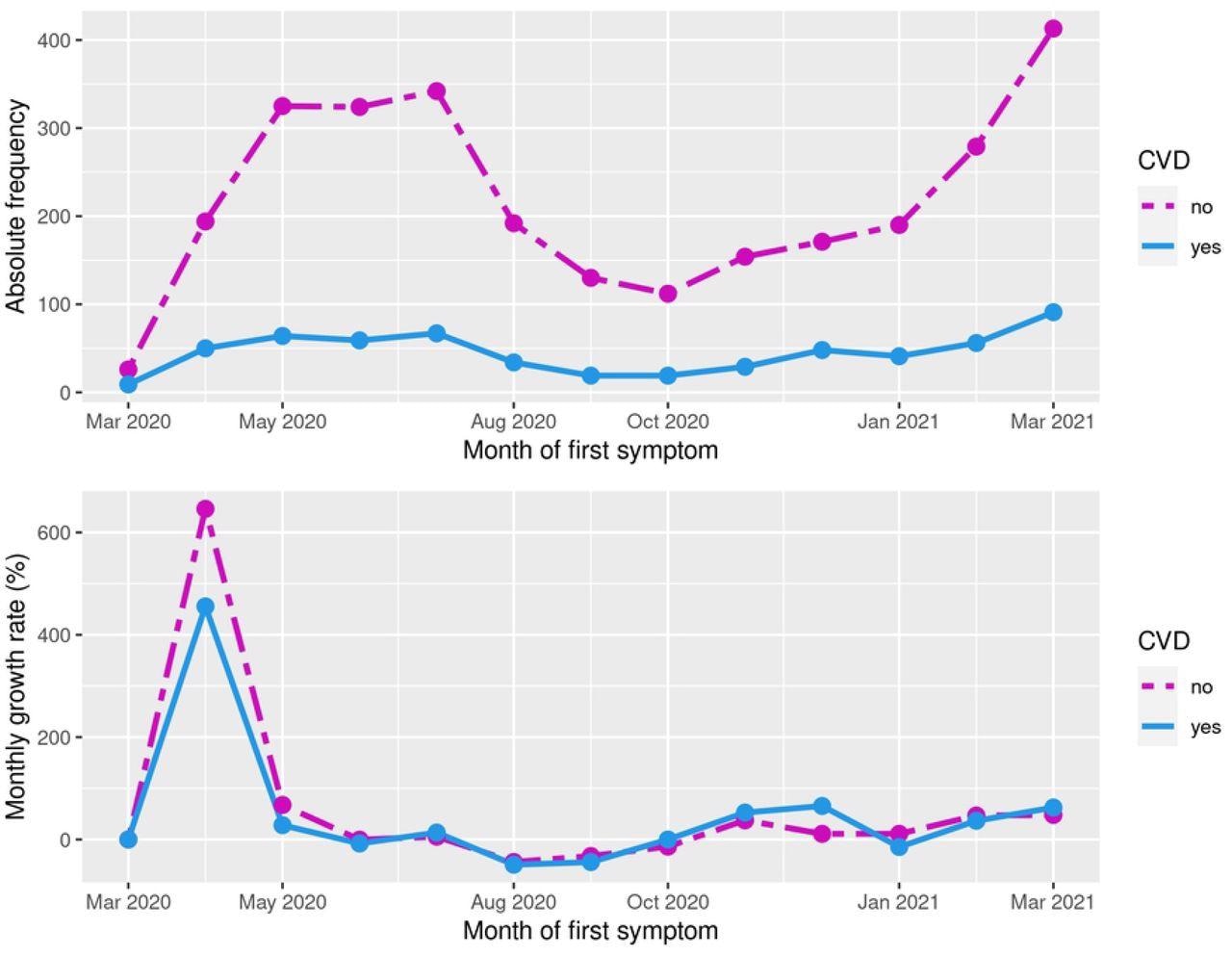 Absolute frequency and percentage of monthly growth rate of COVID-19 cases according to the month of the first symptom in the CVD and non-CVD groups.

The prevalence of comorbidities was higher in CVD patients, with 33.6% being diabetic in this group compared to 11.4% in the non-CVD patients. Similarly, neuropathy, pneumopathy, and obesity were more prevalent across CVD patients than non-CVD patients. The absolute number of COVID-19 cases increased in the two groups from March 2020 onwards and peaked in June 2020. However, the growth rate of COVID-19 patients with CVDs was lower than those without CVDs in the first wave of the pandemic. In contrast, those with CVDs were the most affected in the second COVID-19 wave.

The frequency of symptomatic cases was higher among patients with CVDs, and over 96% of them displayed at least one symptom. Systemic and respiratory symptoms were more in CVD patients than those without CVDs.

Post-PSM, the authors noted an increased risk of dyspnea, respiratory distress, and oxygen saturation < 95% in patients with CVDs. Further CVDs increased the risk for ICU admissions by 22%, with higher risk during the first and second trimesters and the postpartum period. 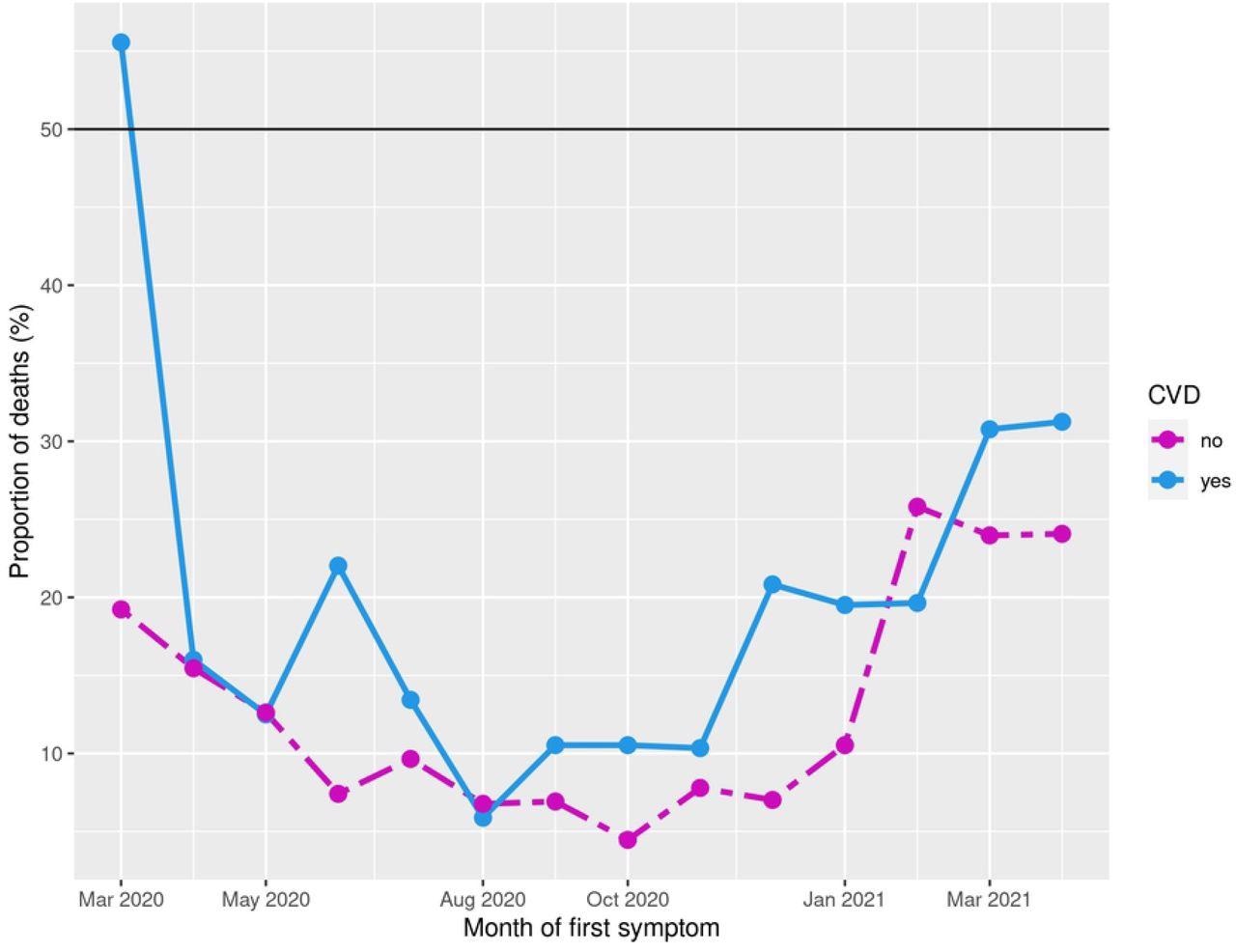 Percentage of mortality among patients with CVD, fixed the month of first symptom.

Patients in the CVD group required invasive and non-invasive ventilation more often than non-CVD patients. The need for orotracheal intubation increased in CVD patients during the third trimester. Across the two groups, positive outcome (cure) was higher in the non-CVD group with fewer deaths (13.5%) compared to CVD patients (18.9% deaths). Post-PSM, patients with CVDs had a 32% higher mortality risk, particularly during the second and third trimesters and puerperium periods.

The study findings demonstrated an increased risk of ICU admissions, ventilation requirements at all studied phases of the pregnancy-puerperal cycle, and orotracheal intubations in the third trimester in patients with CVDs. A majority of pregnant or puerperal patients with CVDs were symptomatic.

Notably, the cumulative mortality rate (of the two groups) was 14.4%, considerably higher than the general population. Moreover, the mortality risk in CVD patients was 32% higher than in non-CVD patients. The higher mortality could be attributed to the CVDs as they have been previously recognized as risk factors during pregnancy or puerperium. However, future studies are required to assess the associated risk factors to improve care and reduce the maternal mortality rate.

Tarun is a writer based in Hyderabad, India. He has a Master’s degree in Biotechnology from the University of Hyderabad and is enthusiastic about scientific research. He enjoys reading research papers and literature reviews and is passionate about writing.