Skip to content
HomeHealth NewsIs YOUR country prepared for an epidemic?

Is YOUR country prepared for a disease epidemic? Interactive map reveals only 14 per cent could cope, with Australia and South Korea at the top of the list

An interactive online map has revealed which countries are most – and least – prepared for a disease epidemic.

The Prevent Epidemics map shows Australia and South Korea are the best prepared countries in the world to handle a disease epidemic on their soil.

African countries Chad and Somalia, however, are most vulnerable to a contagious infection spreading through their populations.

After completing an evaluation process countries are rated on a scale of one to 100, and the higher the score, the safer a country is expected to be in the event of a disease outbreak.

Australia and South Korea both score 92, the US scores 87, while at the bottom of the heap, Chad and Somalia score just 29.

Experts say it is only a matter of time before another deadly disease outbreak, and ‘the world won’t be safe’ unless action is taken to prepare.

The map has been created with the help of former director of US health organisation the Centers for Disease Control and Prevention (CDC) and funding from Bill Gates.

Use the map below

The map has not yet assessed all countries – there is no rating for the UK – but its creators say nearly 100 countries will be mapped by the end of the year.

According to data so far, only 14 per cent of countries are prepared to tackle a disease epidemic.

Countries are judged on 19 measures of how prepared they are, which include the quality of their disease surveillance systems, their labs, and the country’s communication and co-ordination centres.

An epidemic occurs when a disease suddenly infects a large proportion of the population and is spread from person-to-person.

A recent example is the devastating Ebola virus outbreak in West Africa from 2014 to 2016, which was reported to have killed more than 11,000 people.

It can take just 36 hours for a disease to spread from a single community to any country in the world, experts say. 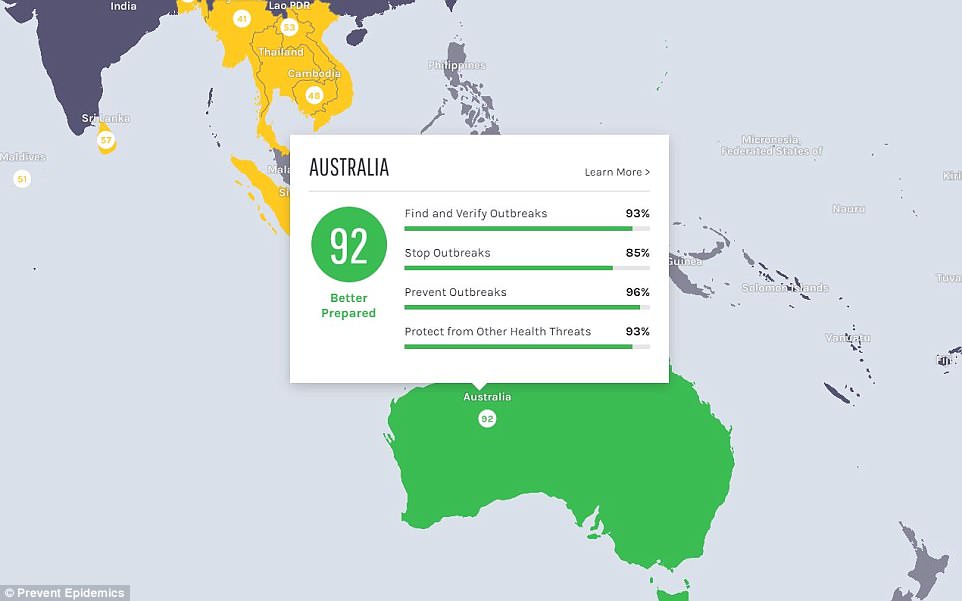 Australia and South Korea rank the highest in the Prevent Epidemics interactive map, which judges how able countries are to combat an epidemic disease outbreak 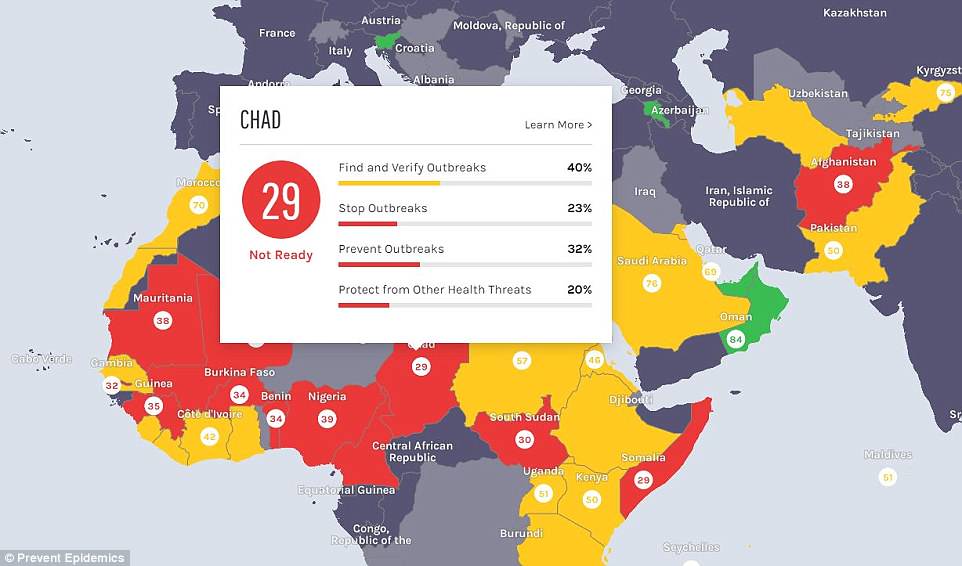 Dr Tom Frieden, the former director of the CDC, leads the global health organisation Resolve to Save Lives, which created the map and is part-funded by the Bill & Melinda Gates Foundation.

A global disease epidemic is not a matter of ‘if’, but of ‘when’

He said: ‘It’s not a matter of if there will be another global epidemic, but when. It’s time for the global community and countries to step up and improve preparedness.

‘By the end of this year, nearly 100 countries will have completed a rigorous, transparent assessment of how prepared they are for an epidemic – but there has been too little support from the global community and countries to close life-threatening gaps.’

The interactive map, which is the first of its kind, scores countries out of 100: 80 or above signals a country is better prepared to cope with an epidemic.

WHICH COUNTRIES ARE MOST AND LEAST PREPARED FOR A DISEASE EPIDEMIC? (SCORED OUT OF 100)

A score of between 40 and 79 means the country has work to do, and countries with 39 or below are not ready.

Of the 65 countries which have been evaluated so far, only nine of them (14 per cent) have scored above 80.

Experts say the information in the map will help countries realised where they are falling short, to improve their preparations.

‘The world won’t be safe until we step up’

Amanda McLelland, who was part of the response to the 2014 Ebola epidemic said: ‘The world won’t be safe until we step up by mobilizing and effectively using global, country, and local resources – including money and trained, supported public health staff.

‘How can we prevent a child in Ukraine from contracting measles, or a nurse in Sub-Saharan Africa from getting Ebola?

‘Our website not only communicates the risk that epidemics will not be effectively managed at the country level, but, most importantly, encourages action to reduce these risks.’

Ongoing Ebola outbreak in the Congo

A current outbreak of Ebola is ongoing in the Democratic Republic of the Congo, which has killed at least 28 people. Although the situation has settled, the head of the World Health Organisation says it is not over.

Dr Tedros Adhanom admitted the situation in the African nation has ‘stabilised’ – but claimed cases of the deadly virus could easily spark up again.

His comments come after WHO figures revealed earlier this month that new cases of Ebola are appearing, despite efforts to contain it.

Officials in the country branded the outbreak a ‘public health emergency’ when it was first declared in April. All neighbouring countries remain on high alert.

But international help quickly flooded in to dampen the potential spread of Ebola – considered one of the most lethal viruses in existence.

Virologists feared the new outbreak was ‘reminiscent’ of the 2014 Ebola pandemic, which decimated West Africa and killed more than 11,000 people.

WHAT IS EBOLA AND HOW DEADLY IS IT?

That pandemic was officially declared over back in January 2016, when Liberia was announced to be Ebola-free by the WHO.