Kids who drink orange juice in the morning ‘have a higher obesity risk’ while skipping breakfast makes them more likely to snack later, study finds 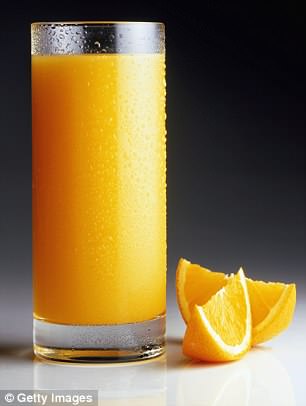 Children who drink fruit juice at breakfast are more likely to be obese, a Vienna study found

Parents should stop giving their children fruit juice at breakfast because it significantly increases their chances of being overweight or obese, a study has found.

Those who drank a glass in the morning were one-and-a-half times more likely to be overweight than those who did not.

Skipping breakfast was also linked to weight gain as it made children more likely to snack during the day, according to researchers.

Though fruit juices are frequently marketed as a healthy choice, they are often high in sugar and calories.

Previous research has shown a 350ml glass can contain up to nine teaspoons of sugar and is not as nutritious as unprocessed fruit.

The study, led by the Medical University of Vienna, looked at the breakfast habits of 650 children and compared them to their weight and height.

Some 29 per cent were classed as overweight or obese on the body mass index.

Those who drank water at breakfast were 40 per cent less likely to be overweight, it found. 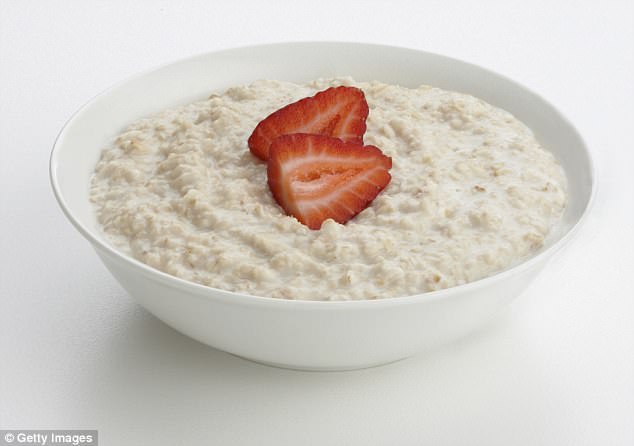 Only four in ten children under the age of 13 ate breakfast every day, with around a third eating it fewer than five times a week and a similar proportion skipping it.

The study found that those who did eat breakfast were three pounds lighter on average than those who skipped it.

She said: ‘It’s very important to get a lot of fibre. So eat an apple or an orange instead of drinking fruit juice.

Drink water or unsweetened tea and, if you drink fruit juice, add water.’

Nearly half a million under-11s are now obese. Experts have warned this will result in higher rates of Type 2 diabetes, heart disease and cancer in the decades to come.

Public Health England recently found that children are eating three times too much sugar – half of which comes from unhealthy snacks and sugary drinks.

Jason Halford, of the European Association for the Study of Obesity, said: ‘Fruit juice is not entirely bad but in terms of appetite it is not as filling as whole fruit and has the fibre removed and consequently [it is] a concentrated form of sugar.’

Nose plugs that disable our sense of smell can double weight loss in dieters, researchers say.

Those who are overweight tend to be more sensitive to food smells which then stimulate their appetite.

The device, which fits into both nostrils, suppresses this by directing air to bypass scent receptors.

In a trial of obese adults aiming to lose weight, those who used the silicone inserts lost twice as much as other slimmers.

Over three months those who blocked their nose lost 1st 4lb on average – compared with more than 9lb for those who did not.

He said the device – which costs £67 for a month’s supply – could be used before other methods such as stomach stapling or gastric band surgery.

Manufacturer Adva Beck said: ‘We are optimistic this can be one of the solutions to obesity.’