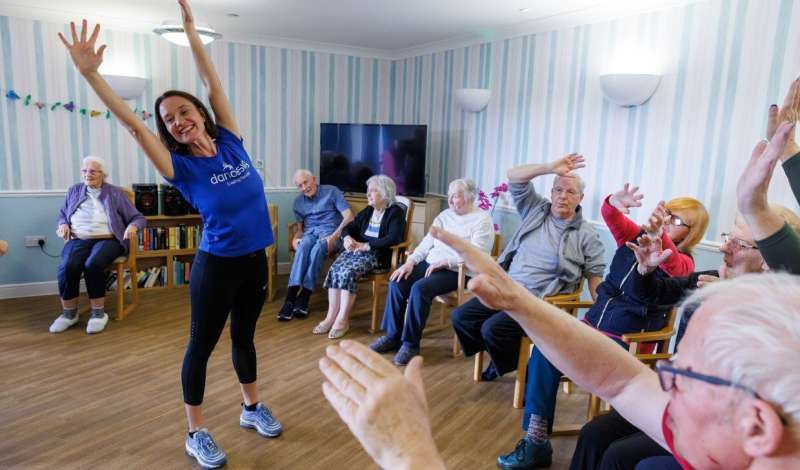 A pilot study by the University of Stirling has found that music and movement can have a positive impact on the health and well-being of care home residents—and could lead to similar activities being rolled out on a wider scale.

The study, conducted by researchers from the Faculty of Health Sciences and Sport, in partnership with well-being, arts and fitness company danceSing Care, followed 47 residents from 10 Balhousie Care Group homes across Scotland over a period of 12 weeks as they evoked memories and improved their mental, emotional and physical well-being.

Residents and caregivers got their toes tapping, hands clapping and voices singing as they enjoyed digital music and movement resources created by the danceSing Care team in consultation with NHS healthcare professionals.

Over the study period, residents joined the online danceSing Care sessions four times per week, where they were encouraged to take part in a variety of fun and meaningful activities including everything from chair and standing fitness, music and singing, bespoke Memory Lane radio shows, and musical concerts.

The sessions proved increasingly popular as the weeks went on, and a range of benefits and improvements to residents’ well-being have been reported.

Academics looked at a number of aspects of participants’ health and well-being, spanning anxiety and depression, stress and loneliness, sleep satisfaction, and indications of frailty such as appetite and unintentional weight loss. The study showed improvements in a number of areas.

Balhousie Care Group also reported that the collective mood of the residents was visibly improved during the sessions. Even those participants who were demotivated at the beginning were visibly happier by the end of the session, or those not actively taking part still enjoyed the benefits of being present while the session took place.

The numerous benefits and joy from the danceSing Care sessions were exemplified in moments such as one resident, after being hospitalized, returning to the home and immediately asking to take part in a danceSing Care session. As the program progressed, residents waited in the lounge for the sessions to start, showing enthusiasm and excitement.

It was noted that residents participated more in each movement session as the weeks went on, with visible improvements in physical strength. Staff members commented that the success of the program was visible in the residents’ “eyes, smiles and more smiles,” and one resident described the mood-boosting music sessions as being “good for the soul.”

The study also identified challenges to delivering the program, such as staff time and availability of suitable technology, so solutions to these can be incorporated into any future activity.

One resident who particularly felt the sessions had a positive impact on their health and well-being was 79-year-old Robert Wilson, a resident at Balhousie Coupar Angus Care Home.

Robert has always enjoyed an active lifestyle, being a former gym member who did Tai Chi, swimming, and used weight machines. He found that the danceSing Care sessions helped to keep him active and social.

Robert said, ” I very much enjoyed taking part in danceSing Care exercise and music sessions. I think I’ve benefited a lot from taking part in the program as the sessions have kept me active and helped to improve my well-being and even my fitness.

“I enjoyed the fitness part of it the most and have become familiar with the moves as they were easy to follow. I love music and found the music part of the program very enjoyable too.”

Bonds have been strengthened even more between staff and residents, with the program encouraging increased interaction between the two groups. Residents with dementia were also noted as being “calm”, “content” and in a “happy place”, which in turn had a positive impact on staff well-being.

Professor Anna Whittaker, the study lead from the University’s Faculty of Health Sciences and Sport says that “the early results of the study are extremely promising in terms of the positive impact that music and movement can have on care home residents and staff alike. Giving residents something to look forward to and a chance to engage with one another has visibly improved their quality of life, which is exactly what we were hoping for.”

“Such good results at this stage are really promising for the future, and we hope this type of program could be implemented in care homes across the country before too long. We did also identify some challenges to delivering the program in care homes which we will address in our future research.”

Karen Johnson, quality director at Balhousie Care Group, says that “as a care home operator we see first hand the benefits of music and exercise to our residents. However, to have this tracked, documented and researched to such an extent is valuable both to us and the whole social care sector. Our homes thoroughly enjoyed being part of this pilot project and feasibility study, and we hope to see such programs extended to more care homes across the country.”

Natalie Garry, from danceSing Care, says that “the danceSing Care experience has been developed not just for people in care themselves, but for the caregivers too. It can create solid change and help create a happy vibrant community with a core of well-being and improving fitness.”

“We know anecdotally that our music and movement resources positively impact mental health, emotional well-being, physical condition, and improved socialization and were excited to team up with academics from the University of Stirling and Balhousie Care Group to prove this. Even with the restrictions of COVID, we’ve been able to launch this important research project which will positively impact the provision of music and movement resources for older people.”

The success of the novel pilot project highlights the possibility of similar activities being adapted and rolled out across the country into the future, with further studies underway and in planning.