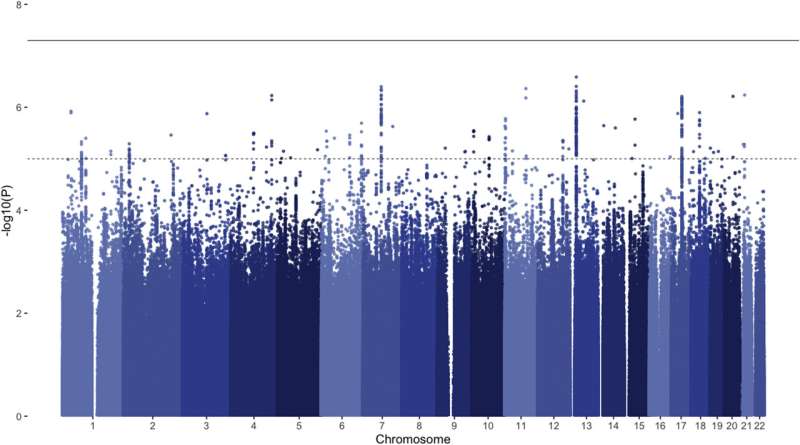 Hereditary factors are partly responsible for childhood anxiety and depression that persists into adulthood, according to University of Queensland researchers.

In the largest study of its kind in the world, the genetics of 64,641 children, aged between 3 and 18 years, were analyzed using longitudinal data from the Early Genetics and Lifeforce Epidemiology consortium.

Professor Christel Middeldorp, who holds a co-joint appointment with the UQ Child Health Research Centre and Children’s Health Queensland, said the study showed children who had similar levels of anxiety and depression were also alike genetically.

“It also revealed a genetic overlap between childhood and adult mental health disorders when comparing the results in this childhood study with results of previous studies in adults.

“These findings are important because they help identify people most at risk of symptoms continuing across the lifespan, so intense treatment can be provided where needed,” Professor Middeldorp said.

It’s the first time researchers have conducted such a large scale study examining the role of genetics in repeated measures of anxiety and depression in children.

Professor Middeldorp said genetic variants needed to be investigated because they increased the risk of recurrence and co-occurrence with other disorders.

“Mental health symptoms often come together, so those who experience anxiety or depression have a greater risk of disorders such as ADHD, aggressive behavior,” she said.

“We found that this co-occurrence is also due to genetic variants” Professor Middeldorp said.

Genetics account for around 40% of a person’s risk of suffering anxiety and depression, with environmental factors accounting for the rest.

Professor Middeldorp said while everyone could feel anxious or depressed from time to time, some people were better able to adjust to life’s circumstances.

“People with an anxiety disorder ruminate about their situation, preventing them from moving on,” she said. “There is a difference in how people respond to stressors, and part of that difference is genetic.”

Researchers will now analyze the interplay of genetics and environmental variables, such as school and family life, to see how together they influence childhood anxiety and depression.