How your daily coffee habit boosts your health: The body-benefits of drinking coffee from one cup a day to six

A strong cup of coffee may be an essential start to your day, but the benefits could go beyond just that pick-me-up effect.

Research suggests coffee drinkers are less at risk of a number of serious conditions such as type 2 diabetes, fatty liver disease and some cancers.

And results from a recently published ten-year study show moderate coffee consumption is linked with a lower risk of cardiovascular disease and early death from any cause.

While the benefits are associated mainly with ground coffee, there are also some for instant, too. As well as caffeine, coffee — including instant — contains minerals, notably magnesium (for healthy bones and muscle function), potassium (which plays a role in blood pressure) and vitamin B3 (needed for releasing energy from food and a healthy nervous system).

What about the risks? Some studies have linked coffee with increased cholesterol. But this may have been down to the way the beverage was prepared. 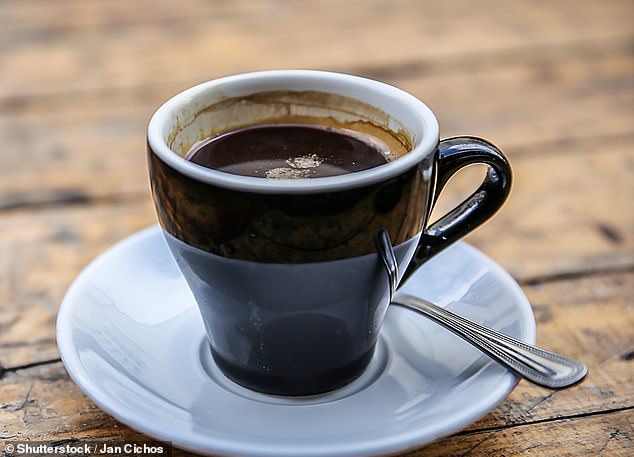 Research suggests coffee drinkers are less at risk of a number of serious conditions such as type 2 diabetes, fatty liver disease and some cancers

‘Much of the research focused on a type of boiled, unfiltered coffee popular in Scandinavia and Turkey.’ explains dietitian Helen Bond.

Boiled coffee contains natural oils called cafestol and kahweol that can mildly stimulate cholesterol production, while we tend to drink filtered and instant. What about the idea that caffeine is bad for hearts because of its ‘stimulant’ effect?

In fact, a recent study found each additional daily cup of coffee was associated with a 3 per cent lower risk of any heart rhythm problem occurring, reported the journal JAMA Internal Medicine.

But you can still have too much of it. The European Food Safety Agency says a daily intake of 400mg caffeine, equal to four cups of coffee, is fine for most adults.

But individual sensitivity to caffeine varies. Some people can tolerate six or more cups a day very well, and others feel jittery after one or two.

Pregnant women are advised to stick to 200mg caffeine a day (around two cups of filtered coffee), according to the NHS, as excessive caffeine has been linked with low birth weight (possibly as it affects blood flow to the placenta).

Here, from one cup to six, are the health benefits to justify your daily coffee habit.

The 100mg or so of caffeine in one cup of strong coffee boosts alertness by temporarily blocking the action of adenosine, a chemical that signals to the body to become drowsy.

‘The two chemicals have similar molecular structures and caffeine can block the adenosine receptor,’ says Helen Bond. And the effect of this is to perk you up.

In a 2012 study published in the journal Psychopharmacology, a single cup of coffee half-way through a four-hour session of simulated motorway driving helped drivers feel less tired, cut the amount they wove around on the road and helped them keep to a more consistent speed. 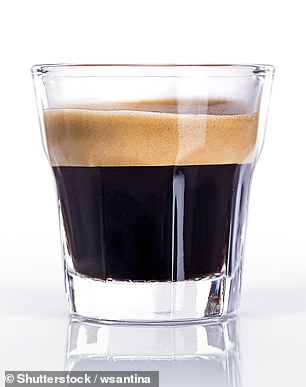 In a 2012 study published in the journal Psychopharmacology, a single cup of coffee half-way through a four-hour session of simulated motorway driving helped drivers feel less tired, cut the amount they wove around on the road and helped them keep to a more consistent speed

One cup of coffee can also stimulate the bowel. In a key 1990 study in the journal Gut, 29 per cent of coffee drinkers said their morning coffee gave them the urge to go to the loo — and indeed their bowel activity reflected this, with both regular and decaffeinated coffee causing contractions in the lower bowel within four minutes.

One theory is caffeine and other chemicals in coffee stimulate the release of digestive hormones that then stimulate gut contractions.

Interestingly, drinking one coffee consistently every day has been linked to a healthier gut microbiome, with more anti-inflammatory bacterial species.

‘Filtered coffee is a good source of a beneficial plant compound called chlorogenic acid,’ explains Helen Bond. ‘This acts as a prebiotic [food] for our gut microbes, helping them thrive and produce beneficial substances for our health, such as short chain fatty acids [linked to mood].’

A couple of strong cups of coffee can boost exercise performance, according to the International Society of Sports Nutrition in the U.S.

Researchers found the amount needed to help improve endurance and speed, as well as performance in sports with intermittent sprints such as football, is 3mg to 6mg caffeine per kg body weight — that’s a minimum of 195mg (about two coffees) for someone weighing 65kg (10 st 3 lb).

Its stimulant effect on the nervous system reduces fatigue and the perception of effort.

Drinking two cups of coffee (standard, not decaf) a day may also lower the risk of heart failure, where the heart is unable to pump blood efficiently around the body.

One cup made no difference, but people drinking two or more cups a day had a 30 per cent reduction in heart failure risk, according to a study last year by the University of Colorado — possibly because of caffeine’s effect on insulin sensitivity (i.e., how well our bodies remove sugar from the blood) and the body’s water balance.

Health effect: May lower chance of stroke and Parkinson’s

Research published in January in the European Journal of Preventive Cardiology, involving nearly half a million Britons, found that drinking around three cups of ground coffee daily reduces the risk of stroke by 21 per cent, compared with coffee abstainers.

It’s thought antioxidants and other compounds in the beans are key, protecting against damage to the arteries, which can lead to heart problems and stroke.

The caffeine in coffee may also help prevent and manage Parkinson’s disease, by helping to maintain levels of dopamine — the brain chemical involved in controlling movement which is depleted in the disease.

A 2014 study from Shandong University and Qingdao University, both in China, found the protective effect of coffee against Parkinson’s peaked (at 28 per cent lower risk) at around three cups a day.

A study last year found people who drink three to four cups of coffee a day had a 19 per cent reduced risk of developing non-alcoholic fatty liver disease, where fat builds up in the liver, and can cause serious damage: one in three Britons is thought to be affected by this diet and lifestyle-related disease.

The research, from Southampton and Edinburgh universities, found three to four daily cups was also linked to a 21 per cent lower risk of developing liver cancer.

All coffee was beneficial but ground coffee was slightly more so. This may be due to the anti-inflammatory effects of coffee. And in people with liver disease already, a chemical called paraxanthine (produced when caffeine is metabolised in the liver) slows formation of scar tissue in the organ.

Helen Bond says four cups of coffee a day has surprising nutritional benefits. ‘This amount of medium-strength black coffee can provide up to 1150mg potassium — more than half the daily recommended amount and more potassium than four small bananas.

‘It would also provide 100mg of magnesium — around a quarter of the recommended daily intake — and 9mg niacin, more than half of daily recommended intake.’

Instant coffee also gives these nutrients, but in smaller amounts (possibly because some nutrients are removed during processing).

A study of more than a million people by the Karolinska Institute in Sweden found those who drank five cups per day had a 29 per cent lower risk of type 2 diabetes, compared with non-drinkers.

Caffeic acid and chlorogenic acids are two compounds in the coffee bean that may help prevent the deposits of a protein, amyloid polypeptide, that can collect in the pancreas and destroy the cells that produce insulin. Decaf coffee can have the same protective effect, the study suggested.

The highest coffee intakes are linked with the lowest chance of developing gout — caused by a build-up of a waste product called uric acid in the joints — according to data from the Health Physicians Follow-Up study, published by Boston University.

Caffeinated coffee had the strongest effect but decaf was still beneficial, leading researchers to suggest components such as chlorogenic acid may work to lower blood levels of uric acid.

Similar results have been found in women by the same researchers; four cups of regular coffee daily was linked to a 57 per cent reduced risk of gout.