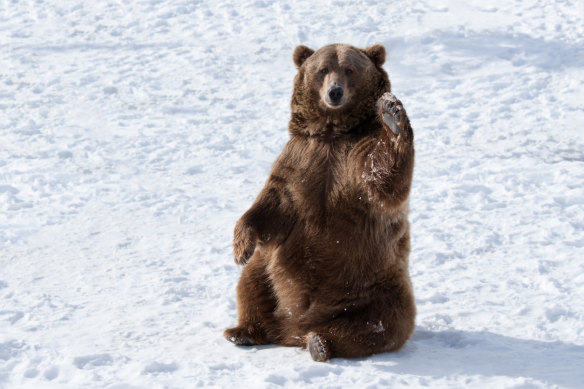 During hibernation, bears remain healthy under conditions that would weaken and sicken mere humans.Credit:iStock

But for many scientists, the true fascination of Fat Bear Week involves what happens next, when the now beachball-shaped bruins, carrying about 40 per cent body fat, lumber into their dens and start hibernating. During hibernation, they remain healthy under conditions that would weaken and sicken mere humans. The bears emerge months later, lean, strong and barely affected by their months of starvation and inactivity.

Until recently, researchers could not explain how. But several fascinating new molecular studies suggest hibernation remodels bear metabolisms and gene activity in unique and dramatic ways that could have relevance for people. The fat bears can advance our understanding of diabetes, muscle atrophy, inactivity and the ingenuity of evolution.

Superficially, hibernating bears seem passive and inert. For five months or more, they do not eat, drink, urinate, defecate or move, except occasionally to turn over or shiver. Their metabolisms drop by about 75 per cent. Hearts beat and lungs inflate only a few times a minute. Kidneys shut down. The bears grow profoundly insulin resistant.

If this were us, we would shed much of our muscle mass because of inactivity and probably develop diabetes, heart disease, kidney failure, frailty and other ills.

But the bears maintain their muscle and rapidly reestablish normal, healthy insulin sensitivity and organ function after hibernation.

“Hibernation is so much more complicated and nuanced than we once thought,” said Joanna Kelley, a biology professor at Washington State University, who studies grizzly bears at the WSU Bear Centre.

That bears can reverse their insulin resistance, hold onto their muscle and gain and drop such massive amounts of weight season after season with no obvious ill effects, “is pretty remarkable,” said Heiko Jansen, a professor of integrative physiology and neuroscience at Washington State University, who is also affiliated with the bear centre.

To learn how the bears manage this, he, Kelley and other researchers at Washington University and elsewhere have been drawing blood and taking minute tissue samples from bears throughout the year. (The resident WSU animals are trained and cooperative and do not need to be repeatedly anaesthetised for these procedures, Jansen said.)

Bear fat changes for the season

By comparing the samples, they concluded hibernation is biologically uncanny but hardly quiet. In a 2019 study, the WSU scientists and others found more than 10,000 genes in bears that work differently during hibernation vs. in autumn or spring. Many involve insulin activity and energy expenditure and most occur in the animals’ fat, which becomes quite insulin resistant during hibernation and robustly insulin sensitive immediately afterward.

Digging deeper into that process for a new study, published in September in iScience, they bathed fat cells drawn from hibernating and active bears with blood serum taken during the opposing time and watched the fat switch seasons. Fat from hibernating bears became insulin sensitive and genetically similar to fat from the active season and vice versa.

Perhaps most compelling, they also identified and cross-matched hundreds of proteins in the animals’ blood and found eight that differed substantially in abundance from one season to the next. These eight proteins seemed to be driving most of the genetic and metabolic changes in the fat.

Potentially, these same eight proteins, which also appear in human blood, might at some point be harnessed pharmaceutically to improve insulin sensitivity or treat diabetes and other metabolic disorders in people, Kelley said. But that possibility lies far in the future and requires vastly more research with bears and us (although perhaps not in close proximity).

The secret of bear muscles

Scientists likewise have been delving into the muscles of hibernating bears. In humans, prolonged inactivity triggers the release of multiple biochemicals that break down and reduce muscle, presumably because our bodies consider unused tissue dispensable. But bears hold on to their muscle through months of not moving.

Their secret seems to lie, again, in substances flowing through their blood. In a study published earlier this year, researchers in Japan soaked human muscle cells with blood serum from either hibernating or active Japanese black bears, or – as a control – from horses, and tracked the cells’ responses.

The serum from active bears and horses had little effect. But human muscle cells marinating in hibernators’ blood produced far less of a substance known to break down muscle and far more of other substances that sustain muscle growth. The cells also wound up with higher overall amounts of protein, the building block of tissue, compared with levels before the serum.

These processes should keep the muscles in a fine-tuned balance between breakdown and rebuilding, said Mitsunori Miyazaki, a professor of biomedical and health sciences at Hiroshima University, who led the new study. In that case, muscles, even if inactive, would not grow but also would not shrink.

The ultimate aim of this research, Miyazaki said, is to isolate and refine all of the substances and processes in hibernating bears’ blood and elsewhere in their bodies that protect them from muscle wasting, with the hope that these same elements might treat atrophy from bed rest or ageing in people.

“There is probably no better way to maintain a healthy lifestyle than through physical exercise,” he said, but for people who cannot be active, for whatever reason, the internal operations of slumbering bears might someday provide respite from frailty.

“What’s so interesting about this work is that evolution already figured out how to handle” the problems of reversing insulin resistance and sparing nonworking muscles during hibernation, Jansen said.

Now he and other bear scientists just need to continue reverse-engineering that evolution, he said, to help us better understand and eventually benefit from the resilience, as well as the charisma, of fat bears.

Make the most of your health, relationships, fitness and nutrition with our Live Well newsletter. Get it in your inbox every Monday.

Most Viewed in Lifestyle