Cyclin-dependent kinases are a type of serine/threonine kinase which are activated by cyclins to drive the progress of the cell cycle.

The cell cycle is a comprised of 4 stages, which are tightly controlled to ensure accurate replication of DNA and formation of daughter cells. Each of these stages is accompanied by an increase in a specific type of cyclin. 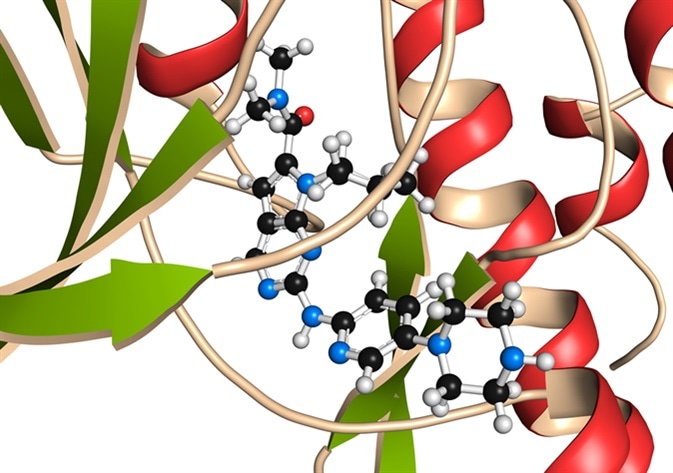 These cyclins oscillate, increasing and decreasing at different stages, binding to CDKs and driving the cell cycle forward. The differences at each stage are due to a balance between the gene expression of each cyclin and the ubiquitin-proteasome system which breaks them down.

Cyclin dependent kinases are present at constant levels throughout the cell cycle, but are only active in the presence of cyclins. Once bound to a cyclin they act to phosphorylate many target proteins on serine or threonine amino acid residues. This phosphate group acts to either inhibit or activate the target protein, functioning to drive the cell cycle forward.

There have been shown to be 12 different CDK genes, but only 5 are used to control the cell cycle. These are CDK-1, CDK-2, CDK-3, CDK-4, and CDK-6. Each interacts with a different cyclin at a different phase, stimulating various target proteins and ensuring that vital stages of each phase are carried out before a cell moves onto the next phase.

Initially, a mitogenic stimulus leads to the upregulation of cyclin D gene expression, which binds to CDK4. Retinoblastoma protein (Rb) usually functions to inhibit the transcription factor E2F, however, when cyclin-D-CDK4 phosphorylates the Rb protein, this relinquishes inhibition of E2F and leads to the production of genes required for entering the S phase.

Early work in the 1980s on CDKs was carried out using genetic and biochemical testing in yeast, which revealed that CDKs act to control progression of the cell cycle. They also showed that they were only active with the presence of cyclins.

CDC28 was identified in Saccharomyces cerevisiae, which bound to cyclins and drove the cell through the various transitions of the cell cycle. In contrast to mammalian cells, these yeast cells had only one CDK which interacted with various cyclins.

Upon external signals, CDK inhibitors can be used to block the CDK kinase activity, thereby preventing the cell cycle from being driven forward. These include the INK4 family and the CIP/KIP family. In addition to cyclin levels, this provides and additional way to control the activity of CDKs.

Since CDKS drive the cell cycle forward, CDK inhibitors have been suggested as a possible treatment for cancer. There are numerous clinical trials currently underway which aim to test the success of using these inhibitors to prevent cellular replication in cancerous cells. However, since CDKs are required for driving the cell cycle in non-cancerous tissues, these drugs need to be designed to be selective for cancerous cells only.

Hannah is a medical and life sciences writer with a Master of Science (M.Sc.) degree from Lancaster University, UK. Before becoming a writer, Hannah's research focussed on the discovery of biomarkers for Alzheimer's and Parkinson's disease. She also worked to further elucidate the biological pathways involved in these diseases. Outside of her work, Hannah enjoys swimming, taking her dog for a walk and travelling the world.