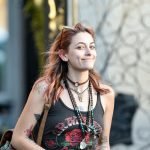 Paris Jackson has had nearly every hair color in the book, from blonde to unicorn colors to peach. She almost always gets her hair done by Nine Zero One Salon's Riawna Capri, a hair color genius who just transformed her look yet again. That's right — as of Saturday, Jackson can be seen sporting a
Read More

The Jackson family is scared after Paris posted a video of herself walking on the ledge of a building, the report claims. Paris Jackson could be headed for serious trouble, family members reportedly fear, after a series of bizarre incidents for the young model. Family of Michael Jackson’s daughter have grown alarmed after she posted
Read More
Health Problems