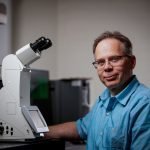 Sixty million people in sub-Saharan Africa live at risk of African sleeping sickness, a disease caused by parasites transmitted through the tsetse fly. In the late stage of the disease, when the parasite crosses the blood-brain barrier, the results are oftentimes fatal. Brigham Young University chemistry professor Ken Christensen, students and collaborators at Clemson University
Read More
Health Problems