Tangle-free tech in the form of wireless earbuds is hyped as one of the best, if easiest to lose, tech gifts to give this Christmas.

Many on the market – and it’s no longer just Apple and their airpods dominating, but every brand from Bose to Beats, Jabre to JBL, Samsung and Sennheiser – come in kid-friendly colours, but are earbuds friendly to anyone's health? 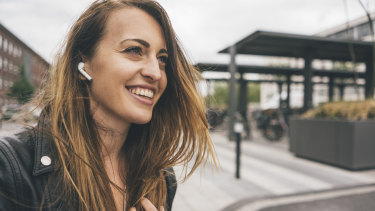 There is still concern about the health effects of wireless earbuds despite assurances from scientists.Credit:Getty

The jury, it seems, is out.

As advances in technology have surpassed the ability of research to keep up, there has been widespread concern expressed by scientists and parents alike.

Specifically, people are worried about the possible brain effects, from having the buds sitting inside the ear, of radio-frequency (RF) waves, a type of electromagnetic field (EMF). There is an even greater concern for children, with their developing brains and thinner skulls.

Earlier this year, Joel M. Moskowitz, the director of the Centre for Family and Community Health at the University of California, Berkeley, argued that the concerns were valid because there is a lack of long-term evidence that they are safe along with some research that suggests they aren’t safe. He has also argued that “very much like tobacco back in the 1950s”, the industry has too much influence and fund studies showing no impact.

Advances in technology have surpassed the ability of research to keep up, there has been concern expressed by scientists and parents alike.

Moskowitz is not the only one. As of September 2019, a petition signed by 250 scientists from 42 countries, including Australia, appealed to the WHO to address their concerns about exposure to the EMFs emitted from wireless devices. Among their concerns were that EMFs are a “possible human carcinogen”, increase the risk of tumours and that international regulations about exposure are inadequate.

Ken Karipidis is the assistant director of The Australian Radiation Protection and Nuclear Safety Agency (ARPANSA's) Assessment and Advice Section.

He points out that many of the scientists who express concerns “aren’t experts in this field”.

“The reason for this is, when you’re using a mobile phone, the radio wave has to travel to the closest mobile phone base station which could be one or two kilometres away,” he says. “Whereas with [buds] it only has to operate over a small distance, between the earpiece and the phone, which you’re normally holding, so the exposure levels are lower than if you were holding a mobile phone against your head.”

And as far as the impact of holding a mobile phone against your head, Karipidis says that the few studies that have found a positive association are the result of recall bias among those diagnosed with tumours.

“If you’ve got a brain tumour you really want to find out what caused that brain tumour,” he says.

Karipidis was involved with a study published in 2018 in the BMJ, which looked at rates of brain tumours in Australia between the late 1980s (when people started using mobile phones) and 2013.

“We found rates of brain tumour haven’t increased even though mobile phone use has gone up,” he says adding that cancer has a latency period.

“So for example, with smoking and lung cancer, from the time you smoke, you’re not going to get lung cancer till later on. The point being we’ve been using mobile phones for quite a while now … if there was an association, you would expect to see increases in brain tumours now from people who were using their mobile phone back in the 2000s and you just don’t see that.”

He adds: “Exposure from mobile phones is a lot greater than from pods.”

One current limitation is the lack of research into the impact of lifelong exposure. The World Health Organization is undertaking a health risk assessment of radiofrequency electromagnetic field.

Their current stance is that there is “no obvious adverse effect” low-level exposure to non-ionising electromagnetic radiation, which is the type we are exposed to with wireless earbuds, but that “gaps in knowledge” remain and require further research. These gaps include “less obvious” health effects as well as the exposure to low levels over a lifetime, particularly when children are using these devices from younger and younger ages.

“That concern is valid,” Karipidis says.

ARPANSA recommends limiting the time children have mobile phones up against their ears.

“We have that advice because we don’t have enough studies at the moment,” he explains. “With mobile phones against the head the exposure is much greater so I wouldn’t give the same advice on the pods because they’re really low powered, much lower than a mobile phone.”

Still Karapidis, whose own 8-year-old uses earpods, says: “Our advice to people is… if people are still worried they can reduce their exposure further by using wired headphones.”