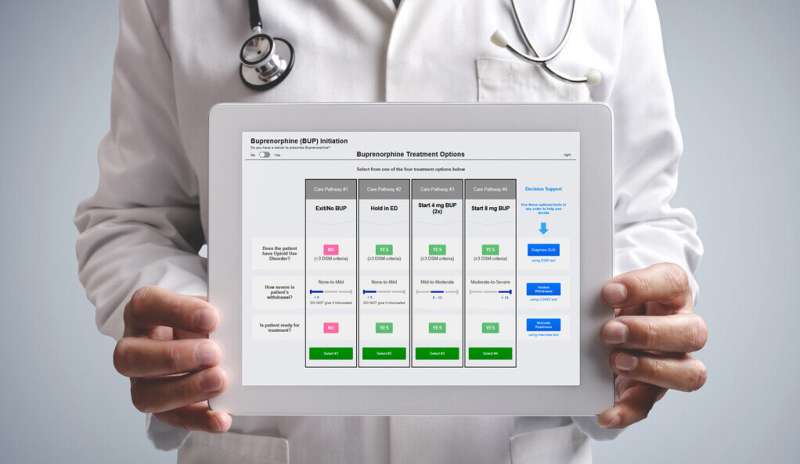 Emergency departments (EDs) are an important point of care for people with opioid use disorder. But EDs in the United States have been slow to meet patient needs for opioid use treatments like buprenorphine, past research shows. A new tool developed by Yale researchers aims to close this gap by helping physicians feel more prepared to offer these medications.

In a recent trial, the researchers found that the tool—called EMergency department-initiated BuprenorphinE for opioid use Disorder (EMBED)—increased the number of physicians initiating buprenorphine treatment in the ED. Their findings were reported June 27 in the BMJ, a global medical journal.

Approved by the U.S. Food and Drug Administration in 2002, buprenorphine can relieve withdrawal symptoms from opioids, like heroin or fentanyl, and prevent opioids from having effects on the body. Research has shown it is effective for treating withdrawal, retaining patients in opioid treatment, and reducing cravings, transmission of infectious diseases, and overdose deaths. EDs, however, have been slow to adopt the treatment for several reasons, including limited education on use, perceptions of lack of time and resources, and stigma.

“While EMBED can’t address all of these concerns, it can help with workflow and technical barriers and help physicians with less experience in this area feel more equipped to provide treatment,” said Ted Melnick, associate professor of emergency medicine and lead author of the study.

EMBED is fully integrated in the ED’s electronic health record (EHR) system workflow. Previous technology solutions to change clinical practice have incorporated pop-up alerts or reminders. Melnick explains that these sorts of alerts can arrive at the wrong time or in the wrong situation, and in an already busy environment, they can quickly become a nuisance. “They often get dismissed or ignored instead of achieving their intended effect,” he said.

Melnick and his team didn’t want EMBED to add to physician burden, so there are no pop-up alerts or reminders built into the tool. Instead, physicians have the option to engage with EMBED, and when they do, the tool provides as much or as little support as the physician wants. Support offered by EMBED covers three areas: diagnosing opioid use disorder, assessing withdrawal severity, and motivating patients to accept treatment. EMBED then automates several EHR activities—visit documentation, treatment orders, prescriptions, discharge instructions, and referrals for ongoing treatment—streamlining workflow.

“It was important to us that we build something that doctors would love to use. We wanted to make the technological solution one that people would seek out,” said Melnick. “The support EMBED offers lowers the barrier to entry if physicians are unfamiliar with this type of treatment. But even as physicians become more comfortable, EMBED is still a one-stop shop to get all of the EHR tasks done and make it simple to do the right thing for these patients.”

Melnick and his colleagues conducted their study in 21 EDs across five health care systems and five states. They found that in the EDs where EMBED was available, significantly more physicians initiated buprenorphine treatment than in those EDs without the tool. Further, while not every physician used EMBED even when it was available to them, when the tool was used it was associated with high rates of treatment initiation.

Going forward, Melnick says, it will be important to find ways to steer more physicians toward using tools like EMBED, because when they do, it has the intended effect. And boosting use could have major impacts on treating this population.

“If we can get to a point where we initiate these treatments with every patient with opioid use disorder that comes to the ED, I think we can make big inroads in narrowing the gap between treatment need and access to care,” said Melnick.

In the study, the percentage of patients receiving opioid-related treatments was similar between EDs with and without EMBED. This, Melnick said, suggests EMBED needs to be one part of a more comprehensive strategy to meet the needs of patients with opioid use disorder, one that also addresses stigma, community resources, and post-ED treatment.

Yale researchers have shown in past research that when patients receive buprenorphine in an ED, they are far more likely to engage in outpatient addiction treatment and less likely to use unprescribed opioids. “We also know that when patients come to the ED after an opioid overdose, there’s a 5% mortality risk within the following year, which is higher than a lot of medical conditions we see where we wouldn’t dream of not offering treatment,” said Melnick, noting how critical these treatments are for patients with opioid use disorder.