Kelli Mulhollen Dumas said she thought the small, red bumps on her son's skin were bites from chiggers or mosquitoes.

Her son, Michael, had just returned from Florida, and she knew he had spent a lot of time outdoors. But within days, she said, the 17-year-old had several more spots – then "his whole backside" was covered. Ultimately, Dumas said, areas on her son's feet, legs and buttocks were covered in a red, itchy rash – the telltale sign of a certain type of hookworm, a parasite that can infect both animals and humans. 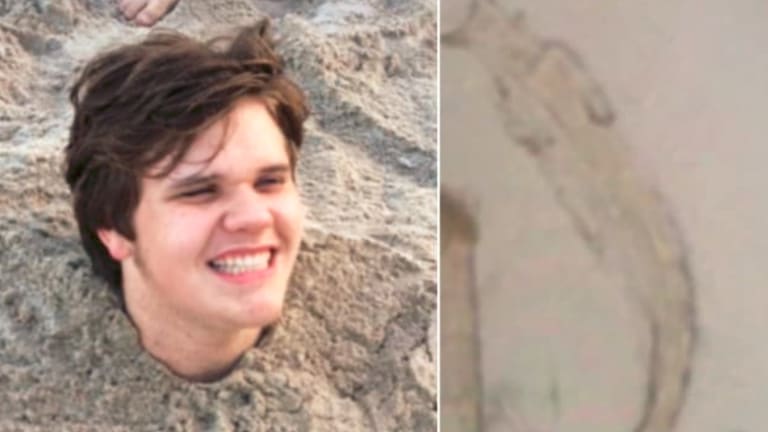 Michael Dumas, 17, got hookworm when his friends buried him in the sand at a Florida beach in June.

Dumas said the doctor confirmed that it was cutaneous larva migrans, a skin condition caused by larvae from animal hookworms, the Centres for Disease Control and Prevention says.

"I can't stress enough how traumatic it is for a teenage boy – and his mother – to know that there are worms living in his body," Dumas said in an interview on Wednesday.

Dumas, from Memphis, Tennessee, said she believes that her son contracted the parasite in mid-June on a beach in South Florida.

Hookworm is spread through the faeces of animals or humans who have the parasite, and people can contract it by simply walking barefoot on sand or soil that has been contaminated, the CDC says.

Michael had been buried up to his neck in sand.

The state and county health departments in Florida did not respond to requests for comment on potential contamination.

Dumas said the doctor gave Michael an antibiotic and an anti-parasitic but the medication "wasn't working fast enough," so she made an emergency appointment with a dermatologist this month.

Dumas said the dermatologist used cryotherapy, a treatment in which liquid nitrogen is commonly used to "freeze" lesions off the skin. But during treatment, she said that her son urged the doctor to stop, saying he felt as though he could "feel it running from the liquid nitrogen".

"It's disgusting," she said . "It's beyond disgusting."

There are two main types of the parasite – human and animal, or zoonotic, hookworm.

Bobbi Pritt, director of the Clinical Parasitology Laboratory in the Mayo Clinic's Department of Laboratory Medicine and Pathology, said both kinds could be transmitted to people, and it happens in a similar way – animals or humans infected with the parasite defecate into sand or soil and, because their faeces carry the parasite's eggs, the ground then becomes contaminated.

Once in the ground, the eggs hatch into larvae, or immature hookworms, and when people come into contact with them, they can penetrate the skin, Pritt said.

The results vary based on the type of hookworm.

Hookworm is an intestinal parasite, so when human hookworms penetrate a person's skin, they migrate into the bloodstream and take up residence in the gut.

However, animal hookworms cannot adapt to the human body, so the larvae usually never make it into the person's intestines, Pritt said. Instead, Pritt said, the larvae, which are microscopic, roam around in the person's skin – causing those red, squiggly marks – trying, but unable, to mature or to reproduce. Pritt said that eventually the larvae die.

That itchy and sometimes painful rash is called cutaneous larva migrans – the same one that Michael's mother said he was diagnosed with – and it's caused by the animal form of hookworms.

Susan Montgomery, epidemiology team lead of the Parasitic Diseases Branch of the CDC's Centre for Global Health, said that animal hookworm infections in humans are typically treated with medications, such as an anti-parasitic. But even without treatment, Montgomery said, the parasite will die within several weeks. She said people do not usually report feeling larvae move in the skin.

Dumas said her son's ordeal "has been a nightmare".

She said that her son had also developed a staph infection from the hookworms. He is on medication to treat not only the parasite but also the staph, a bacterial infection that, when not treated promptly and properly, can become life-threatening, according to the Mayo Clinic.

Last week, Dumas posted a prayer request – and a warning to other parents – on Facebook:

"Urgent prayer request!! Michael went to Miami June 20 for a mission trip. He was buried in the sand for fun and it has become our nightmare. Four of our people contracted a parasitic infection, hookworms, from the Pompano Beach. Michael has the worst case, by far. He has taken Clindamyacin, Ivermectin, a steroid dose pack, and Albenza which cost $1356 for 6 pills (yes that is with insurance and yes I had to pay it!). But you can get them for $0.30 per pill in Honduras. Thank you, FDA. We have been to the pediatrician 4 times, to a dermatologist and have a follow up appointment today. He is in pain and this is AWFUL. Never be buried in sand or allow your children to be either! I am only showing a few pictures because it is so disturbing. Please, please pray for him to heal. Also feel free to SHARE THIS POST AND WARN OTHERS. The Health Department in Pompano Beach said "Everyone knows to wear shoes on the beach because you can get parasites." I assured them everyone does NOT KNOW THAT!!"

Although some people may not experience symptoms with hookworms, the most common symptoms are itchy skin and rashes, according to the CDC. People with more severe infections may also have abdominal pain, diarrhoea, a decreased appetite and weight loss, among other things.

To avoid potential infection, the CDC recommends "not to walk barefoot in areas where hookworm is common and where there may be human faecal contamination of the soil" or to ingest the soil.

Montgomery, with the CDC, said that people should wear shoes on the beach and then sit on a towel. She said it was also important for pet owners to have their dogs and cats regularly dewormed.

Dumas told the Post on Wednesday she wants others to be aware of hookworms because "I don't want anyone else to go through what my son has been through.

"I'll never walk on the beach again without shoes," she said.