A colon or a question mark? Doctors release fascinating image of a baby’s unusually-shaped large intestine

It may look like a question mark – but it’s not.

Doctors were worried when the boy was vomiting, unable to pass stools and had a swollen stomach 24 hours after being born.

Scans showed a ‘shortened colon that appeared in the shape of a question mark’, medics wrote in a prestigious medical journal. 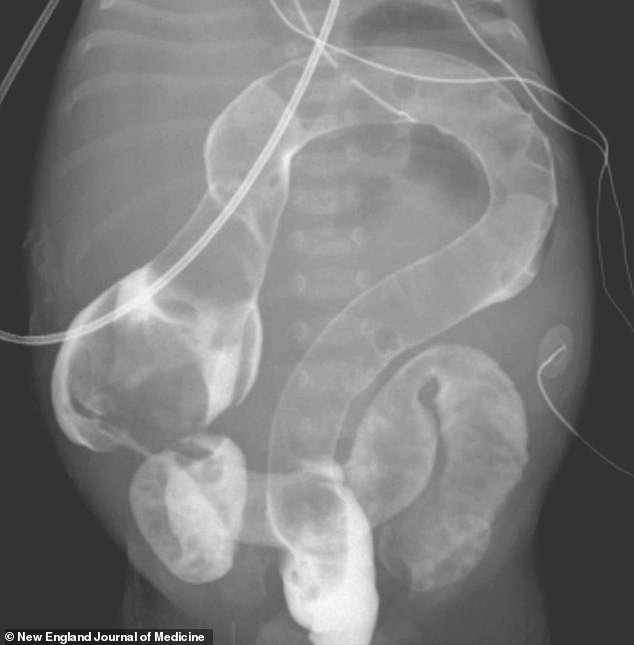 It may look like a question mark – but it’s not. In fact, it’s actually a medical scan of a newborn baby’s uniquely-shaped large intestine

They suspected the infant had total colonic aganglionosis, a complete lack of nerve cells called ganglion that are crucial for digestion.

Further tests confirmed the boy, who hasn’t been identified, had no ganglion cells and he was diagnosed with Hirchsprung’s disease.

When these nerves are missing, faeces can build up and form a blockage. This can cause constipation, according to the NHS.

The diagnosis was also confirmed by scans showing he had thickened nerve fibres – a hallmark sign of Hirchsprung’s.

WHY WAS HIS COLON SHAPED LIKE A QUESTION MARK?

The Medical University of South Carolina states the colon – or large intestine – is shaped ‘somewhat like a large question mark’.

The organ starts near the right hip, moves up to the ribs, goes across the body and then down to the left hip. It then curves towards the anus.

However, for this unnamed baby, his colon did not go up from his right hip and straight across. Instead, it went to his left ribs.

Doctors who treated him diagnosed him with Hirchsprung’s disease, which affects one in every 5,000 babies, according to figures.

Question-mark colons, as they are known, have been linked to several cases of the condition. However, it is unclear why the condition causes the uniquely-shaped colon.

‘In Hirschsprung’s disease, the nerves that control this movement are missing from a section at the end of the bowel, which means poo can build up and form a blockage,’ the NHS states.

Hirschsprung’s disease affects one in every 5,000 babies. The condition is usually picked up soon after birth, the NHS states.

Surgeons operating on the baby took samples of his entire colon, which once again confirmed he was missing his ganglion cells.

However, they were found to be ‘abundant’ in his terminal ileum, the end of the small intestine that connects with its larger counterpart.

Writing in the New England Journal of Medicine, doctors revealed the boy underwent a procedure called an end ileostomy.

It involves removing part, or all, of the colon, as well as bringing the small bowel closer to the surface so a stoma can be formed.

Six months later, the boy underwent a colectomy to remove the remaining part of his large intestine.

The operation also rejoined the leftover part of his rectum, the final segment of the colon, to his ileum, leaving him with no large intestine.

The report was written by Dr Peter Masiakos, of the Massachusetts General Hospital, and Dr Paul Wales, of the Hospital for Sick Children, Toronto.

However, it was not mentioned where the baby, who was born after 39 weeks to a 28-year-old mother, was from.

When the boy went for a check-up, it was revealed that he was able to pass his stools and doctors said he was ‘growing well’.