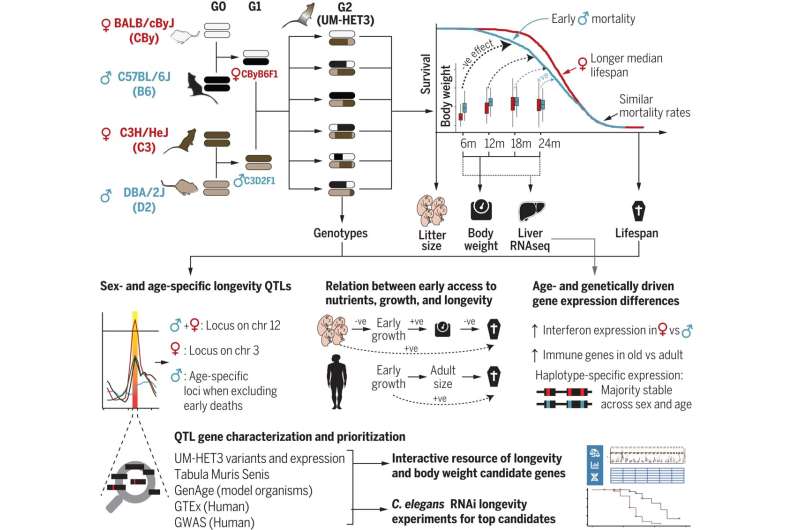 A team of researchers affiliated with several institutions in Switzerland and the U.S. reports evidence that the genetics of longevity are influenced by both gender and age. In their paper published in the journal Science, the group describes their study of aging in mice and humans. João Pedro de Magalhães, with the University of Birmingham, has published a Perspective piece in the same journal issue outlining the technical challenges to understanding how aging works and the work done by the team on this new effort.

Scientists have been studying the aging process for many years but still do not have a good explanation for why organisms age and why some live longer than others. In this new effort, the researchers wondered if something in the genome plays a role in how long a species lives on average.

Noting that another team had created a very large dataset of information regarding aging in nearly 3,000 mice, the researchers found that it also contained genetic information. After obtaining access to the database, they analyzed that genetic information—more specifically, they conducted quantitative trait locus mapping. They found multiple loci that they could associate with longevity, some that were specific to one or the other gender. They also found that mice who weighed more during their early years or who had small litter sizes tended to die younger. They suggest the same genes that were associated with aging may have also played a role in the other two traits. The researchers also found that the aging-related genes they isolated appeared to remain dormant until the latter stages of a given individual’s life.

The researchers then studied data available in public biobanks and found human genes that appeared to play the same role as the age-associated genes in mice. Next, they looked for and found similar genes in a type of worm—disabling those genes influenced their longevity.