Laser guided 3D printed hip surgery? It gets my vote! MP Nadine Dorries on the moment she ‘cried with relief’ after undergoing pioneering procedure that cured her of agonising pain 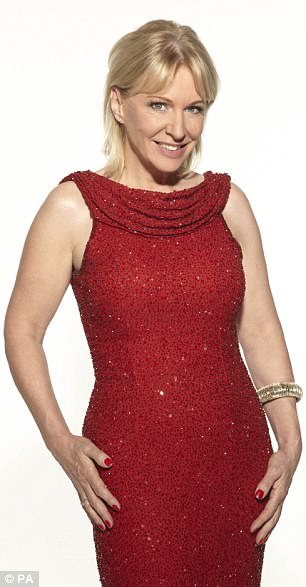 Nadine, 61, was diagnosed in 2013 having suffered worsening pain and immobility, but declined a joint replacement

Nadine Dorries is a feisty battler.

The Tory MP famously branded David Cameron and George Osborne ‘a pair of posh boys’ who didn’t know the cost of milk, and was later suspended from the Conservative Party for appearing on I’m A Celebrity… Get Me Out of Here! – only to be reinstated less than six months later – and has been a vociferous backbench stalwart ever since.

Her personal life has been no less eventful. The Liverpool-born daughter of an Irish Catholic bus driver, Nadine overcame poverty in her childhood to earn £500,000 a year running her own business before going into politics.

And three years ago the trained nurse and mother-of-three revealed that she had been abused, aged nine, by the family vicar.

In her first book, The Four Streets, she took her revenge by writing about the abuse and later naming her attacker, only to be informed by a Mail on Sunday journalist who tracked him down that he had died a few years earlier.

More recently, she went public about suffering with stress-induced alopecia.

So it should come as no surprise that her approach to handling the excruciating pain of hip arthritis was simply ‘to hobble on’.

Nadine, 61, was diagnosed in 2013 having suffered worsening pain and immobility, but declined a joint replacement. 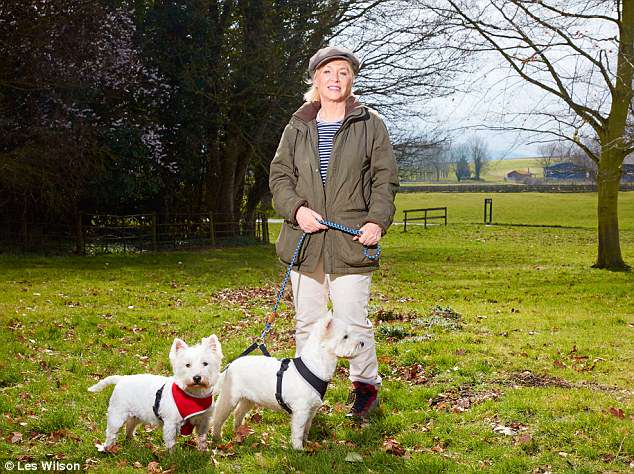 More walkies: Nadine out with her dogs Darcey and Teddy. More recently, she went public about suffering with stress-induced alopecia

She says: ‘I’m busy travelling to Westminster at the beginning of the week, then on to Mid-Bedfordshire for meetings and to visit constituents, and then I spend my weekends in the Cotswolds.

‘I told my surgeon I could manage my hip with painkillers but he said eventually I would have to have the operation.’

Things came to a head during last year’s General Election. She says: ‘I’ve always pulled my weight and done a lot of door-to-door visits, but my right hip was just too painful to walk on for more than 45 minutes.’ 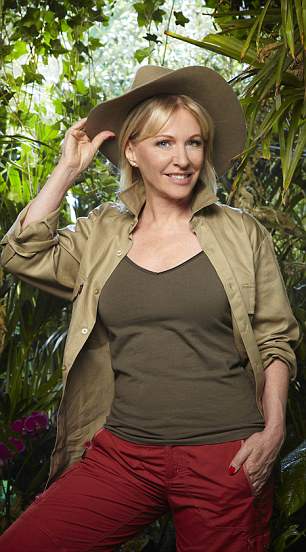 Nadine when she appeared on I’m a Celebrity… Get Me Out Of Here!

Nadine booked the hip op for December last year. ‘I’d been hobbling on painfully but in the end, my leg would just collapse and I fell over a lot. It was utterly excruciating,’ she recalls.

‘I was counting down the days until I could be pain-free, but was determined to be in the Commons until January to support the Brexit Withdrawal Bill so cancelled the operation.

‘Then at New Year, it was pretty obvious I was on my last legs when I went to a party and woke up the next morning unable to get out of bed. I had to call for someone to help me on to my feet.’

Hip-replacement surgery is offered when the natural ball-and-socket hip joint becomes damaged, usually due to arthritis, which is caused by the smooth cartilage tissue that lines the joints wearing away.

However, when Nadine finally went under the knife she was offered cutting-edge orthopaedic technology under the care of Professor Sion Glyn-Jones, a consultant at the Nuffield Orthopaedic Centre and the John Radcliffe hospital, where he offers the procedure on the NHS.

He explains: ‘We’re fine-tuning hip-replacements. In the past, surgeons tended to use a standardised approach as to where a hip replacement should be placed within the socket.

‘First, the patient has a 3D CT scan of the hip and lower limbs. They also have special dynamic X-rays of the spine during different activities such as sitting, standing and stepping up.

The CT and X-ray images are then combined with other data to produce a virtual model of that specific patient’s hip and pelvis movements.

‘A computer programme then performs multiple simulations to provide a range of hip-replacement positions.

‘I choose the best position for each patient dependent on their biomechanics and lifestyle. 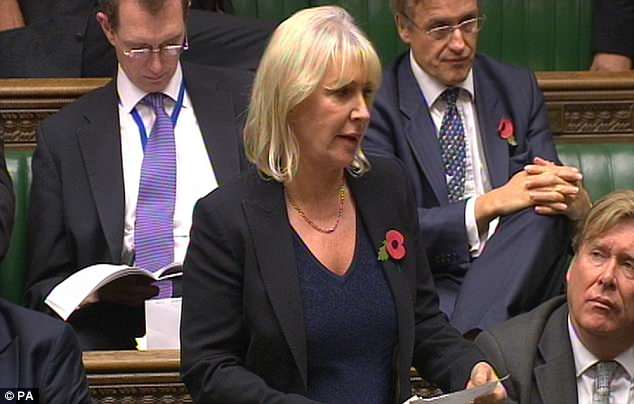 The Tory MP famously branded David Cameron and George Osborne ‘a pair of posh boys’ who didn’t know the cost of milk, and was later suspended from the Conservative Party for appearing on I’m A Celebrity… Get Me Out of Here!

‘Plastic guides are then 3D-printed to enable me to accurately reproduce the chosen hip-replacement position during surgery. We use laser guidance for improved accuracy.’

About 700 of these procedures have been carried out in the UK so far.

Prof Glyn-Jones says this advanced personalisation of hip replacements will reduce the frequency of dislocations, which happen in about three per cent of patients and are the most common early complication from surgery.

In January, Nadine was fitted with a titanium-and-ceramic implant, with the socket made from titanium, lined with a special type of plastic infused with Vitamin E, an antioxidant, to minimise wear and tear.

Nadine returned to the Commons following Easter recess in mid-April, after ‘a pretty gruelling 12 months’. But now she says: ‘I’m beginning to feel like a new woman’

‘This approach preserves smaller muscles around the hip and most of the hip-joint lining, which are important for hip function and stability.’

Nadine says she worked until the last minute before the procedure. ‘I fitted in broadcast commitments until late Sunday evening in London, before being operated on in Oxford, early Monday morning,’ she adds.

‘I had to stay in bed an extra day as my blood pressure was low, then I was up on my feet and having physiotherapy. I almost cried with relief when I realised the pain had gone.

‘It’s desperately wearing suffering so long with extreme levels of pain. It even got in the way of my novel-writing.’

True to form, the busy MP didn’t quite follow doctors’ orders. She admits: ‘I am a bit of an alpha female and just thought I could do with fewer painkillers than recommended.

‘I trained as a nurse but it took a friend who was also a nurse to point out that my rapid pulse and high temperature were due to not taking enough pain relief. I had to take codeine and Tramadol and was still taking the latter six weeks into recovery to help me sleep.

‘I also tried to do without crutches and sticks too quickly, which my physiotherapist reprimanded me for.

‘There’s a lot to think about after an operation like this. You have to sleep on your back and any sort of bending has to be done carefully or not at all if it endangers the new hip.

‘Just small things like putting on your socks become an effort. You do need a lot of support and patience to nurse yourself through the adjustment phase. Prof Glyn-Jones told me to be kind to myself and my new hip while it bedded in.’

Nadine returned to the Commons following Easter recess in mid-April, after ‘a pretty gruelling 12 months’. But now she says: ‘I’m beginning to feel like a new woman.

‘I’ve got a very small scar on my right hip, which is barely noticeable. I’m looking forward to more long walks with my two West Highland terriers, Darcey and Teddy, and hitting the ski slopes again.

‘I wish I’d had it done much sooner. There’s a lot to be said for a life without pain.’

Hip-replacement surgery can be a life-changing operation, as Nadine says. Not only does it mean relief from arthritic pain but it means people can move again, which – when you have been limited for years – is incredibly liberating.

She was fortunate enough to have had a state-of-the-art version of the operation, but standard hip replacements available on the NHS are also absolutely brilliant with fewer than one in 100 patients suffering post-op complications.

Recovery is very dependent on the focus of the patient, rather than on the method used by the surgeon.

Patients are encouraged to take part in an ‘enhanced recovery programme’ after hip replacement.

It means you’ll be helped to get mobile – out of bed, into a chair or even walking – within six hours of surgery.

This starts to strengthen the muscles and restore flexibility, but also helps to prevent blood clots, which can really throw a spanner in the works if they develop.

It’s true that access to NHS physiotherapists is ever more limited, so it’s vital to make sure you note the exercises that you will be advised to try at home – and make sure you actually do them. 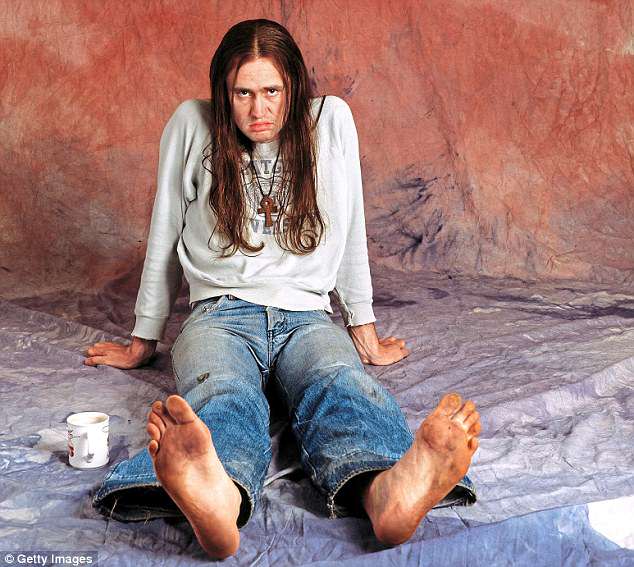 Nigel Planer says his antics on set for the 1980s BBC comedy, followed by performances in West End musicals such as Chicago and We Will Rock You, left him with agonising back pain

He shot to fame as slouching hippy Neil in The Young Ones, below.

But actor Nigel Planer says his antics on set for the 1980s BBC comedy, followed by performances in West End musicals such as Chicago and We Will Rock You, left him with agonising back pain.

Nigel, 65, has had three operations to correct corroded discs.

‘For years I was unable to sit or stand properly because of the pain,’ he said. ‘Now I have two titanium discs and they have changed my life.’

He has also taken up t’ai chi to help keep his core strong.

‘My physio recommended it to me – and I love martial arts,’ he says.

‘There are certain things that I’m not allowed to do – I can’t do anything high-impact like jogging, so t’ai chi is perfect. It’s also really helped to strengthen my legs.’

His final trick for any lingering back pain? A hot-water bottle.

‘Whenever I go away, I take hot-water bottles with me to soften my muscles.’

We’re told that sitting can be as bad for our health as smoking, raising the risk of cancer and heart disease.

But new research shows this negative effect may not apply if you’re fit and strong.

Researchers at Glasgow University analysed health and lifestyle data from almost 400,000 people – including measurements of grip strength and fitness – and found that risks associated with a desk job were significantly reduced for those scoring highly on fitness examinations and who had an increased grip strength.

Study co-author Dr Carlos Celis said: ‘Our study shows the risks associated with sedentary behaviour are not the same for everyone.

Targeting people with low fitness and strength for interventions that reduce the time they spend sitting down may be an effective approach.’

‘No autism threat to baby’ if mum eats fish

Eating fish during pregnancy does not cause autism, despite popularly held beliefs to the contrary, say experts.

Scientists at the University of Bristol looked at the assumption that mercury exposure during pregnancy is a major cause of autism, using evidence from nearly 4,500 women who took part in a 1990s study.

Using analysis of blood samples, researchers found no links between levels of mercury in the mothers and autism or autistic traits in their children.

An hour’s meditation could be just as effective for easing anxiety as an hour’s therapy.

Scientists at Michigan University used MRI scans and reports from study volunteers to measure anxiety symptoms before and after meditation.

Report author Professor John J. Durocher said: ‘They had reduced stress on arteries an hour after the session. This could help prevent conditions such as high blood pressure.’

The National Institute for Health and Care Excellence (NICE) recommends Mindfulness as a way to prevent depression in those who have had three or more bouts of it in the past.

Guided meditation sessions can be found on free apps such as Stop, Breathe & Think, Headspace or The Mindfulness App.