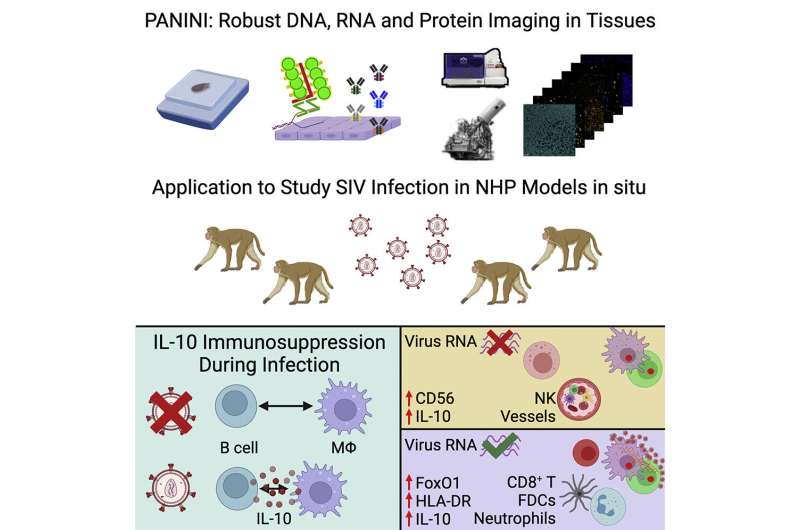 With more than 35 million people worldwide living with the virus and nearly 2 million new cases each year, HIV remains a major global epidemic. While anti-retroviral therapy (ART) can control the infection, dormant HIV-infected immune cells persist in certain tissues throughout the body and can spring back into action if ART is interrupted. This latent viral reservoir is a major challenge in the development for a cure for HIV.

To better understand the mechanisms and pathology of HIV persistence, researchers, including Sizun Jiang, Ph.D., principal investigator in the Center for Virology and Vaccine Research at BIDMC, developed a new approach that allowed the team to characterize the viral reservoir and immune responses within tissues infected with SIV, a related virus, compared to un-infected control tissues. Doing so revealed differences between the infected and uninfected tissues that enabled the scientists to propose a model for the mechanism by which SIV infection dampens the immune response.

“Current approaches to study viral tissue reservoirs often require cells to be taken out of their native tissue context,” said lead author Jiang, who started the work while at Stanford University and completed it at BIDMC. “Our technique allows us to characterize protein molecules in situ, which is paramount for enabling studies of viral infection and beyond.”

Coupled with other imaging techniques, the team used PANINI—Protein And Nucleic acid IN situ Imaging, which utilizes antibodies to quantify DNA, RNA and protein levels within tissue compartments—to measure more than 30 tissue features in archival lymphoid tissue from healthy or SIV-infected non-human primates. The technique helped reveal 11 distinct regions, or cellular neighborhoods, within the tissue microenvironment. When researchers compared these neighborhoods between healthy and infected tissues, the differences confirmed well-known hallmarks of retroviral infection and allowed the scientists to develop a machine-learning model to predict viral activation.

“Fundamental questions remain, and future work in situ will be critical to improve our understanding of viral infections and beyond,” said Jiang. “We anticipate PANINI, coupled with other widely adopted imaging strategies, represents a great step forward for advancing insights needed to better guide therapeutic intervention strategies.”