Skip to content
HomeHealth NewsSkin injuries to babies in neonatal care could be avoided with new splint, trial shows 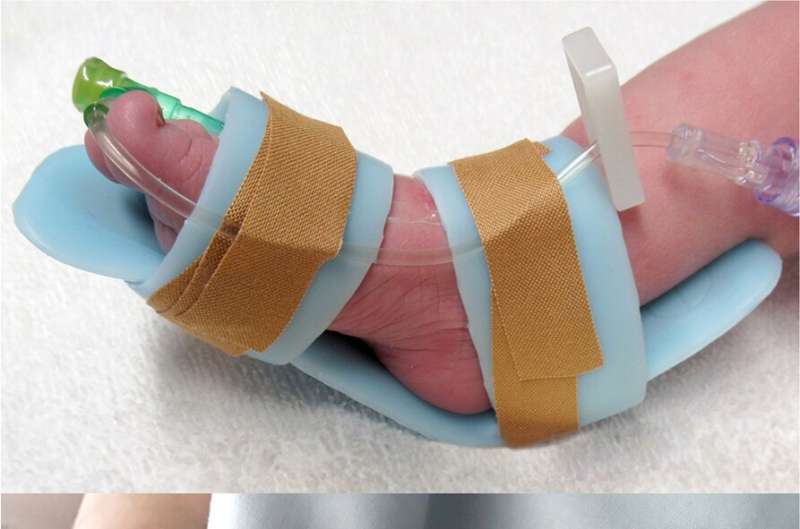 A new device to prevent skin injuries to babies in neonatal intensive care units has been successfully trialed in a study led by Dr. Deborah Harris, a neonatal nurse practitioner at Te Herenga Waka—Victoria University of Wellington.

Most babies admitted to hospital need an intravenous drip to deliver fluids and medications, says Dr. Harris. This drip is secured to the baby’s skin using adhesive tape.

“Removing the adhesive tape is painful, and can cause skin injuries and scarring. Skin damage also increases the risk of the baby getting an infection and being in hospital longer. We designed a device called a Pēpi Splint that can be used to secure the drip without the need to apply adhesive tape to the baby’s skin,” Dr. Harris says.

A trial of the Pēpi Splint on 38 babies at Wellington Hospital’s neonatal intensive care unit showed it was effective and avoided the skin damage caused by adhesives.

“The Pēpi Splint held the drips secure for 34 of the 38 babies in our trial. In four cases, the splint became loose either because it hadn’t been secured properly or was dislodged when the baby was removed from the cot for breastfeeding.”

“Skin injuries are common in neonatal units and the damage caused to a baby’s skin by adhesive tape can be considerable. Removing the tape has the potential to strip 70% to 90% of a baby’s epidermis. We hope the Pēpi Splint will help reduce these injuries to newborns.”

The splint is made from medical-grade silicon gel and contains an aluminum mesh, allowing it to be molded to the baby’s limb. Adhesive tape is used on the Pēpi Splint itself to secure it to the drip, but tape is not applied to the baby’s skin.

During the trial, modifications were made to the splint to make it easier to use. “After these changes, clinicians involved in the trial reported the splint was easy to apply,” Dr. Harris says.

Most parents supported the device’s use: 52 of 58 (90%) said they would participate in the study again if they had another eligible baby.

The Pēpi Splint, developed in collaboration with a design engineer, can be washed and sterilized for reuse.