Girl, 2, has such severe psoriasis her skin is ‘lobster red’ and she is shunned by strangers over fears she is contagious

A toddler with such severe psoriasis her skin goes ‘lobster red’ gets shunned by strangers who make rude remarks and ask her parents if she’s contagious.

Maisie Buchanan, now two, was hospitalised for six weeks when she was diagnosed with infant psoriasis which leaves her skin red raw and burnt-looking.

Parents Lesley Buchanan, 35, and Alistair Buchanan, 36, say they regularly face comments from strangers questioning their parenting skills and assuming Maisie’s ‘crab-coloured’ skin is caused from being left out in the sun.

The tot has to wear special mittens to stop her clawing at her skin at night and was in such pain she cried when she was picked up and tragically ‘lost her smile’.

Her condition is mostly under control now thanks to weekly injections of strong medicine and her parents covering her in skin creams four times a day.

But Maisie still has occasional flare-ups which attract attention in the street, her parents say. 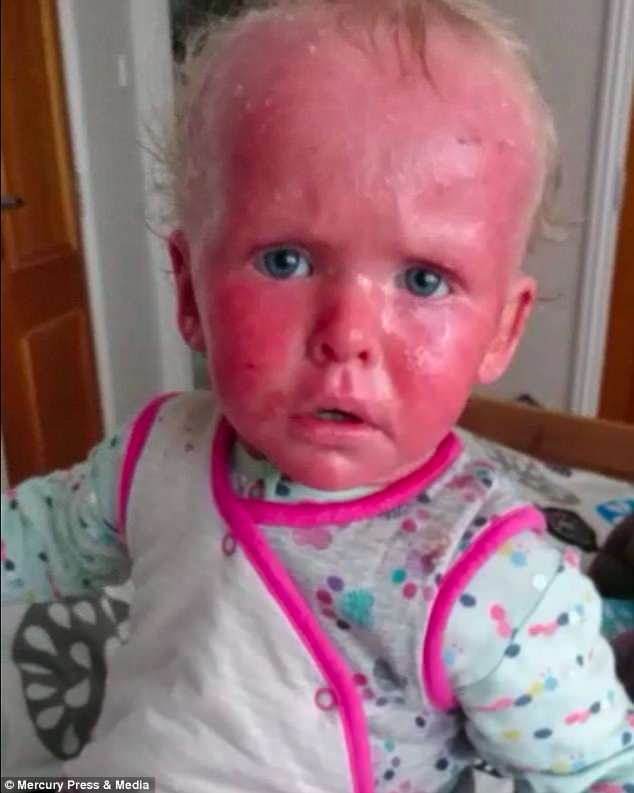 Maisie Buchanan has chronic infant psoriasis, which makes her skin red and inflamed 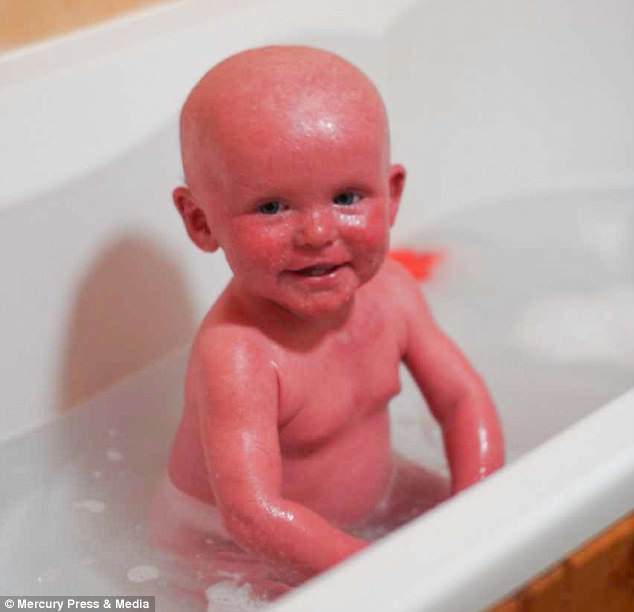 The condition makes her ‘look like a little crab’, her mother says 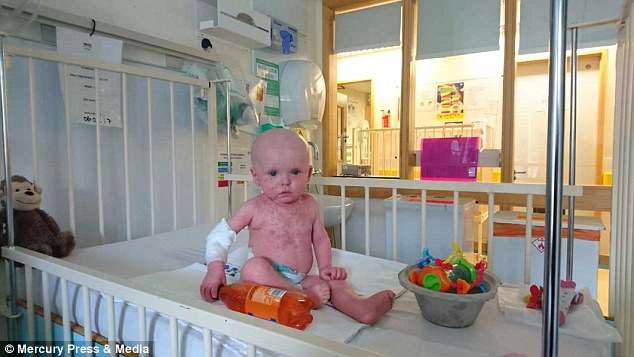 Mrs Buchanan, from Falkirk, Scotland, said: ‘Maisie’s skin is very flushed, it can go lobster red, and if she’s flaking she looks different. People pick up on that and it’s very hurtful.

‘They will ask me “what’s wrong with her?” like I’m a neglectful parent.

‘I always respond “there’s nothing wrong with her, she’s a happy sweet little girl with a skin condition.”

‘Others have asked if I left her out in the sun too long or forgot to put her sun hat on.

‘People assume the worst and that she’s been scalded. I wonder if they think I’ve done that to my child. 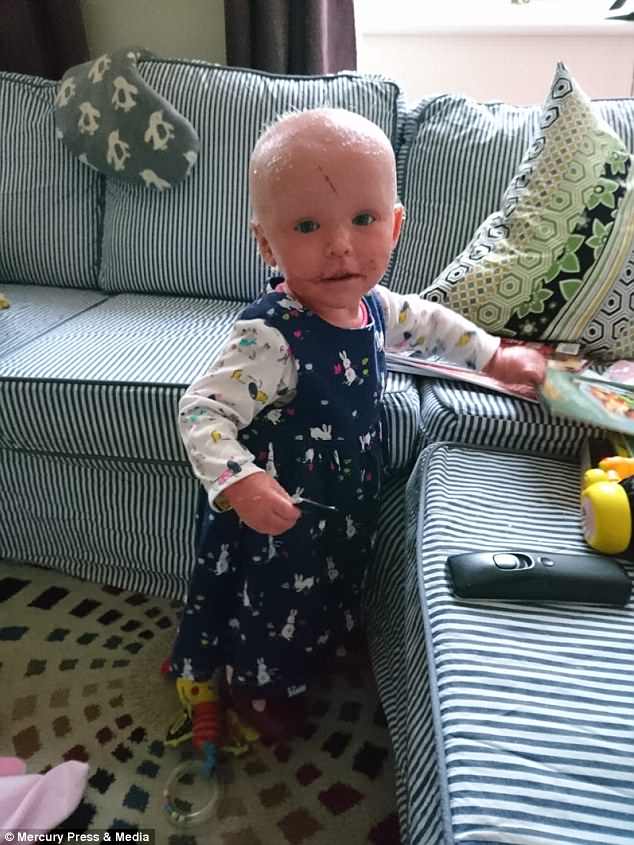 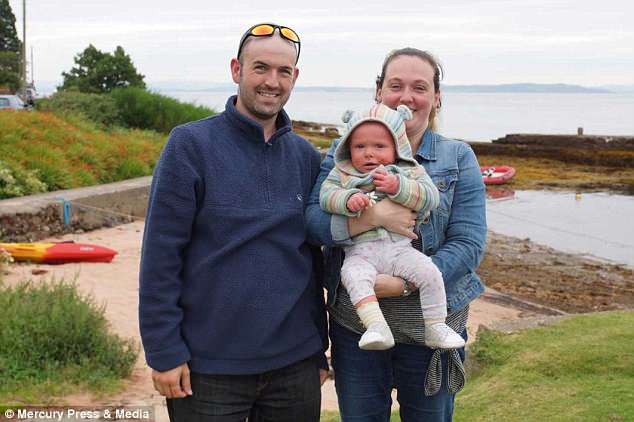 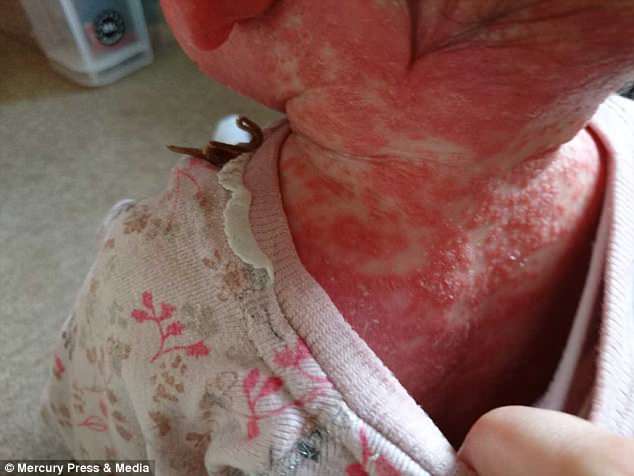 Maisie has an extreme case of psoriasis, a skin condition which causes red, flaky, crusty patches of skin

Maisie has a condition called chronic infant psoriasis, a form of the skin condition which causes red, flaky, crusty patches of skin.

Psoriasis is not fully understood but is thought to be caused by a problem in the immune system.

Symptoms vary between different patients and may range from small patches of dry skin to more extreme cases like Maisie’s.

‘At the beginning of last year she wouldn’t stop scratching,’ Mrs Buchanan said.

‘She would claw herself at night so in the morning her finger nails would be covered in blood and would have scratches on her face. 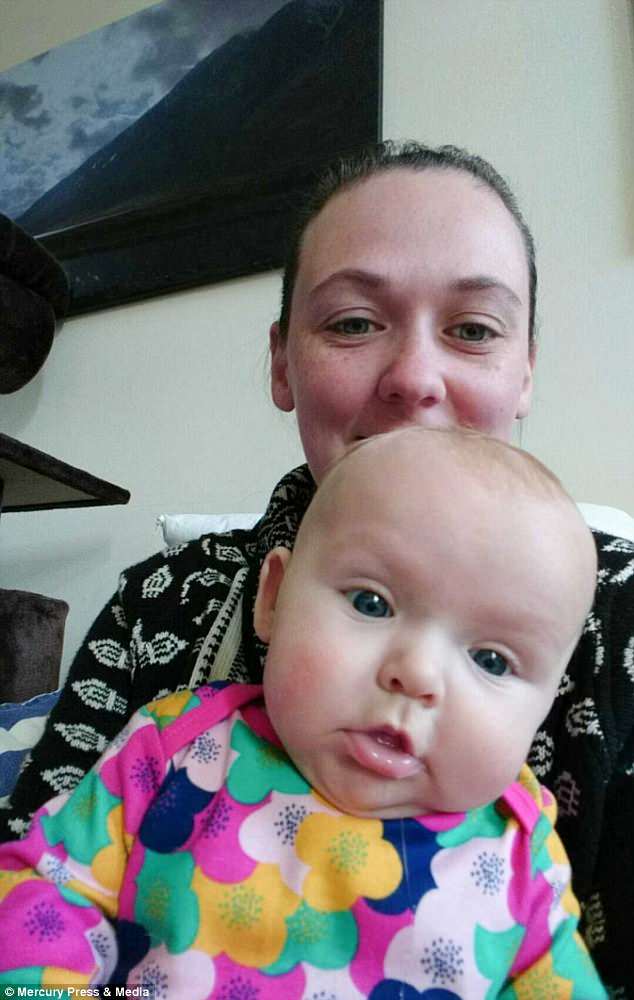 Maisie first started to show signs of the condition when she was just four months old, her mother (pictured) says 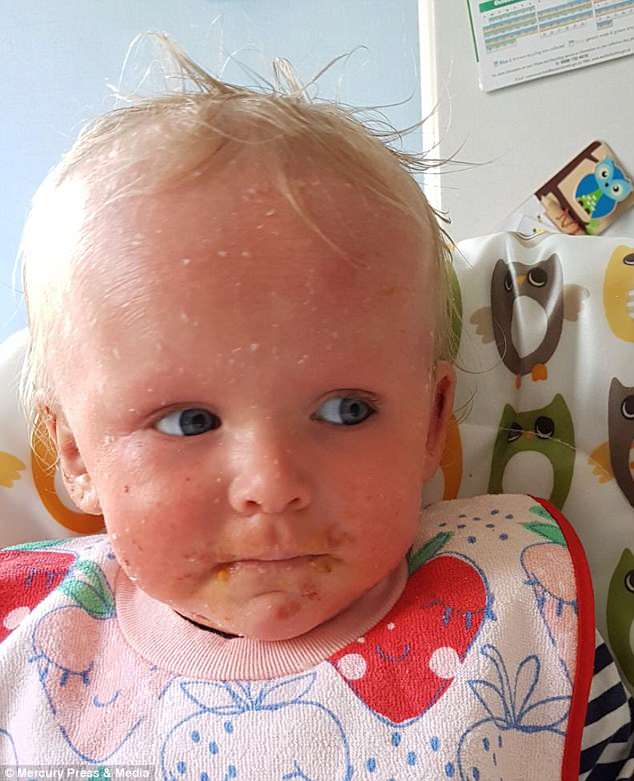 ‘We were watching our little girl in pain and it was heart breaking.

‘She went from being interested in things and curious to being like a little doll, hunched in on herself and not making any effort.

‘She wouldn’t grab at things or try to crawl. She lost her smile.’

Maisie started showing signs of the disorder at 16 weeks old when patches appeared on her face and within a few months her whole body was covered in red, itchy blotches.

Thanks to strong medication and her parents slathering her skin in creams four times a day the youngster is now thriving, but she still has nasty flare ups which attract attention in the street.

Strangers in public ask if Maisie is contagious

Retail supervisor Mrs Buchanan said: ‘My husband was with her in a supermarket when her face was very inflamed and a woman in her sixties said to him “look at the state of your child”.

‘She implied that he couldn’t look after his child if her face looks like that.

‘I’ve had people look at her and ask if she’s contagious and move their children away with a look of passive disgust on her face. 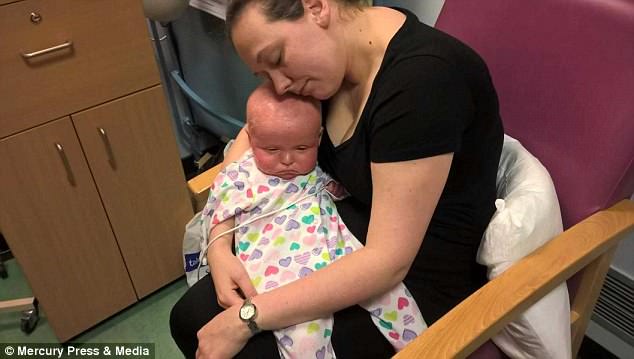 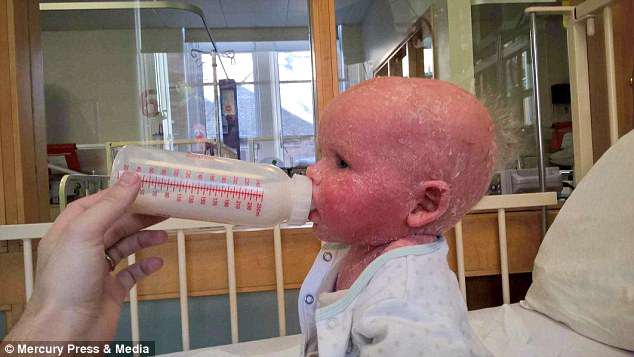 Maisie struggled to wean when she was young and doctors diagnosed her with ‘failure to thrive’, which means she was not gaining enough weight as a baby

‘I just want to get a megaphone and shout “it’s infant psoriasis and she’s not contagious”.

‘It’s when adults say something that it’s upsetting. I’ve heard children say “what’s wrong with that baby’s skin?” but that doesn’t bother me as they are curious about it.

‘With adults common sense seems to go out the window.

‘Maisie’s too young to understand but she sometimes looks at me if I’m upset about it and will hold my finger.

‘My daughter is a strong-willed warrior’

‘My daughter is perfect in every way no matter how red and inflamed she is. She’s a strong-willed warrior.’

Psoriasis affects around two per cent of people – 125 million people around the world – and is most common among adults.

It can be hereditary or caused by a trigger such as a skin injury, smoking or stress. 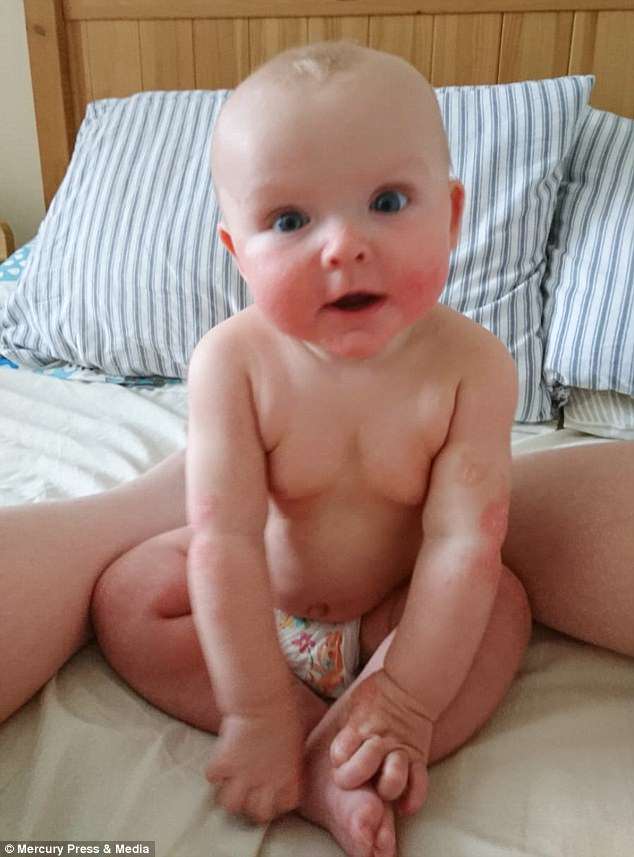 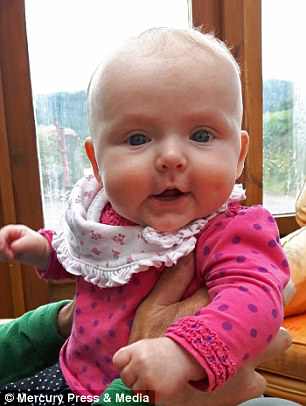 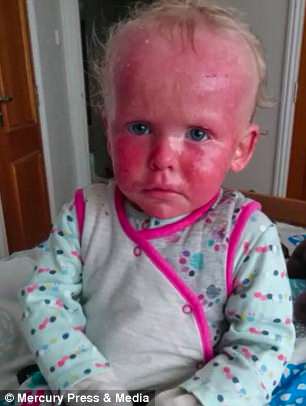 Maisie, who was conceived via a sperm donor after the couple spent eight years trying for a baby, first showed signs of it when she was four months old.

Mr and Mrs Buchanan first noticed a little rash on their daughter’s left cheek but didn’t think much of it.

Mrs Buchanan said: ‘We spoke to the health visitor who thought she might have been teething and rubbing her face but the mark got bigger and another appeared on her right cheek.

‘By five months her face was bright red. Her skin was beautiful all over but her face was red and sore looking.

‘Then it started to appear on her legs and elbows and the texture was very rough.

‘We took her to the doctor and were prescribed some steroid creams but it just got worse and there were more patches appearing on her body. They thought it was eczema. 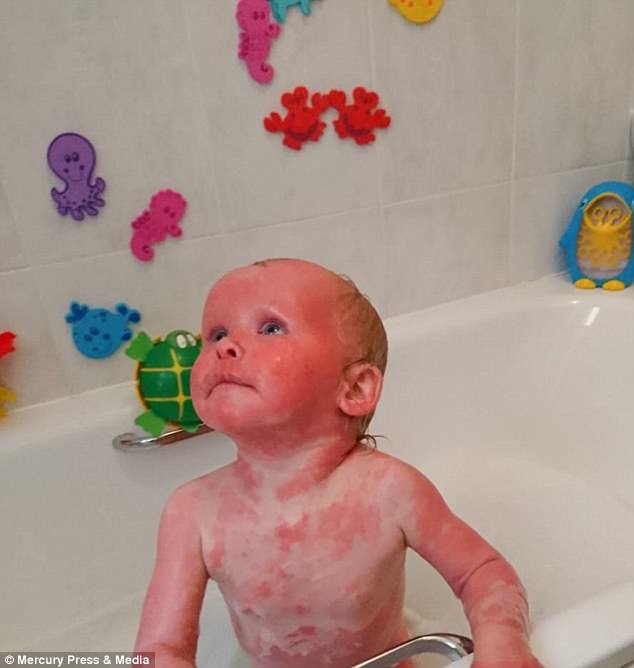 ‘We watched her body slowly get redder.

‘We were worried we had given her something, or that it was an allergy to the cat or that she was lactose intolerant.

These patches normally appear on elbows, knees, scalp and lower back, but can appear anywhere on the body.

It affects around two per cent of people in the UK and can start at any age but most often develops in adults under 35 years old.

People with psoriasis have an increased production of skin cells with them being made and replaced every three to seven days rather than three to four weeks.

The resulting build-up of skin cells is creates the patches associated with psoriasis.

Although the process isn’t fully understood, it’s thought to be related to a problem with the immune system.

The condition isn’t contagious and there’s no cure.

‘By seven months old it was all over her body. She was very mottled, red and flaky. Her skin was lobster red.

‘You couldn’t pick her up and changing her was a nightmare. She would just cry because she was in so much pain – it was like her joints were stiff.

‘We would slather her in lotions and bandage her up. It was half emollient and half cold tar substitute. It was nasty stuff.’

Mrs Buchanan said Maisie also started to lose weight after struggling to wean and doctors diagnosed her with ‘failure to thrive’ at the beginning of 2017.

The tot’s skin continued to worsen and she was admitted to the Royal Hospital for Sick Children in Edinburgh in February 2017 and stayed there for six weeks.

She had numerous blood tests, a liver biopsy and an MRI scan to try and find out what was wrong with her and after two weeks she was diagnosed with chronic infant psoriasis.

Mrs Buchanan said: ‘It was a horrendous time. She wasn’t eating properly and would cry in pain because her joints were sore. I was thinking “is my little girl going to survive this?”

After being diagnosed and treated she started to improve

‘We’re not sure if her struggling to eat was to do with the psoriasis. We think the two went hand-in-hand because she was in so much pain and didn’t feel comfortable or want to eat.

‘The fact that her joints were aching and she was stiff could have been from the psoriasis or because she wasn’t as active as other children.

‘She was on oral morphine and anti-inflammatory medication to help with pain.

‘We hadn’t heard her giggle in two to three months or see her smile because it was so painful. 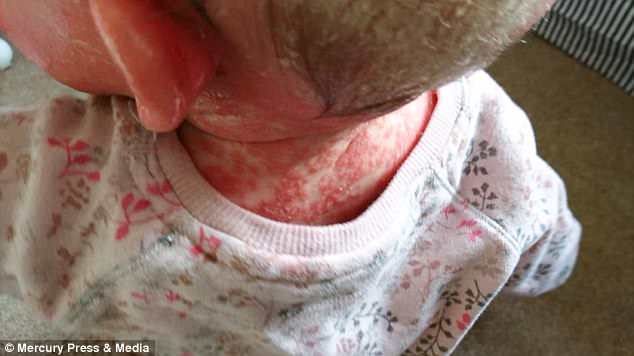 While Maisie was in hospital because her symptoms were so severe, doctors carried out numerous blood tests, a liver biopsy and an MRI scan to try and find out what was wrong with her 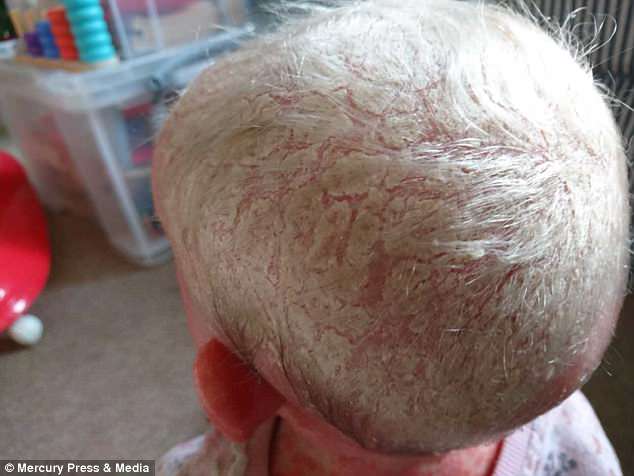 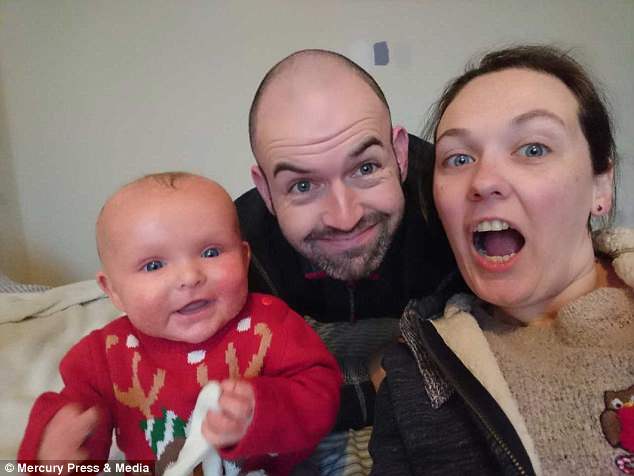 ‘When she smiled again it was like seeing the sun for the first time.

‘She started eating more and slowly started getting back on her feet. The medication was helping her a lot.’

Once a week a nurse now comes to inject Maisie with a powerful drug called methotrexate which suppresses the cells in her immune system that causes the psoriasis.

This also means blood tests every 10 weeks to ensure the medication isn’t damaging the tot’s liver.

Mrs Buchanan said: ‘She’s used to the nurses and the hospitals now. At first she would scream and cry uncontrollably when she got her injections but now doesn’t bat an eyelid.

‘She has to see so many different doctors – paediatricians and consultant dermatologists.

‘We don’t know what the progression will be, the doctors are hopeful that it will go away but we just don’t know. 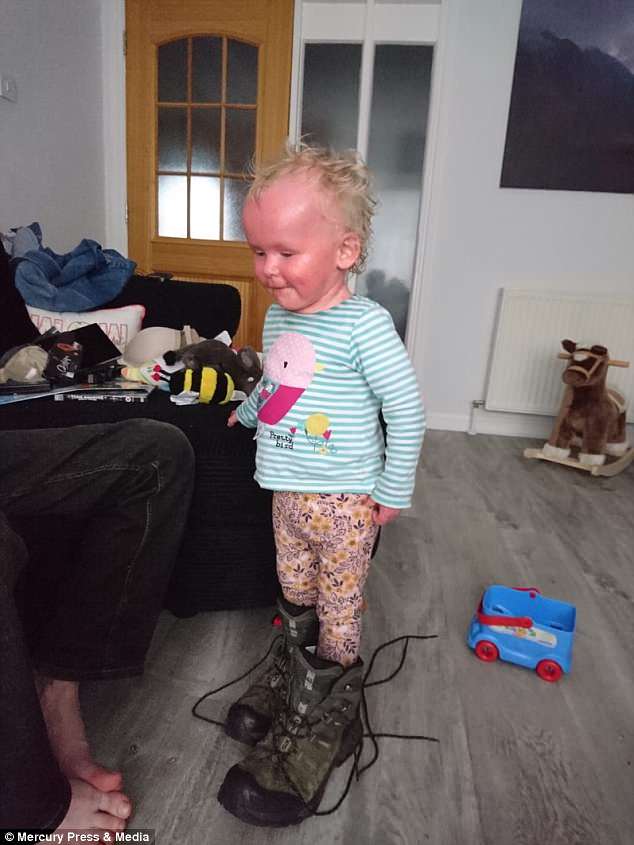 Despite her condition, Maisie’s parents say she is now ‘thriving’ and there is ‘such a change’ from when she was first diagnosed 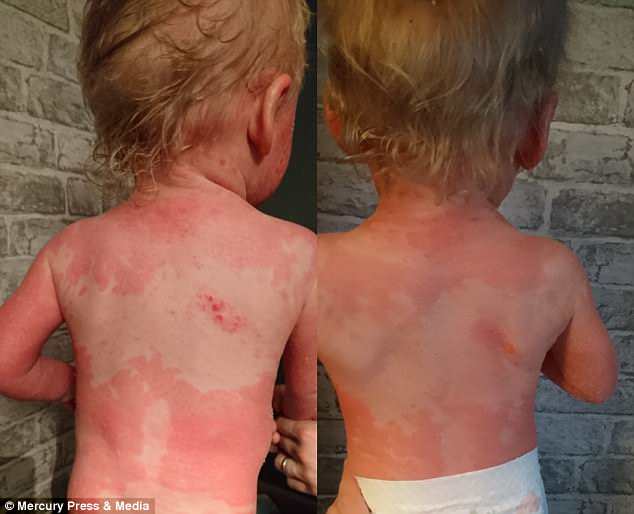 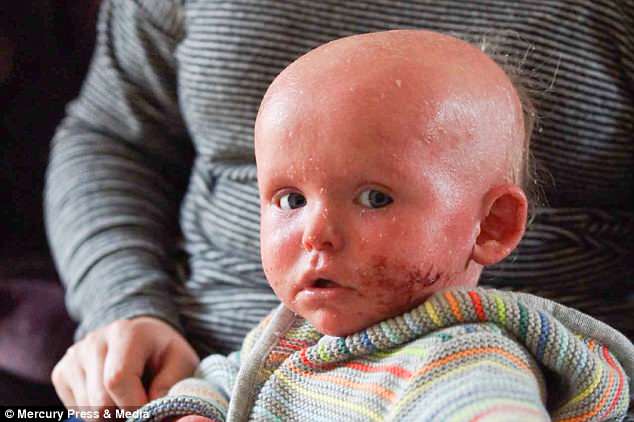 Mrs Buchanan said: ‘It may not be life-threatening but I want my daughter to be happy and be able to live a pain-free life’

‘She’s now got a dalmatian effect on her back and angry red patches but it’s definitely an improvement.

‘There are fewer flakes, she’s not as red and she’s not scratching as much.

‘Her face will still flare up especially if she gets warm she will get redder. Her face and neck are the driest spots now.’

Maisie is slathered in skin cream four times a day

Maisie’s routine now includes being slathered in cream four times a day and wearing special silk ‘scratch sleeves’ which are cooler on her skin.

She also has to wear mittens to try and minimise the damage caused by scratching.

Mrs Buchanan has to wash Maisie’s clothes more regularly because of the damage caused by the creams and ends up having to shake them out creating piles of dead skin.

She said: ‘When she was first diagnosed compared to what she’s like now – it’s such a change.

‘She looked like a little crab but now she’s this wonderful happy child.

‘It may not be life-threatening but I want my daughter to be happy and be able to live a pain-free life.

‘If I had one wish it would be for her to be comfortable in her own skin.’