Skip to content
HomeHealth NewsViagra could make you colour blind!

Taking too much Viagra could leave you believing everything is red, doctors have warned on the back of a new case report.

A 31-year-old man was left with red-tinted vision after taking sildenafil citrate – the active ingredient in the famous impotence drug.

The unnamed man, from New York, who admitted he swallowed ‘much more’ than he should have, has been left with irreversible damage.

The drug’s liquid form is marketed as being faster acting than pills and having fewer side effects, but is not sold by the official Viagra brand. 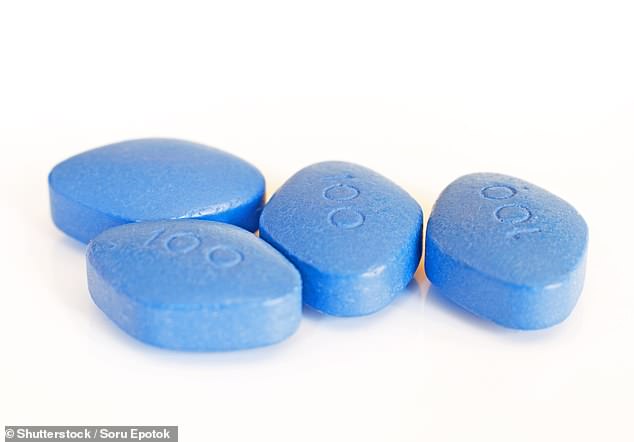 Experts warn taking too much sildenafil – which is best known as the active ingredient in the little blue Viagra pills – can have serious side effects, after a man who took ‘much more’ than the recommended dose was left with permanently red vision

The man turned up at an urgent health care centre and said everything he could see was tinted red and had been for two days since taking the liquid.

He admitted taking more than the recommended 50mg dose, researchers revealed in the journal Retinal Cases and Brief Reports.

And he said his vision began to change soon after he took the medication.

Detailed eye scans, in which medics used powerful imaging equipment for this purpose for the first time ever, revealed his retinas were physically damaged.

The scientists added the damage would likely remain for the rest of the man’s life because after a year of trying to cure it, doctors had no luck.

‘People live by the philosophy that if a little bit is good, a lot is better,’ said Dr Richard Rosen, lead author of the study.

‘This study shows how dangerous a large dose of a commonly used medication can be.’

Viagra is now available without prescription in the UK for around £4 to £5 per pill, and almost a million were sold in the first four months after it went on sale.

The active drug in Viagra has been linked to 19 deaths in the UK last year, the highest on record since 1999.

Sildenafil, the main ingredient of many erectile dysfunction meds, caused more than a dozen deaths in 2017 and is linked to seven so far this year, according to a report by the Medicines & Healthcare products Regulatory Agency (MHRA).

A majority of the deaths were caused by heart problems, including coronary artery disorder, irregular heartbeat and heart failure.

The findings come after it was reported nearly a million Viagra pills had been bought since it became legal to sell them without prescription in March.

The majority of men who report having side effects are men in their 50s and 60s.

A single 50mg pill is the normal dose, which should start to work within an hour and help men maintain an erection during sex.

But overusing the drug – which affects circulation to increase blood flow to the penis – can be deadly, and 19 people died in the UK last year as a result of using sildenafil.

And it is known to be able to cause problems with vision but they usually disappear within 24 hours, although the man in this case wasn’t so lucky.

Examination revealed damage to the cones in his eyes – the structures responsible for seeing colour – was similar to inherited eye disease seen in animals.

Dr Rosen added: ‘To actually see these types of structural changes was unexpected, but it explained the symptoms that the patient suffered from.

‘While we know colored vision disturbance is a well-described side effect of this medication, we have never been able to visualize the structural effect of the drug on the retina until now.

‘Our findings should help doctors become aware of potential cellular changes in patients who might use the drug excessively, so they can better educate patients about the risks of using too much.’

MailOnline has contacted Pfizer, the manufacturer of the Viagra brand, for comment.